Are Monster Solar Flare Disruptions On the Way? 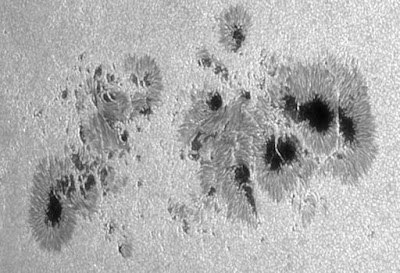 The news that a monster -sized sunspot group (see photo) is en route to the solar meridian and likely to generate enormous magnetic storms on Earth, now has most of the solar physics community's attention, as well as space weather forecasters. This attention is crucial because it enables us to not only forecast the next large sudden ionospheric disturbances (SIDs) but also auroral displays, and even possible electric power grid failures (such as occurred in Ottawa, Canada in March, 1989, when a monster flare precipitated an inductive energy discharge that melted transformer wires and wreaked havoc).

The current large spot group, located in active region AR 1339, is as big across as 17 Earth diameters, has already triggered a class X1.9 at 20:27 UTC on Nov. 3. If current forecasts hold, even more x-ray flares will be generated over Tuesday and Wednesday this week.

What indicators if any presage these eruptions?

In my early studies of the relation of sunspot morphology to powerful, geo-effective flares during Solar cycle 20, I found that a large magnetic shear was one major indicator if the photospheric neutral line (PNL, or the defined geometric line that divides magnetic polarities) was sharply skewed so the magnetic gradient attained a certain threshold value.

The magnetic gradient is defined:

where the numerator denotes the difference in the normal components of the photospheric magnetic field (between opposite polarities of the active region) as measured by vector magnetograph, and the denominator is the scale separation (x) between them. If I calculate grad B = 0.1 Gauss/km then I know a flare is 96% probable within 24 hrs. In nearly all such cases, one also finds the magnetic class of the sunspot group to be 'delta', or having the topology most likely to trigger flares.

For example one subsequent study investigated a relationship between solar eruptive events and the existence of the coronal zeroth points (e.g. magnetic null points) of the B-field, using a collection of over 1800 vector magnetograms. Each of them was subjected to a charge topology analysis, including determining the presence of coronal zeroth points. Note that in such analyses the foot points of magnetic loops (of which spots are the cross sections seen in our line of sight) are stipulated as “poles” that are presumed to bear a homologous relation to “magnetic charges”

For instance, in one "quadri-polar" analysis by Somov et al (1998) a series of magnetic charges were specified as:

Where the capital letters on the left denote the identified loop foot points and the other 'e' identifiers on the right specify the respective magnetic "charges or polarity centers.

We will wait for the magnetograph data on the current large group and hopefully, soon be able to predict when its major magnetic storm effects will manifest, if not exactly where!
Posted by Copernicus at 9:38 AM