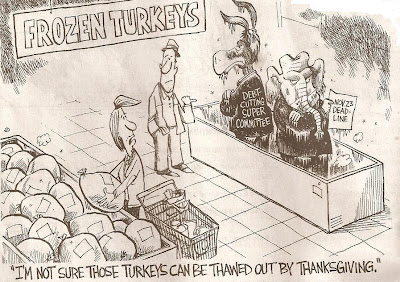 The sober news coming out of D.C. right now is that the much touted "Joint Deficit Reduction Committee", aka the "super committee", will end up with a big fat nothing to show for its efforts. They would have to finish a deal tomorrow in time for a final vote, because the laws governing its operation demand a 48-hour time interval between said vote and the deadline of Nov. 23rd. This ain't gonna happen, at least not in any valid way that's not based on smoke and mirrors gimmicks.

This means that there will be automatic cuts enacted in 2013, with $600 b for military-defense cuts (at least on paper, though I understand they will have leeway to cut other items in the budget and call it "defense", such as border patrol and immigration, Homeland Security and even Veterans' health care) and another $600b for social spending or what are quaintly called "discretionaries".

Leaving all the bullshit aside, this means the real work of congress remains, which is to establish whether funding continues for several key proposals, or is sliced. Among the items up for addressing: whether or not to adjust the AMT or "alternative minimum tax" levels, else the middle class will be clobbered with a new tax hit originally intended for the wealthy; deciding on whether or not to cut Medicare physicians' pay by 30% ; deciding whether to continue the 2% payroll tax deductions for another year, and deciding whether to extend 99 weeks of unemployment benefits for 3.5 million laid off workers.

If ALL were to be allowed, then we'd see an annual increase of $300b to the budget which is already under fierce scrutiny by Tea Bagger austerity fetishists, and the credit rating agencies and bond markets. But I would argue all need not and should not be allowed.

The ones that merit approval, and the reasons are as follows:

i) Extension of Unemployment Benefits:

Reason: Next to food stamps, this is the most stimulative device to pump up a moribund economy. The reason is people will spend the money right away, for mortgage payments, gas, groceries, school tuition...whatever. It is the ideal fillip in a low aggregate demand environment. Yet the Repuke House is almost certain to kill it or disallow it, unless the Dems cave again like they did last year on the Bush tax cuts. This would set up a near Hobson's political choice: extending the unemployment benefits for a year at a cost of nearly $75 b, or extend all the Bush tax cuts at a cost of $3.7 trillion over ten years.

Unfortunately, if such a Satanic deal is offered, the Dems and Obama have no choice but to eschew the 99 weeks extension this time. In the immortal words of Spock: "The needs of the many outweigh the needs of the few...". Translation: national fiscal stability (affecting over 200 million people) achieved by finally killing the Zombie Bush tax cuts trumps any deal that would disallow it and immediately affects only 3.5 million (or maybe 20 million by higher money circulation).

This has been done pro forma the past decade or more and it would be a tragedy of stupendous dimensions if not done again. Adjusting the AMT basically means raising the ceiling at which it is triggered. Recall the AMT is a parallel tax system that kicks in beyond a certain threshold (about $59,000 adjusted gross income last year) . If it kicks in, you have to trash your usual tax deductions etc, and use the higher tax options dictated by the AMT. To see if it's caught you, you need to download form 6251 from the IRS site, http://www.irs.gov/

Since its inception in the 1960s, the AMT or 'Alternative Minimum Tax' has never been inflation adjusted, so will trap as many as fifty million more middle class people by 2012 if not adjusted to a higher ceiling. Only 5% of the AMT comes out of the hides of those earning more than $1 million a year, or those part of the 1%.

Meanwhile, The Brookings-Urban Institute prepared a study that showed that in 2010 some 97% of families with 2 children and whose income is between $75,000 and $100,000 were forced off the regular tax system and onto the AMT system.

But beware! The Repukes may also well try to use this as a chip to get what they want, i.e. in extending the Bush tax cuts.

This ought to really be a no -brainer. I mean, it's difficult enough as it is for many older folks to find Medicare physicians, that is, the family practice drs. By cutting physicians' Medicare compensation another 30% it will be almost impossible for any new beneficiaries to secure the service of first line doctors.

In other words, they will be left with a hollow benefit.

NO - to the payroll tax 2% cuts for any longer!

On the other hand, the one approval we can do without - and which ought to allowed to expire - is the 2% payroll tax cut. While it's touted as a way to stimulate the economy it is too small for most workers to notice in their paychecks, and hence they are more likely to save it than spend it.

Meanwhile, it is actually eating away at Social Security receipts, you know the monies which pay for current beneficiaries and will have to cover the Boomers. Worse, the GAO has already said that S.S. will be unsustainable even in the short term if this defunding continues along with many more people taking Social Security disability insurance.

What all this means is that if these dire trends continue, the funding of Social Security will have to depend upon congressional appropriations - and we know and have seen how that's worked out.

Let us hope that our congress critters do the right thing in the next few weeks, and we don't have to be subjected to another loud verse of 'Send in the Clowns!'.

As for the super committee, anyone with a grain of sense would know it couldn't succeed when one side- the GOP six- was dug in on no revenue increases, having signed a 'no taxes' pledge compliments of Grover Norquist, i.e.

Let's hope that in the new year more fiscal resposibility prevails than we have recently seen, but I wouldn't hold my breath!
Posted by Copernicus at 1:47 PM