The Shredding of the Social Contract (1) 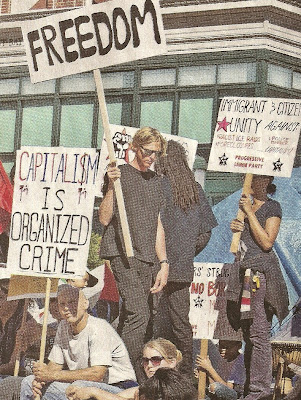 "We should cease making speech after speech accepting that our fate and the fate of the world, will inevitably be decided by impersonal, market controlled forces and the sooner we accept this the better off we will be. Instead we should be denying most strongly, in every forum available to us, that such a fate is inevitable... That instead the world deserves a better future than the one on offer from the ruthless money men and sleaze-ridden free trade marketeers, who are making this terrible bid to dominate the world."

As this is being written a global cancer is spreading across the planet- engulfing whole populations in its wake, and destroying the cohesion of societies and the integrity of the natural environment. This cancer is inured to suffering and distress, whether of people or the planetary home and natural environment they inhabit. All it cares about is its own aggrandisement and accumulation of monetary wealth, capital at the expense of environmental sanity and labor fairness.

Students who've been highly educated and hold college degrees, facing massive loan payoffs? This global capitalist cancer could care less! The reason is that its essence and malignancy is dictated by debt, and the greater the debt and the more varied it is, the better -from student loans, to mortgages, to credit cards.

The enormous forces currently at work, fueled by manic speculation and debt, seek to re-shape geopolitical boundaries along dictatorial market-imperialist lines. Lines from which multinational corporations and capital govern and rule, rather than governments. The violent episodes of public reaction in Greece are merely at the surface of what lies in store for the planet, if we allow these maniacs to leverage control of our lives.

All these, in toto, bespeak an encroaching economic fascism that has now arrived under the face of the 'market' and multi national corporate hegemony, economic oligarchy- deploying financiers, investment bankers and creditors rather than stormtroopers. And dollar (or euro) signs instead of swastikas. One in which no borders, of any country, are impervious to the reshaping - whether in terms of mergers, downsizings, or progressive indentured servitude of the workforce, or sacrifice of hard-won environmental laws to stealth investment legislation sponsored by transnationals. A 'New World Order'.

In this blog and the next two in this series, I wlll examine in detail the core of the problems we are facing as a nation (or perhaps more accurately, segment of a nation) that still values social justice, upward mobility and equitable access to resources. I will also show what sort of beast the Occupy Wall Street protestors are confronting, and how this beast became what it is today - also why stopping it cannot be a localized strategy - but must be accomplished on a global level.

It was sometime during his presidency that former CIA Deputy chief George Herbert Walker Bush sounded the words "New World Order". He didn't have to amplify it or explain it, because those elitist enclaves that would wield its power knew already what it meant: citizen subservience to corporate "persons" rule, and economic fascism disguised as "free market" Neoliberalism. The aim? To deliver to this Neoliberal pseudo-free market artifact a world of serfs, some willing, some not so willing.

But Bush and others of his ilk knew the only way to achieve this was via a cancerous process called "globalization". This would become the great equalizer and enable impersonal market forces to remove freedoms and all hopes for economic mobility and security. Understanding this is crucial to understanding what the Occupy Wall Street protestors are up against, because in this sense "Wall Street" is just the visible tip of one small iceberg and agent for American ruin, but not the whole! The whole extends to the entire network of unaccountable central banks throughout the world, traced back to the Bank for International Settlements.

Most naive people, when they hear or see the words "New World Order", smirk and smile then think of some looney conspiracy theorist alone in his mom's basement churning out tracts on "black helicopters" and UN prison camps. But this is in fact the hyperbolic lunacy that the real New Worlders wish people to pillory: a deliberate exaggeration to conceal their own ambitions. In fact, this World Order doesn't require black helicopters or UN invaders at all, merely mobile capital that can wend its way across any borders and upend any social contracts at will by allowing capital to outbid the indigenous populace and its rights. The New Worlders know full well that in any competitive bidding war between capital inflows, it will be the one ensuring the fastest race to the bottom that prevails. And no one will be any the wiser.....because it's money via electronic trades and transfers.

Thereby, the workings of the global bond markets, for example, can reduce or remove from the world's social markets much of the freedom their own governments exercised in the past to pursue counter-cyclical economic policies. Thus, in the present era of low aggregate demand, the U.S. would have been able to pursue Keynesian stimulus policies - since we are in a balance sheet recession- and this could have pumped hundreds of billions in for public works to create new jobs. But.....the bond pirates have decreed austerity measures instead, so nothing is done to prime that pump that specifically can engender more jobs and we remain steeped in unemployment.

In effect, the bond marketeers, their rating agency allies and other more nefarious central banking interests, have forced governments worldwide to retreat into a pre-Keynesian world of minimal economic efficacy, even as their populations grow increasingly restive and furious. Governments like Greece (and the U.S.) are thereby left to wait out disruptive downturns in economic activity whatever their social and economic costs. And meanwhile, the one percent - including many bond traders, investment bankers and investors in hedge funds - conceive of ways to use credit default swaps to bet on government failures as their populations erupt.

By penalizing any government which attempts to employ a reasonable and rational Keynesian stimulus - such as has been proposed by Obama in his $447b jobs bill- the market forces (including their regressive political allies like the GOP and billionaire-funded "Tea Party") ensure that those same governments are forced to respond using only the disastrous and deflationary measure of expenditure cuts, including cuts to social benefits. Thereby the global bond pirates profit while populations become more destitute and insecure.

The global capital markets do even more than this: they effectively make any form of social democracy moribund. This social democracy embodies a hearty progressive taxation or deficit -funded full employment (i.e. at least at the 4% level) and healthy, consistent benefit levels - including for welfare recipients. But thanks to the global capitalist pirates, all of these are being unravelled at once! Taxes are now their lowest level for the wealthiest in more than a generation and more tax breaks are to come (if the Bush tax cuts are renewed), and deficit funding is anathema, while Social Security, Medicare and Medicaid are on the chopping block for an unelected, un-Constitutional super committee.

The problem is the existence of social democratic principles, and by extension social justice, cannot survive an open-global economy. Indeed, only within a closed economy can we see first hand if principles of social justice espoused in that country can work and persist. In fact, it is only within a closed economy that any kind of egalitarian spirit can even be remotely enforced. Meanwhile, in every case those "open economies" (the wet dream of the Neolilberal) undermine egalitarianism (including quality jobs for all) by virtue of the freedom of capital to march in and conduct impersonal bidding wars without popular consent. Worse, with no transaction taxes on this bidding, there is no accountability whatsoever! Because no costs are applied, not even ¼ a penny tax per trade, the bond pirates or multinational corporations can infuse as much capital as they want - or can bet on (via trading derivatives in credit default swaps) to bring a country to its knees. Meanwhile, if a nation does attempt to defend its citizens' labor rights vs. inflowing capital, the World Trade Organization or WTO can be appealed to on the basis of the impertinent nation enabling "trade impediments".

If then money or human capital can be allowed to migrate or move to wherever it wants on the planet, it will most often choose those places where labor and health costs are lowest, or the regulations that support them are minimalist. In this way it will maximize its profits and hence maximize its capital for further bidding wars elsewhere. This is a prime reason why millions of college educated Americans are out of luck on the jobs scene even when this recessionary period ends. With 2 billion competing, lower cost workers in China, India and Russia, there's no need to tap any but the cheapest labor - even for high grade skills!

The reason is that the Neoliberal lords of the "New World Order" and its mobile capital have declared their (students') labor comes at too dear a price, including the rights attached to their labor. Far preferable to move it to India, China or Mexico where capital impingements are not so great. The students, meanwhile, end up in a deeply leveraged quasi-proletariat which can easily be exploited for temporary labor when the need arises.

Finally, let us bear in mind that NO "free market" exists! It is a construct of the PR establishment and used to spread false consciousness, so that those caught up with no jobs and no prospects will tend to blame themselves as opposed to the rigged economic system. The fundamental attribution error.

"A free market produces results that favor the health of society as a whole, because an essential balance is maintained. But in a coercive market, the balance is destroyed, the earning power of work and the standard of living of workers declines, and society as a whole is devastated while those with economic power gain an ever more unbalanced share of the nation's economic wealth"

This is exactly what we have with the top 1% controlling 57% of the nation's wealth, and 400 billionaires with the same monetary resources as 150 million fellow citizens!

Now, magnify this coercive market to the global scale and you have a global cancer! Ian McDonald again, writing in The Barbados NATION (Aug.14 1998):

"Do we really believe for one moment that those who preach free trade and the inevitable triumph of market forces have anything other than their own increased wealth and aggrandizement in mind? Do we honestly believe they think the system they espouse is fundamentally a good one for all concerned? Are we so naïve as to think if, by any chance, the system were to operate against their interests, that they would not make sure it was changed or abridged to suit them? Are we so innocent and trusting that we cannot recognize bullying and crude self-interest when our noses are being rubbed in it constantly?"

Author Willaim Grieder's take is equally pungent (One World Ready Or Not: The Manic Logic of Global Capitalism, p. 401):

"It does not require great political imagination to see that the world system is heading toward a further dispersion of governing power so the closet dictator of the marketplace can command things more efficiently, from everywhere and nowhere. The historic paradox is breathtaking: At the very moment when Western democracies and capitalism have triumphed over the communist alternative, their own systems of self-government are being gradually unraveled by the market system. "

"Like feudal lords, the stateless corporations will make alliances with one another or launch raids against one another's stake. They will play weakening national governments off against each other..... In that event, vast throngs of citizens are reduced to a political position resembling that of the serfs.... "


Next: How the Global Corporatocracy is already making serfs of us all - via permanent unemployment
Posted by Copernicus at 10:01 AM