Stephen Hawking's Simple Explanation for How the Cosmos Originated...Godlessly! 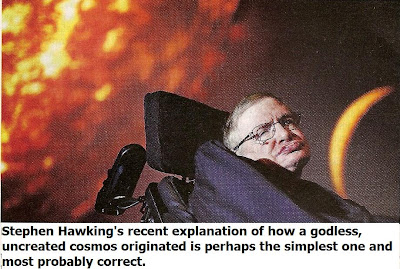 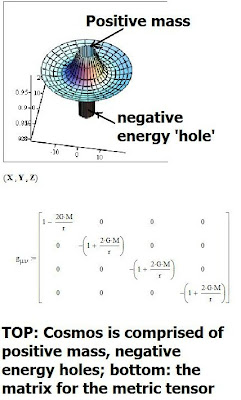 Last night's Planet Green documentary on God and the Origin of the Universe in their 'Curiosity' series, was excellent, and perhaps Stephen Hawking's most masterful explanation yet for why no extraneous agents are needed to explain the origin of the cosmos. By the end of the program even a person with no mathematical background could grasp Hawking's simple arguments which followed from gravitational time dilation, e.g. the slowing of clocks as experienced near black holes or other gravitating masses, basic logic to do with time....as required for causality-causal nexus, and simple illustrations, examples. Altogether it was bot an entertaining and informative hour.

The program began with a look at Norsemen and how they viewed solar eclipses as terrifying actions by a particular unfriendly god in trying to eat the Sun and starve it of light. To these primitives, without any understanding or appreciation of astronomy or the movements of the the Moon, Earth in relation to the Sun, it had to be a "god" that took away the sunlight. Today, with our knowledge of celestial dynamics, we know this is nonsense. The Sun's light vanishes for a brief interval simply because the Moon passes directly in front of the Sun in our line of sight and the time interval elapsed for darkness (totality) is defined by the proximity of the Moon to the Earth at the time. The closer it is, the larger the angular diameter and the longer the time the Sun's light is blocked. No mystery! No gods needed!

Hawking argues the origin of the cosmos, and especially the Big Bang arose in a similar fashion of being shrouded in mystery, and superstition. He even recounts how Pope John Paul II warned against trying to investigate the "moment of creation" at one cosmology conference Hawking attended at the Vatican. Now after 3,000 years we no longer require artifacts - divine or other to grasp it. Still, the very concept of an uncaused universe beggars many people's imaginations and intellects to the point of madness, or at least strenous objection...via appeals to "common sense" (despite the fact most of modern physics is beyond common sense!)

Understanding Hawking's arguments even at a basic level, requires a few preliminaries. First, at a basic logic level, we agree and understand that to have causal agents or causality we require time. If there is no time evident or existent, then there can be no nexus or connection from event A to event B. It is time- the chronometric passage of some interval- which allows one to say, e.g.

If on the other hand, the two events occurred with no time passage, one wouldn't be able to infer causality, say that Event A "caused" B.

Second, we need to grasp at least at a qualitative and rough quantitative level that time slows down in the vicinty of gravitating masses. The way this is approached is usually by using what's called a "metric tensor" such as shown in the bottom half of the lower diagram There are 16 components in this tensor, each of which can be measured by means of clocks...atomic or other. For the form of the metric tensor shown, we have elements conforming to a spherically symmetric distribution with r the radius or distance from the center.

To operate in a typically curved space-time (x,y,z,t) one will usually use what's called the "interval" such that:

The key component used in gravitational time dilation measurements is the one at the very upper left of the matrix which we denote by g_oo. All experiments on gravitational time dilation can be regarded as direct measurements of the g_oo component of the metric tensor. For all comparisons with actual experiments, it's convenient to express chronometers at two different distances, say:

it's convenient to use fractional deviations, e.g.

The clock rate can also be related to the frequency f. If a clock registers a large elapsed time it must be ticking fast, and if a small elapsed time, ticking slow. Thus the frequency difference, delta f, must be proportional to delta τ, or:

Cutting to the chase and sparing readers a lot of algebra, one ends up with:

As a terrestrial application, say delta r = 10 km (the typical height attained by an aircraft) the time dilation is:

Now switch to the Hawking's black hole example, and one finds as one approaches the center of the hole, at which r = 0, there is no time, period. This is also the point of maximal gravitational acceleration, call it g = oo, or infinite. Thus:

In the above we have assumed the reference clock is right at the black hole center, and the difference is now 0. Then the time elapsed is zero. This is confirmed - well, the tendency of clocks to slow in g-fields is confirmed by hydrogen -maser clocks and others. (See, e.g. 'Gravitation and Spacetime', by Ohanian and Ruffini, p. 183. In effect, one simply extrapolates to the most extreme g-field, present in black holes, to infer no time passage that can be reckoned by any chronometer.

If there is no time passage, there can be NO cause! There can be nothing which causes the universe in the first place, hence...no God. Since we already agreed that for causality to operate time must exist, then conversely, if we find time doesn't exist then there can be no cause or causal agent.

Hawking's final argument, illustrated by the top illustration in the lower diagram, is simply that the cosmos (originally with less diameter than a proton) simply "popped" into existence much like we currently observe particles in pair production doing the same via spontaneous quantum fluctuations using the energy-time uncertainty principle. The basic principle underlying these pair production processes is the energy-time uncertainty principle: dE dt > h/2π where h is the Planck constant of action. . Thus, a brief fluctuation occurring over time dt can produce a change in energy dE, which may be sufficient to produce particles. The energy has an estimated magnitude given by the uncertainty principle.

Hawking's other point is that the manifestation of mass in the cosmos always has a complementary action in forming negative energy. He used the analogy of a person forming a large mound or hill by digging into the ground. The larger the hill formed, the bigger the hole from which the hill was excavated. All that negative energy is now scattered across space, as bound systems via gravitational potentials. These potentials represent negative energy reservoirs. For example, gravitational potential energy, say associated with a planet's g-field might be expressed: V(r) = - GMm/r.

If all the positive and negative energy contributions are tallied, the total comes to zero. This zero energy indicates that no agents acted to create the cosmos. We didn't need a "hole digger" to get positive mass from "digging a negative energy hole" because it already inhered in the subatomic cosmic hyperdense state. Moreover, we're still seeing -observing the effects of the initial repulsion of the unstable primeval "atom" as all parts of the cosmos continue to accelerate during the expansion of space.
Posted by Copernicus at 9:56 AM