Were The Neanderthals "Absorbed" by More Modern Humans? 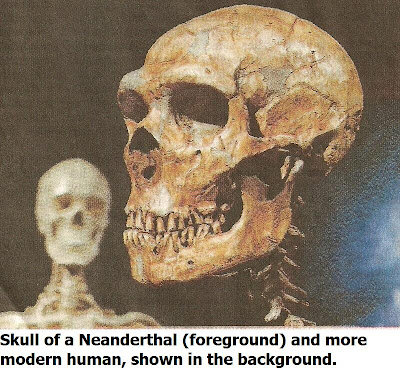 The riddle of how the Neanderthals essentially vanished from the face of the planet barely 30,000- 50,000 year ago has remained a mystery that has given rise to a number of speculations and theories. Among them: that the Neanderthals were simply too dumb to keep up with the newer invading Cro Magnon, and were exterminated by them. Another one: that the invaders reproduced much more rapidly and in the competition for scarce resources, the primitive Neanderthals lost out. The greater Cro Magnon numbers meant that they garnered most of the available sources of food, leaving the Neanderthals with little.

Now, recent research conducted at the University of Colorado- Boulder, and UC-Denver, appears to scotch both of these theories. Based on detailed computer modeling, as well as genetic analysis (from the human genome) it appears the Neanderthals were simply absorbed into the moder modern humans. By "absorbed", I mean that their unique phenotype (see image, e.g. for the skull) became non-existent after extensive interbreeding with the modern modern humans.

Supporting this is the finding (from last year) that 1 to 4 percent of modern human genes, mainly in Eurasian peoples, are "leftovers" from Neanderthals. (Evolutionary biologists consider that residual gene percentage the proof of breeding between the two distinct species before the Neanderthals died out roughly 30,000 years ago)

Meanwhile, the computer models were run over 1,500 generations, based on estimated samples of humans and Neanderthals roving across Europe and Asia. One parameter in the model included the researchers' knowledge that the last ice age forced Neanderthals and modern humans to widen their search for food. The computer models show interaction, but because there were far more humans (something like a 10:1 ratio) over time the mating diluted Neanderthals until they emerged as just a minor fracton of our DNA.

Ancillary aspects of the new study also disclosed the Neanderthals were not the dumb, sluggish beings that many still portray them as. They were intelligent, at least enough to continuously keep fires burning, which had formerly been believed to be beyond their reach. This display or aspect of intelligence would have also argued for their prowess as respectable mates for some of the more modern humans, probably the females.

Perhaps it's now time to give them the respect they're due!
Posted by Copernicus at 1:38 PM