Why the Aversion to Math in Science Exposition? 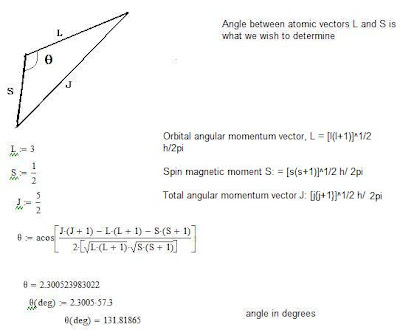 Top graphic: Energy levels E1, E2, etc.quantified by wave function for a quantum mechanical "square well". Below: calculations to work out the angle between L, S vectors in L-S coupling. 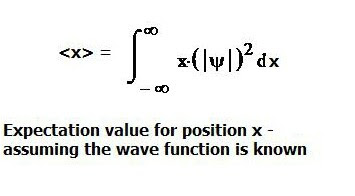 For anyone who's actually read Stephen Hawking's book, A Brief History of Time, who can forget his half joking reference in the Introduction to his Bantam editors who warned him that every equation included in his book would halve his sales. Having digested that, Prof. Hawking punted and included only one single equation: E = mc^2.

Now, a new book entitled 'The Quantum Universe: Everything That Can Happen Does Happen', by Brian Cox and Jeff Forshaw, purports to reverse this anti-equation, anti-math trend by liberally sprinkling equations throughout the text and avoiding the yen to dumb down books merely to appease pointy headed editorial bean counters and anti-math wags. This is just as well, because no decent book on quantum mechanics can avoid math given that QM is perhaps the most quantitatively based theory we have.

Further, I'd argue that without at least basic algebraic forms to show QM relations, say between energy levels and principal quantum number, n, one will not appreciate the quantum basis of the theory which is quantized energy. It is one thing to be told that energy is quantized into discrete packets of a certain size, hf, where h = 6.62 x 10^-34 J-S is the Planck constant, and f is the frequency of the radiation, it is quite another to work it out in a lab from spectral and other observations using the basic Bohr energy formula.

Thus it is that I sometimes compare those who can interpret quantitative forms, equations, graphs in a physics book, thereby gaining a much deeper insight, with readers that can go through a book like Thomas Mallory's Le Morte Arthur (special illustrated version) and mine its words as well as the sketches. While someone with only minimal vocabulary will stick exclusively to the images. Images are nice and convey some of the story, but they can't convey the entirety.

The authors Cox and Forshaw, quoted in an article in The Economist (Nov. 5, p. 101) give the reason for including all the math equations:

"We included the maths mainly because it allows us to really explain why things are the way they are. Without it, we would have to resort to the physicist- guru mentality whereby we pluck profundities out of thin air and neither author would be comfortable with guru status."

This is exactly spot-on on and why the inclusion of appropriate equations and graphs enriches and enhances the material- especially in physics- as opposed to diluting it. It's also a big reason why theoretical physicist Roger Penrose tossed all caution to the wind in writing his massive, hyper -mathematical tome: The Road To Reality: A Complete Guide to the Laws of the Universe(which includes tensors and pseudo-tensors as well as complex algebra and residues), which comes in at 1099 pages.

Penrose's book is a masterpiece for anyone who wishes to really understand modern physics, from the curvature of space-time in general relativity, to quantum indeterminism, entanglement and the uncertainty principle, to the Big Bang, non-Euclidean geometry (to describe the cosmos' shape) and even the 'no-boundary' model of Hawking and Hartle. As the cover jacket puts it, in one of three objectives accomplished (and I fully concur): "evokes the extraordinary beauty that lies in the mysterious and profound relationships between these physical behaviors and the subtle mathematical ideas that explain and interpret them."

Was Penrose fearful of overdoing it equation-wise? Hell no! Not with more than 4,950! He believed, as I do, a person seriously invested in what makes the cosmos tick will expend the effort - via the underlying mathematics needed- to find out, and thereby gain a much fuller appreciation. Is he thereby writing for the "masses"? No, of course not! He is rather writing for that (not too tiny) segment that appreciate a hefty book which includes not only terrific description but the math to flesh it out.

Of course, The Economist is evidently unsatisfied with authors Cox and Forshaw in their reasons for including the equations. As the reviewer puts it (ibid.):

"That stance might comfort the authors but to many readers they will nonetheless seem to pluck equations out of thin air. Yet their decision to include some of the hard stuff leaves open the possibility that some readers might actually engage in the slog that leads to the higher pleasures."

Indeed! And that was found exactly to be the case for those who purchased Penrose's 'Road to Reality' because they wanted at least a glimpse of that road and some understanding, not just pabulum to make them think they grasped the essence of cosmic laws when they'd done nothing of the sort.

Further, if it is true that some readers might think equations are "plucked out of thin air" then that is a sign that perhaps some steps in reaching a critical equation were omitted. By contrast, Penrose excludes no such steps and for more completeness he even appends questions for readers in his footnotes to ensure they are following!

Sadly, mathophobia is all too prevalent on the planet, even when people are confronted with basic algebra. This makes me believe that the level of math education has not been all it can be. Kids then left the grade school or high school environment with a pathological fear of the slightest hint of a symbol x, y or z- almost as bad as some people harbor for spiders. Eliminating this fear probably will take much more effort than many educators can give, but one hopes that very soon it will be eliminated ....certainly in the near future.

Mathematics is too important an area, irrespective of which context one sees it in.
Posted by Copernicus at 9:21 AM