Why None of the Repuke Clowns is Electable 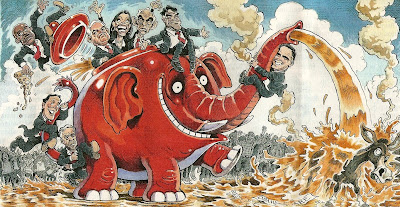 It is a sad thing when a major American political party, attempting to ascertain a presidential candidate for one of the most important elections in a quarter century, comes up with nothing but clowns. But alas, this is truly the case. The GOP, or "Grand Old Party", aka the Republicans, has managed to field a majority of clowns - excepting Jon Huntsman - who at least is one candidate with his head screwed on straight (though he has zero chance of getting the nomination).

But who else do we have on the GOP side? Well, there's Rick Perry who couldn't even recall (in his last debate) the name of the primary federal agency he wants to abolish once elected, which is responsible for approving most of his state's oil drilling leases and regs. In a horrifically awful 54 seconds captured on Youtube, this guy was not able to name this third agency (Dept. of Energy). Of course, now he's poking fun at his misstep, which I suppose is the only thing he can do - and others are saying he developed "brain freeze" which anyone can. This is where high anxiety in a stress situation disables the prefrontal cortex and causes speech lapses.

I understand all that, but absolutely shudder at the thought of this happening during high stakes, high pressure talks on nuclear disarmament with the Russians, or extending the current treaty provisions to regulate former Soviet ballistic missile sites and materials, warheads. Those are situations where "brain freeze" is simply not an option! Moreover, what if during one of these confabs - and at the most critical juncture - Perry's brain permanently locks up and he can't end negotiations on his own?

Then there have been Perry's other fiascoes, including warning Ben Bernanke to never ever step foot in Texas, or else....comparing the Fed Chairman's quantitative easing policies to "treason" - and we know what happened to JFK in Texas in November, 1963 after most wingnuts there declared him guilty of "treason"!

Perry has also compared Social Security to a "Ponzi scheme" despite the fact the program has been around for 76 years and never missed a payment, and also that everyone who uses the system know that current beneficiaries pay for current retirees benefits. That was how it was set up, like most other national social insurance systems.

Then there is the serial female sexual harasser and erstwhile pizza magnate, Herman Cain. Even after four women have come forward, and Sharon Bialek went into details on how this putz groped her and tried for more, he still denies it or suspects some quasi-liberal "racist" plot. He believes it's all a sordid effort to keep him off message. Well, from what? You mean your "9-9-9" plan, Uncle Hermie, the one that promises to financially ruin this nation in nine months?

After Cain we have the brashly bloviating Michelle Bachman, who really ought to be history by now after Newsweek published that psychotic photo of her on its front cover some months ago. This is a woman who has no clue of basic political or historical facts, and once inadvertently claimed to be from the same little burg in Iowa (during the Iowa caucuses) as John Wayne Gacy the horrific child serial rapist and murderer. Do we really want this quasi-religious fruitcake sitting anywhere near the "football" - the device that receives the codes to dispatch the nuclear missiles?

Then there is Mitt Romney, the guy that was for Obama's healthcare plan before he was against it. He implemented a similar plan in Massachusetts, mandating that all residents buy insurance, but appears to have suddenly developed severe memory lapses. Romney has also openly declared he wants to double the defense budget which is already sucking up 59 cents of every dollar. Hey Mitchie, after you double that Pentagon budget, will you have enough left to provide 190 million Americans with food stamps? Or, will you let them get their eats by dumpster diving?

The Economist ('A Dangerous Game', Nov. 5, p. 31) , was quite correct when it summed all these loonies up as "the new Jacobins" because that's exactly what they are. They all signed pledges from Grover Norquist never to raise taxes and are all trying to outdo themselves to see who can brown nose the most for Tea Party votes. Fortunately, a new book is due and just in time for this next election: The Tea Party and the Remaking of Republican Conservatism, by Theda Skocpol and Vanessa Williamson of Harvard. They show that the emergence of the Tea Party was "just what the doctor ordered" for a group of billionaire ideologues including Charles and David Koch of Koch Industries who "lost no time exploting the movement's anger and energy".

As they note, the aim was to "turn the Tea Party movement into a permanent grassroots army and mount a hostile takeover of the Republican Party".

This is also why the Occupy Wall Street movement, which I agree needs to remain apolitical by composition, nonetheless needs to confront the Republicans and the Tea Party as the front faces of Wall Street and the Globalization mandate.

These morons are also undaunted by prospects of Republicans altering their entitlements, benefits because they claim the main candidates don't wish to do anything to affect the program for them - only the age 50 and younger folk. Think again! If Herman Cain is elected and his "9-9-9" flat tax is passed, which includes cutting out Social Security and Medicare payroll taxes, there will be NOTHING to support your benefits! Where the hell do you think your S.S. checks are going to come from - on trees?

Ditto if Perry gets in and privatizes the system for the young. That will require, by AARP estimates and TIME's, nearly $6.5 trillion be removed from the existing system to set up private accounts. With that degree of hollowing out, these jokers that put any repuke in as president will see maybe $100 a month, if they are lucky! And that's if a COLA is retained!

Only a senior who's ignorant or in early Alzheimer stages would cast a vote for a Republican next year! And given this current pack of clowns, any one who would is either clown-proofed, or so racist in their reaction to Obama that a no-Obama reaction vote is all they have left in their quiver. And if that's the case, old timer pro-Goopers, be afraid, be very afraid!
Posted by Copernicus at 1:26 PM