The Shredding of the Social Contract (3): Why the Elites Fear OWS 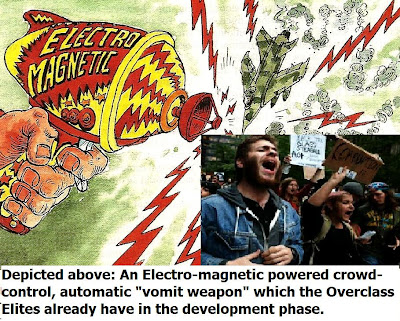 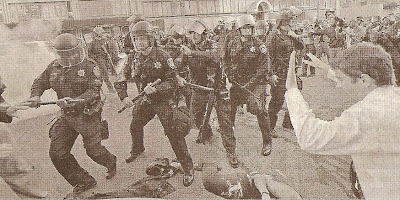 We have seen the ripples, conflicts and the face offs, fights ...between the police (acting as the pawns of the political elites) and Occupy Wall Street protestors, from NYC, to Philly, to Oakland and places in between. But few yet understand what drives the fear that makes the Elites and the Overclass react the way they do - or what they may have in store next for the protestors, say if the cold and snow of winter don't drive them all back home....to live with their parents and wait quietly for jobs to materialize.

The truth is that even now as I write this, sophisticated crowd control methods are being rushed into development, such as have been reported in sources like The Economist (Oct. 15, p. 89, 'Electromagnetic Weapons: Frying Tonight') in order to counter what the Neoliberal Globalists and their overclass allies believe is a threat stirring to their power. They have seen the chaotic and upending mass displays of anger in places such as Egypt, Yemen and Libya and want no part of it breaking out widely on their Neoliberal estates.

Thus, given the green light, defense departments everywhere in the NATO countries are working overtime to develop devices to disperse crowds on a moment's notice, funded by massive defense and/or security bankrolls. As The Economist notes (ibid.):

During the 1960s this craze or yen grew, based on the theory that such high RF energy - say as an offshoot to a nuclear explosion - could be used to burn out an enemy's grid, telephone network and even the wiring of his motor vehicles. These occurred by inducing a sudden burst of EM energy in the vehicles, etc.

Since then, the technology of RF weaponry has improved to the point of being much more localized so the HRF impulses can actually also be directed to specific locations. The most widely circulated use, as first mandated by the Reaganite elites of the 1980s, was to use in crowd management, and especially...to halt any riots in their tracks which might erupt, say such as the Watts riots in 1967 and the nation wide riots that occurred in the wake of Rev. Martin Luther King's assassination.

Now, the elites have a wide spectrum of varied weapons to use as the need arises, including - if it comes to that- on any protestors of the OWS movement deemed out of control. The simplest one, and perhaps least destructive physically, emits RF radiation that directly affects the human digestive system and nervous system to trigger violent vomiting. It is estimated that one brief "spray" by such an RF device could have 99% of a violently agitating crowd reduced to paroxysms of non-stop vomiting within seconds. Unable to raise a whisper, far less a shout, the theory proposes that merely one burst is enough to send most protestors running back home....and away from the zones now occupied. Mayors like Bloomberg and others would be able to smile again,....satisfied that corporate space has again taken over public civic space.

At another level, The Economist reports (p. 90) that a more intense "Active Denial System" - "developed by the Joint Non-Lethal Weapons Directorate in collaboration with Raytheon" can be up to the task of dispersing hard to manage or control crowds. As The Economist notes:

"It works by heating the moisture in a person's skin to the point where it feels like....opening a hot oven. People's reaction when hit by the beam is usually to flee. The beam's range is several hundred meters".


Since one meter is about 3.3 feet this means a single beam could cover just about all of Zucotti Park. (Tests on monkeys performed by Raytheon suggest it causes no permanent damage and hence unlikely to cause such for humans. Although the scorched skin feeling will be like one of the worst sunburns ever experienced).

Why are the Elites so very worried, and to the point they'd resort to such devices to undermine free speech rights? There are a number of aspects here to be addressed.

1) The Overclass Globalists No Longer Believe in "Civic Space"

For the past thirty -odd years, indeed, a much-hidden effort has been undertaken to drive civic space from the public field of vision. To ensure such a degree of corporate-private takeover of lands, parks, museums, libraries..etc...that people come to believe the absence of civic space - say for speaking publicly or demonstrating - is more real than its presence. In such a mindscape, the protestors of OWS can be depicted as "squatters" as opposed to citizens exercising their rights in the public square. But,.....since Zucotti Park is privately owned, it is argued by the elites that it is not a "public square".

Let us agree that ‘civic space’ occupies the mid -ground between government and the rapacious private, corporate sector. In terms of set theoretics, imagine circles for ‘government’ and ‘private sector’ respectively – with a large intersection of commonality between them.

Civic space or the ‘set of civic society’ lies apart from the influence of the other two. It is neither where we vote (more and more influenced by ad-ism and PR, soundbites) or where we buy and sell. It is rather where neighbors, say in New England, converge for public meetings to decide on the location of a homeless shelter, or neighbors pool resources to care for children of low-income workers, without any government ‘benediction’ or expectation of commercial sector ‘return on investment’.

The tragedy of the 20th (and now 21st ) century is the tragedy of the civic commons. The gradual erosion of civil society is largely fueled by the removal of civic space and hence the reality that citizen interests are eclipsed by corporate and market interests, either in pursuit of state (or corporate) power, profits or both. Thus, political influence is purchased via the power of the purse, for example in lobbying, or to use the words of the lobbyist quoted last night on '60 Minutes' - "We Own them" - meaning our beloved politicos. These vermin then write the laws subsequently enacted to favor their special interests, whether bloated defense contracts, or absurd prescription drug bills that are really corporate welfare.

Again, this isn't occurring just in the U.S. (though it has been most rapid here) but all over the world, as the Globalists clear out public space to make room for their corporate power enclaves.

In this context, the use of "non-lethal" force is deemed justifiable to preserve the dominance of corporate space over civic space, and thereby pave the way for citizens to emerge as corporate serfs and pawns. When the unemployment rate reaches 50% - totally conceivable if the Repukes take over the House, Senate and Executive branch next year- then the stage will be set for serfdom since people will be willing to accept chattelhood in return for food, lodging. This is what the corporate-owned repups aren't telling the hoi polloi who will vote for them!

If people are able to obtain the superb monograph entitled, The Breaking of the American Social Contract, by Frances Fox Piven and Richard A. Cloward, The New Press, 1997, they will see that the Overclass has made an investment in tracking protests over the decades. In particular, they have enlisted so called "resource mobilization (RM) analysts" to plumb the divergences between conventional social life and the existence of collective protest (op. cit., 'Normalizing Collective Protest', p. 345).

In these analyses, a key objective is for the RM teams to show the criteria that distinguish "rule-conforming" and "rule-violating" action or protests. In the first case, one describes the activity as "normative" and in the second "Non-normative". It is the latter which the elites fear the most because they believe it is most difficult to control.

In the former case, indeed, the first methods of control usually entail the dissemination of negative PR in the media. The collaborators are tarred, their actions impugned and if they are "normative" they will retreat. OWS, on the other hand, has already been subjected to 6-7 weeks of tarring by the media using every conceivable known expedient...including that they "have no clear or specific message" to "they are mostly anti-Semites" to "they are mainly violent rabble rousers".

None of these have worked, so the fear of the Overclass has now been ratcheted up, even more than might have been predicted, after the fracturing of an Iraqi war vet's skull in one Oakland protest. The last thing the Elites want at this stage is for any former military, vets or others, to become caught up in the protests. The reason is that if they do, then it muddies the targets, and they can no longer reduce the protestors to disaffected, unwashed, toke -puffing hippies.

RM analysts are also averse to the lack of organized protests. They expect and need a hierarchy, such as one beheld in the 1960s civil rights protests. There then exists a defined leader and spokesperson (i.e. it was then Rev. Martin Luther King) and also subordinate "lieutenants", e.g. Ralph Abernathy and others, who carried out his orders. OWS evinces none of that, so has the elites frantic with worry over who is really running things. If no one is, then there's no localized center for attack to take the wind out of their sails.

The authors of the book noted above rightfully take the RM analysts to task for "overstating the structural requisites of protest". (p. 355). Indeed, one need not displace himself in a march for it to be a protest, since the very occupation of a park, or what is decreed to be putatively civic space can also be. Indeed, it demonstrates by the presence of hundreds of occupying bodies that these citizens declare this extent of territory open to PUBLIC discourse and even active protest.

Perhaps the single most potent claim of the authors (p. 362) is that:

The authors decree (ibid.)that these are means by which to assure "opportunities generated by the fragmenting of elites and by a re-aligning process".

The question remaining is whether the assorted groups comprising Occupy Wall Street are in fact "lower stratum groups". But I would say that in an economic class war being fought by a powerful cabal of Neoliberal banking, investment and political elites we are ALL lower stratum. Indeed, the quotes extracted and found in the book by Steven Solomon ( 'The Confidence Game: How Unelected Central Bankers Are Governing the Changed World Economy') confirms the total disrespect and derision with which all these elites hold the mass of humanity who actually must work for a living....or not, being unemployed and at the mercy of their appointed debt collectors.

As far as OWS carrying out more concerted action, they'd be well advised here to know that if they do, to make sure they bring ample barf bags with them when those high RF vomit weapons go off, and also protect their skin when the micro-wave beams are activated!
Posted by Copernicus at 1:49 PM