Stephen King- Really Prepared to Get His Ass Kicked by CTs? 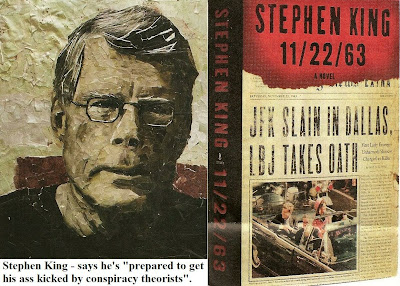 In a most unusual and audacious interview this morning on MSNBC's 'Morning Joe', author Stephen King (in respect of his latest novel '11/22/63' on a time traveler attempting to stop the JFK assassination) asserted that:

"I am prepared to get my ass kicked by conspiracy theorists on my book tour!"

Well, you better be, Mr. King, though I somehow doubt with all the groupies in tow at Barnes & Noble or other mainline bookstores, you will meet those particular JFK conspiracy researchers- the ones with the depth of knowledge to challenge your insipid premise that Oswald did it!

Now, I already covered a number of aspects on why Oswald could not have killed Kennedy, in this earlier blog:

Now, I wish to focus on the remarks Mr. King made this morning and show exactly why none of them hold logical ballast. I will also continue to show that Mr. King's book research was extraordinarily weak, particularly on the JFK case. While one doesn't necessarily demand a novelist be able to research to the level of a Ph.D. thesis, one does expect enough investment of effort to disclose he's adequately covered the details which ultimately forge the premise of his work.

Let me start with King's first statement, to the effect that choosing the "Oswald did it" theme was "easiest", adding "You know, Ockham's Razor and all".

Okay, hold it right there! Ockham's Razor, first of all, is not a scientific law or even operating principle. It is a very useful tool, often used in parsing competing hypotheses. It basically stipulates that given two or more hypotheses to account for the same phenomenon, the one which makes the fewest assumptions is most likely the correct one.

However, the one proviso here, in invoking Ockham, is that one is applying it to a hypothesis concerning a natural event, or phenomenon! The reason is simple: we expect all natural events or phenomena to conform to a limited number of defined natural laws, including: the 2nd law of thermodynamics (entropy law), Newton's laws of motion, and the conservation of mass -energy.

The problem inherent in applying it to the Kennedy assassination is that this event is not an exclusive natural act or phenomenon. Indeed, the plausible presence of human emotions, motivations and agendas automatically places it in the realm of an unnatural event so that Ockham's Razor cannot apply.

In effect, we are making a deliberate separation between the causes and effects which govern the natural world, say like solar eclipses, and asteroid flybys, and those which govern human affairs.

For one thing, humans are enmeshed in complexes of emotions and ideological agendas that can't be quantified like Newton's laws of motion, or simplistically reduced to one cause-one effect relationships. In addition, humans - unlike natural laws- are capable of deceit and misdirection. So, from many points of view, it would be foolhardy to reduce the realm of human behavior - including putative conspiracy - to the model applicable to simple natural laws. It would require something basically approaching a general denial that humans would or could ever act with duplicity. Which is total nonsense. I mean, King ought to be ashamed for even suggesting such a thing - or that Ockham's Razor could legitimately be generalized and used as if the Kenendy assassination were liek a solar eclipse or a planetary occultation of a star.

This is as derelict and insane as the social Darwinists, based on Herbert Spencer's gross over-extension of Darwinian natural selection, who believe that "survival of the fittest" can be applied to human societies!

It also discloses a disturbing absence of critical thought.

When King did refer in his interview to assorted "conspiracy theories" (which he claims to have investigated), they were all of the weakest variety: the Mafia -Sam Giancana Mob theory - i.e. the Mob whacked him because he set his brother Bobby - as Attorney General - loose on the mob with his hearings, when Giancana & Co. allegedly allowed JFK to win Chicago and hence Illinois electoral votes in 1960; or "the Cubans did it" conspiracy, i.e. a cabal of disaffected Cubans nailed him for not providing air cover during the Bay of Pigs and so allowing them to be captured by Castro's revolutionaries and imprisoned. And lastly, the 'Fidel did it" theory - that Castro engineered the assassination to get back at Kennedy for allowing the assorted CIA atempts on his life, including the attempted use of poiaon cigars, all via "Operation ZR-Rifle".

The last is totally insipid and easily shot down. National Security Archive records show that starting in late 1962, JFK had begun a rapprochement with Fidel Castro, and a slow, deliberate effort to normalize all relations with Cuba. Indeed, as late as September 24, 1963, Robert Kennedy had informed Deputy U.S. Ambassador to the U.N. William Atwood, that JFK might be able to meet Castro to finalize the deals, but not in Cuba, suggesting Mexico as an alternative and a planned Mexico trip to enable a covert meeting. ( 'Kennedy and Castro: What Might Have Been', by Peter Kornbluh, in The Baltimore Sun, Aug. 22, 1999, p. 1C).

National Security Archivist Kornbluh shows (by reference to documents he has accessed), it was William Attwood, a Washington lawyer, who had negotiated the original release of the Bay of Pigs prisoners. Attwood was then charged with becoming the first American emissary to secure Castro’s ear and trust in a year-long rapprochement. In particular, to show good will and good faith, Attwood arranged for $62 million in medicines and food aid as part of the prisoner deal.

Almost no superficial investigators of the background to the JFK assassination know or are remotely aware of any of this, but it definitely means with a rapprochement ongoing and actual aid and supplies delivered to show good faith, Castro would not have attempted any hit of JFK. Indeed, JFK had terminated ZR-Rifle long before that, and all indicators show that rogue elements in the CIA pursued it strictly on their own time.

It is also more than plausible these elements would have known of JFK's efforts and not taken them very lightly. Indeed, they'd have seen him as a traitor of sorts.

As far as the mob and 'Cubans did it' variations, they also suffer from one major glaring defect: NEITHER of them had the power to effect alterations in the actual physical evidence, including:
- Kennedy’s brain (missing from the time the body arrived at Bethesda for autopsy)

- All of Kennedy’s clothing (ordered destroyed)

- The blood- spattered and bullet- impacted limousine (ordered dispatched to Ohio, where it was disassembled, then completely rebuilt)

- Zapruder film (seized and altered with attempted juxtaposition of frames)

None of these could be done by the Mafia or sorehead Cubans or even rogue CIA agents. The orders had to come from the top, since the evidence was all material, and in addition under control (at various times) of federal agencies, including: FBI, and Secret Service. In fact, the relevant records disclose that none other than Cliff Carter (one of the co-conspirators found guilty by a 1984 grand jury in the Texas Henry Harvey Marshall slaying) gave orders for the actions which, if refused, were followed up by Johnson himself making telephone demands.[1]. Let's also point out that Johnson violated federal and state law with this type of usurpation, destruction of material evidence, not to mention having Kennedy’s body seized and taken to Bethesda (where military officers oversaw the autopsy procedures) instead of allowing the autopsy to be performed at the same Parkland Hospital in Dallas. (Where some of the most experienced bullet wound autopsists resided).

Again, if indeed the Mob and former Bay of Pigs Cubans were involved, it was only as "mechanics" or actual shooters, not as the architects or masterminds!


King then runs off the rails, displaying even more lack of attention to historical details, by asserting to Joe Scarbororough that:

He made this remark in connection to Oswald being hired at the Texas School Book Depository on Oct. 16, 1963, or a mere six days before the assassination. As if this serendipity in hiring to be at the alleged firing scene was a lotto win for Lee. This is total bullshit. (And also, as I showed in the earlier blog link - above- the kill shot could not have come from the Book Depository, since Jackie was visibly leaning over the limo trunk after a fragment of Kennedy's skull, so the shot had to have come from the front. See Zapruder image 314 in the blog cited)

King then makes reference to Ruth Paine, who testified that Lee left his keys, and other possessions as he left for work on the fateful day. All of which are lies. Paine herself was a deceitful, untrustworthy witness who never truthfully acknowledged, either before the Warren Commission or a later New Orleans Grand Jury, that her sister (Sylvia Hyde Hoke) in fact worked for the CIA - while her husband's (Michael's) mother, Ruth Forbes Paine Young, was connected to Allen Dulles (the former CIA Chief) who JFK fired after the Bay of Pigs. (James Douglass, 2008, JFK and the Unspeakable, Orbis Books, p. 169)

Let us also recall that Dulles was appointed by LBJ as one of the Warren Commissioners.

Ruth Paine, who King seems to hold up as some kind of unquestioned paragon or model, also never acknowledged in any of her testimony that she withheld from Lee the news of a better paying job offer made on Oct. 15. This came by way of phone call to the Paine Residence from Robert Adams of the Texas Employment Commission. According to the documented materials presented by author James Douglass (op. cit., p. 171):

"Adams spoke with someone at the Paines' number about his being prepared to give Oswald referral for permanent employment as a baggage handler at Trans Texas Airways for a salary $100 a month higher than that offered by the Book Depository's temporary job".

Adams then left a message with whoever took his call for Oswald to contact him about the job, but this was never done. Adams tried to phone for Oswald the next day, and was told he "wasn't here". Why? Why wasn't the better paying job information passed on to Oswald? Given Paine's background, and her connections to CIA people like her sister and Allen Dulles, the obvious reason is to put the patsy in place. Had Ruth Paine (who professed to care so much about the Oswalds) done her Christian duty and given the info to Lee to enable him to take the better paying job, there was no way the architects' plan could have succeeded. They could never have been assured that the one they were preparing for patsyhood would be at the place needed to take the fall.

Finally, in a 1993 NBC interview with Tom Brokaw (still have it on tape), Marina Porter Oswald herself aggressively denied all the bullshit stories about what a great help Paine was. She also added, with great emphasis, that Lee loved Kennedy as a fellow family man and would never remotely consider doing such a foul deed.

Evidently none of that matters to a guy who is now perhaps the master hack in terms of fictional novels to do with 11/22/63!
Posted by Copernicus at 9:52 AM