Will There Be 'Blood' in the Water? 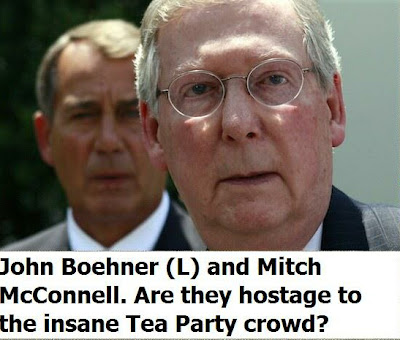 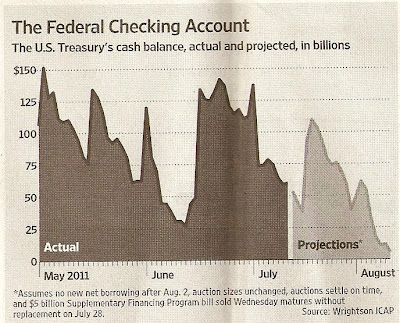 Back in December, Alan Bowles, chair of the Obama Debt Commission, warned that when it came time to raise the debt ceiling there would be "blood in the water". Did he foresee something that the rest of us could not? Or, was he more able to parse the mood of the abhorrent "Tea Party" misfits who continue to derail any sane options for a debt ceiling raise?

Let's make this abundantly clear from the outset: there should be NO fanfare or hoopla regarding this debt ceiling increase! It has been pro forma for 75 years now, done as a matter of course or general house keeping. It was done 13 times during Reagan's presidency (which converted this nation from foremost global creditor into a debtor - thanks to his tax cuts and deficit spending) and seven times under Bush II's, aka Shrubya's (which added $5.7 trillion in deficits via "wars" of choice and tax cuts) and none of those saw the fanning of incidents and threats to renege! The only reason it has assumed massive and catastrophic proportions now, is because the insane Teepee's have insisted the debt ceiling increase be tied to slashing domestic spending - when they themselves adamantly refuse to stop extending deficit-pumping tax cuts, or cut defense spending!

This has led to what one left blogger on smirkingchimp.com aptly described as: "A brutish Nazi having taken a hostage and placed a Nazi-style 16" dagger to his neck".


But, as the Wall Street Journal editorial put it yesterday ('Debt Limit Hari Kari', p. A16):

The Tea Party -talk radio expectations for what Republicans can accomplish over the debt-limit showdown have always been unrealistic. As former Senator Phil Gramm once told us, never take a hostage you're not prepared to shoot. Republicans aren't prepared to stop a debt limit increase because the political costs are unbearable. Republicans might have played this game better but the truth is Mr. Obama has more cards in play.

Well, maybe. If this is so then we can see his willingness to use "chained CPI" Colas to reduce social security costs, and extend the Medicare qualifying age to 67 as bluffs in a game of poker. The problem here is the other guy may call you on your hand, or bluff! Fortunately, Boehner and Co. didn't and punked out, unwilling to go to raise their hand to Obama's $4 trillion stakes - which would have included taxes - since no way could $4 trillion in cuts simply been implemented without catastrophic consequences to the demand side ...meaning a plausible Great Depression II.

The Tea Party Reep-tards ought to also read the WSJ editorial (and note, the WSJ has never been a lefty paper)and see it has emphatically insisted Mitch McConnell isn't "selling out" Republicans with his new plan, which I happen now to think may be the only way out of this impasse. It essentially allows Mr. Obama to raise the debt ceiling without House votes. I don't think this is anything mystical or extraordinary, heck it's basically implicit in Sec. 4 of Amendment XIV!

But McConnell caught holy hell for his proposal amongst the peanut gallery of Repug city, mainly Teepees committed to holding that dagger to the collective throat of the country. This lot are definitely off the tracks and insistent on getting their ideological orgasms at the expense of everyone else.

In a key and rare moment of candor, McConnell- interviewed on the Laura Ingraham radio show yesterday- said it's in the Republicans' best interests to let the debt ceiling be raised, because otherwise Obama will paint them as equally guilty (for their intransigence on taxes- when Obama was actually willing to make cuts to S.S. and Medicare) and there will be political hell to pay. Indeed, he said if the Reeps allow a default, the payback from voters will be their worst nightmare: a second term for Obama.

He most certainly IS correct! If the Teepee Nation, delirious from their alleged "political capital" from last November, insists on this self-destructive and reckless course, they will most definitely pay through the eyes, ears, nose and throat. For once, Mitch McConnell was acting like a grownup and the TeePees, brats that they are, didn't want to take their medicine. But their censuring of McConnell shows just how deranged they are. This is something of which Mr. Obama must take note, in attempting to make further headway with his debt talks. (Ever thought of taking a two by four into the room with you, Sir?)

Albert Einstein once said that insanity is doing the same thing over and over and expecting a different result. Obama has already gone nearly two thirds of the way, maybe more, to proving this. Unless some definitive progress is made very soon, he risks losing dignity, face and presidential gravitas in efforts to appease a claque of insane people, elected by more insane people. (Btw, Obama was correct yesterday in asserting most presidents wouldn't stand for this back and forth petty nonsense. LBJ, for example, would have begun to pull federal funding for all the districts whose congress critters were instigating the impasse! LBJ didn't take prisoners!)

The key thing here is that if indeed the 'tail' is wagging the dog, and Boehner and McConnell are captives of the TeePees and the moron Eric Kantor, then there is little real progress that can be made.

The only way to escape the "dagger" is for Obama to follow McConnell's plan (never mind it will confer ownership of raising the debt ceiling on Obama - the Rs would try to do that anyway) OR to invoke Sec. 4 of Amendment XIV on his own. There is no other way, and he simply cannot give any more away in the form of spending cuts. He must also notify these knuckleheads that their mere appearance at meetings does not equal to his concessions on spending cuts.

So what if the worse comes to the worse, and Obama doesn't exercise his Amendment XIV option? Then, will blood be in the water, to use Alan Simpson's parlance? Maybe.

First, if the debt isn't raised the government will only have the money available from taxpayers, and this is estimated at maybe $12 billion (mostly from Johnny come latelies. See also the accompanying federal funds chart.) However, $29 billion in Social Security and disability checks are due to be sent out to 25 million folks, as well as veterans' pay, benefits, disability checks.

Can Obama decide to only send out half of these checks (as some observers have predicted), and use the other half to pay the U.S. treasury bond holders, on Aug. 4th when $100 billion is due them? Maybe, but the main credit rating agencies (Moody's and Standard & Poor's) have already warned that even opting to refuse to send out ONE Social Security check will cause them to downgrade the country's bond rating from its current AAa level.

If that happens, money will be much harder to come by - say to borrow (especially as the government borrows 40 cents for every buck it needs to spend, a sure indicator we need more revenue). Worse, the capital markets will begin to go bonkers if they haven't already by an Aug. 2nd default. Recall here that in October, 2008, the DOW Jones Industrial Average tanked by 778 points when the House voted down the Troubled Asset relief Program.

I predict this time it will be much much worse, and the DOW will tank by more than 2,500 point in one day - a full market crash. Most seniors and others exposed to the stock market via their 401ks will lose up to 40-50% of their value and have to start back on the road to recover those losses again. They may end up working until they croak.

Meanwhile, interest rates will soar even as the credit markets seize up. Kid looking for a college loan? Forget it! Small businesses needing loans? Dream on! Not going to happen! The credit freeze will be as bad or worse than 3 yrs. ago.

Ultimately, if not resolved within days, then benefits checks may well have to be stopped. Certainly if the ceiling isn't raised by the end of that week (say Aug. 11) this is a distinct possibility. Veterans' disability and pensions checks will also stop. We are talking about the full faith and credit of the government here, and bond holders must be paid off first. The very fact TeePee idiots and their champions (e.g. Jim DeMint of SC) are blase about all this, shows how very little they really know about the workings of modern globalized, capital markets. So ...we have the travesty of a whole political party hostage to a bunch of ignorant, economically illiterate stooges!

Let's hope it doesn't come to this, but that means that cooler and rational heads prevail amongst the repuke faithful...the tail wagging the House leaders and Mitch McConnell (though McConnell has tried to escape it)
Posted by Copernicus at 10:04 AM