Jason Lisle an astrophysicist? Don't Make Me Freaking Laugh! (I) 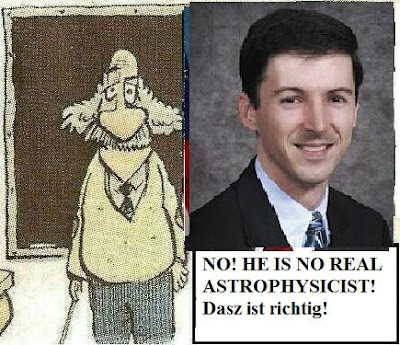 Jason Lisle’s groveling, drooling groupies (mainly religious morons) continue to idolize him merely because he somehow got an “astrophysics” Ph.D. but ignore his major astrophysics errors in his research so we will look at them once again, in this and the next blog.

Let’s first be clear here that some of the worst howlers in physics and astrophysics history have been at the hands of Ph.Ds. For example, John Gribbin devised the “Jupiter Effect” theory later shown to be total pseudo-science (since the alleged Effect was shown to not even be able to produce a tidal distortion of 1mm on the Sun, and the alignment was actually a wide arc. ) Thus he had to retract it. Meanwhile, J.R. Kan, C. Lee and S.I. Akasofu devised a theory of solar flares that’s totally unphysical, based on "V" and other structures that are without any empirical support.

Worse, Their dynamo flare model, for example, requires that the dynamo action send currents to specific regions to provide a Lorentz force: (J ⊥ X B). This implies a current system which is non-force free in contradiction to numerous existing observations, and the fact that at the level of the photosphere –chromosphere, the plasma beta = rho v^2 u/ B^2 << 1.

In Lisle's case he's automatically disqualified from being any "real astrophysicist" by the fact he adheres to gibberish that NO REAL astrophysicist would hold! For example, Lisle in one dvd on “The Young Sun” attempts to convince gullible viewers that he can show the Sun is “young” so fits in with the Genesis fairy tale that the Sun can be no more than 6,000 years old (since in Genesis the Earth was made before the Sun, an impossibility anyway as I’ve shown in a number of blogs).

A key quantity in obtaining these time scales is the energy liberated per (nuclear fusion) chain defined as: W(rho) = rE, or W = (rE)/rho which is in ergs/gram for example. (I.e. the total ergs of stellar energy given off per gram of stellar matter available for reaction.)

E is found from specific nuclear fusion reactions, such as p + p -> D2 +e(+) +v, where two protons fuse to yield deuterium, a positron and a neutrino(v). The key quantity is r, defined as the reactions/cm^3. Obviously, the greater this value the shorter the energy generation time scale and the smaller the value the longer it will take. It is defined (see, e.g. Astrophysical Concepts, p. 331, by Martin Harwitt:

Then working out 'r' for the proton-proton fusion cycle one can (after a lot of work) obtain the time scales for each chain part and the energy yielded for each, viz. (cf. Harwit, op. cit., p. 336):

The only mildly problematical time frame in the p-p cycle is for the initial fusion, which yields 14 billion years or about three times the age of the current Sun. Thus, at face value, this translates into only about one fusion every 14 billion years for the first branch of the proton-proton reaction. While that is extremely long, the Sun fortunately has a vast number of protons available in its core, so that – at a temperature of 10 million Celsius, enough can fuse to initiate helium production and energy given off. Moreover, the key "catalyst" speeding the reaction time up is the phenomenon of "quantum tunnelling" whereby a lower energy particle can surmount a higher energy barrier (what we call the "Coulomb barrier") by virtue of its wave-like properties.

To fix ideas, let us say a particle (say proton) of kinetic energy K, must overcome a barrier of energy V ("barrier potential"), via the process of "tunnelling". Consider a deBroglie wave (p = hL or L = (mv)/h where L is the de Broglie wavelength) arising from (p+) of form: U(x) ~ sin(kx) where x is the linear dimension along displacement and k, the wave number vector (k= 2π/L).

Now, though the associated energy K < V (the barrier "height"), the wavefunction is non-zero within the barrier, e.g.


So, visualizing axes for this:

with the "barrier" at height V, we visualize the particle(*) on the left side "tunneling" over to the right side where it may have wave function, U(x) ~sin (kx + φ), where φ denotes a phase angle.

Note that if the barrier is not too much higher than the incident energy, and if the mass is small, then tunnelling is significant.

Note also that the penetration of the barrier is a direct result of the wave nature of matter! In effect, this wave nature - which is uniquely quantum mechanical in origin- allows a higher energy barrier to be penetrated by a lower energy particle, something totally without parallel in classical, Newtonian physics

In other words, without the benefit of quantum tunnelling, the first reaction time in the p-p cycle would be inordinately long and have to be disallowed as unphysical.

Beyond this we know the photon diffusion time (the time to make it from the edge of the solar core to the Sun's surface or photosphere) is calculated to be nearly 1 million years. This takes into account all the changed random directions the released photons undergo as a result of absorption and re-emission by particles along the way out. No core photon makes it directly through, but instead undergoes millions of interactions en route resulting in collisions. Again, 1 million years for a photon's diffusion time belies Lisle's young Sun argument!

But here's the real conundrum for Lisle's assorted worshippers to ponder: Lisle himself contradicts his 'Young Sun' assertion in his Ph.D.! (Introduction). Therein he concedes to the above dynamics for nuclear fusion occurring on the Sun! So one is forced to ask if he really believes that or if he LIED in his dissertation? If he lied then his Ph.D. isn’t worth much I don’t care which institution awarded it.

Real astrophysicist, my ass! This guy isn't fit to be a real shoe salesman! Who I have ten times more respect for because at least they're honest and earn their livings honestly as opposed to telling lies that gullible idiots want to hear, and using their "Ph.D."s to confer an unearned gravitas by which to earn a living from creationist superstition shops, like AiG where he's alleged to be a "research scientist" How about a magical thinking monarch?

More on Lisle's specious Ph.D. findings next time!
Posted by Copernicus at 11:05 AM

It's interesting to know that Lisle does not accept the premise of his own thesis. It'd be unexpected if he actually does accept it and is merely pandering to creationist to garner a job as he is unable to find any research positions due to the lack of publishing or integrity in his work.
Thanks for the read.