Time to take the Constitution Back from Wingnuts & Teabaggers! 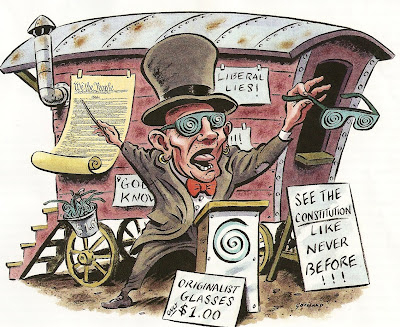 On this Fourth of July it does us well to recall what the Constitution is and isn’t. It isn’t a sterile document frozen in time or a “bible”. It IS a living and breathing document that inheres, lives and thrives in the hearts and minds of the people. In other words, it is written to inform and serve the people – the citizens of this country – not for the citizens to serve it, or idolize is as the Teepees do.

Thus, we hear much talk from conservatives about the “original intent” of the Founders in writing the Constitution but very little evidence that these purists actually know what any single part means. The Whacko Right, based mainly in the Federalist society and other bastions, insists the Constitution was designed to limit government – the reach thereof- and also any innovative government programs which they deem have no basis in the original parchment.

But dare to ask them about the “unenumerated rights of citizens" declared under the Ninth Amendment of the Bill of Rights (referred to as those rights 'not denied or disparaged' by the enumerated rights) and their faces all turn as blank as their minds. No wonder! The whole concept of rights that can exist without being actually mentioned is something beyond their ken, or conception! Evidently, then, they never read the Constitution as carefully as they believed! In fact, as Prof. Garry Wills has pointed out, the unenumerated rights are all those rights not already specifically declared or described in the existing document. The Founders thereby realized and understood there could exist rights in the future they hadn’t conceived of at the time of the Constitutional Convention, and so allowed those (then) undefined rights to become realized later. In other words, the rights allotted citizens are not limited to the rights actually and specifically delineated, i.e. in the Bill of Rights.

Many Federalists actually believe the unenumerated Rights refer to “State’s Rights” but this is false. The States have NO rights, only flesh and blood citizens can possess Rights, as the selfsame authors (e.g. James Madison, Alexander Hamilton etc.) noted in The Federalist Papers - which one would have thought the Federalist Society would be acquainted with. Indeed, in Amendment X, the reference is specifically made to powers not delegated to the United States by the Constitution - nor prohibited by it to the States- are reserved to the States respectively...). Thus, the States have prerogatives and powers, but citizens have rights. This is a critical distinction that most tea baggers lack clue one about.

Another Teepee myth is the Constitution was created to protect states from federal power, but this is bollocks. The fact is, in the Federalist Papers James Madison himself compared the federal government system to the Solar system. Just as the planets (analogous to states) could not exist as part of that system without the centralized force of gravitational pull of the Sun, so also the federal system could not exist without the centralized pull of the federal government – leading the diversity of states to be one cohesive entity as government. Thus we do find the Constitution includes limits but mostly limits on STATE governments.

If the Constitution was intended to limit the federal government power it certainly doesn’t say so. In Article I, Section 8 – the longest segment of the document, we see an extended declaration of congressional power. (The States are mainly afforded their power in the articles of confederation). In addition, it ends by clearly delegating to Congress the ability “to make all laws which shall be necessary and proper for carrying into execution the foregoing powers and all other powers vested by this Constitution in the Government of the United States, or any Department thereof”..

(Aside: Of course, some readers may be wondering where I stand in respect to all the preceding, given the federal laws against “controlled substances” which collide with the States' own laws allowing medical marijuana, based on my earlier blog. But this is a different issue: the one of making BAD legislation! Yes, it shows Congress – albeit having the power to make laws – will not always pass judicious or correct ones. Some inane (or insane, or immoral) laws will be passed over time, and that is why from time to time citizens must inveigh against them and seek their being overturned or challenged. Slave holding laws – like the ‘Fugitive Slave Act’ – were also enacted at one time, but sane and moral citizens saw that they were ultimately expurgated as unfitting a nation that truly prized liberty. The same I maintain, holds for these overbearing and loathsome laws against a medicinal plant ok'd by state legislation.)

Another canard promoted by Tea Party idiots (based upon assorted signs at their rallies), is that proclaiming "No taxation!" In fact, the REAL issue at the Boston Tea Party was: No taxation without representation!. Nowhere in the Constitution does it say 'No taxes', period! Again, Sec. 8 of Article I clearly states:

This can also be seen as linking the payment of debt obligations (such as the $14.3 trillion we have now and which are embodied in raising the debt ceiling) to preserving the general welfare - which is, in fact, the main item of federal budgets that the Repukes and conservatives, tea baggers want to gut..cut..in the form of what they disparagingly refer to as "entitlements": Medicare for Seniors, as well as Social Security, including for the disabled and elderly. In other words, the clear undertone here is that TAXES be used when needed to pay debts!

IN tandem with this, and related, is the provision under Amendment XIV, Section 4, which stipulates:

"The validity of the Public Debt of the United States, authorized by law, includes debts incurred for payment of pensions ....and shall not be questioned."

In linking the latter two together, it is clear to me that if the Republican Congress refuses to act to raise the debt ceiling (and thereby honor the validity of paying the Public Debt) then President Obama can and MUST exercise an Executive Order to override a putatively derelict Congress and invoke Article 4 of Amendment XIV to raise the debt ceiling. The alternative, of not doing so, would also violate Article XIV and be lawless while also violating Sec. 4 of Article I. For example, payment of "pensions" (interpreted as Social Security monies) would likely not be made in case of a default. Therefore, debts for such payments cannot be avoided by law and the president must seize the initiative if a derelict congress abdicated its responsibility!

Yes, the game-playing reptile congress (trying to use the debt ceiling as leverage to hold the whole nation hostage) may squawk and perhaps even initiate a Constitutional crisis, but they have no ballast, no precedent to base it on. Obama can simply argue (or more likely his Solicitor General) that the Republican House has demonstrated fiscal irresponsibility and recklessness in jeapordizing the full faith and credit of the U.S. by gamesmanship, which is what it is. He can refer to the fact that Congress has already enacted 75 measures to raise the debt, including 17 under Ronald Reagan.

In terms of Obama's Affordable Care Act, wingnuts and Tea baggers have argued that the decision to buy health insurance must be a private one, and hence one can opt out or not. The government can't dictate such a purchase, even if it would bring down premiums for all. Thus, a young and healthy worker may simply decide the costs are not for her so she decides not to buy.

But what if she then gets into a major auto or motorcycle accident and requires serious surgery? Without health insurance this means landing in an ER where the costs are much greater. Most of these costs are passed on to the regular insurance holders for whom it can be regarded as a kind of extra tax on them in higher premiums. Multiplied millions of times this would represent a significant additional (and unintended) tax upon all the regular insurance buyers! In other words, it would be totally unacceptable.

Thus, in the case above, the private decision to opt out has major impacts on the overall plan and purchases - so can't be tolerated. In other words, doing nothing - buying nothing, can be a private decision with huge deleterious public consequences!

Now, is the Affordable Care Act somewhat cynical? Yes, I agree, and according to one University of Pennsylvania Law Review article:

While my preference, if I were in charge, would be to raise new taxes, then let people opt out if they chose (after paying their taxes!)

But again, being cynical or a law embodying it, is not proscribed by the Constitution.

The most crucial aspect to grasp about our Constitution on this July 4th, is that it was written as a flexible set of rules which could be amended (as it has been) and not a dead hand authority restricting options, choices or novel inputs to adjust to the changing times. As I said, it is not a bible, nor should the Founders' words be treated as some kind of inerrant text (look at the provisions for black-slave citizens, to regard them as only 3/5 of white!).

Our aim then needs to be to rescue the concept of a living Constitution from being a whipping boy of the Wingnuts and tea bagger extremists. A Constitution by itself, after all, guarantees nothing. (Bolshevik Russia and Nazi Germany had constitutions). In effect, if there is no genuine spirit of liberty in the hearts and minds of citizens, then their nation's Constitution can be no more than just a "piece of paper" - as George W. Bush once memorably put it, when he enlisted a derelict judiciary to justify his (1978) FISA (Foreign Intelligence Surveillance Act) excesses.