Is It Time to Put a Choke-hold on Christian Fundamentalism? 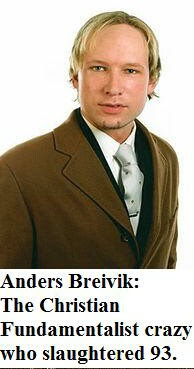 With the news that a dedicated Christian Fundamentalist was inspired to slaughter 93 innocents, one is forced to ask who, or what (e.g. which BOOK, or blogs) incited him and what must be done now to control all screwball fundamentalist fanatics everywhere, whether Islamic OR Christian? In other words, what forms of control or as I call them "cultural choke holds" can we employ to try to keep these nuts at bay? Is it even possible?

So what do we know so far about this Norwegian Christian Fundie screwball, Anders Breivik? The police and his lawyer said today he claims to have "acted alone" in a planned attack eerily presaged in a detailed manifesto calling for a Christian war to "defend Europe against the threat of Muslim domination". Thus, we see immediately that he evinces the same "hate all Muslims" shtick that so many Right wingers display in this country, as evident from their blogs and praising any who attack or criticize the rights of Muslims (such as Reep candidate Herman Cain recently did)

Oslo Police identified the suspect as a 32-year old, right-wing fundamentalist Christian, whose acquaintances described him as a "gun-loving Norwegian obsessed with what he saw as the threats of multiculturalism and Muslim immigration". This sort of reactionary undercurrent, is also present in other European nations including the UK (via the National Front), and France as well as Italy and Germany. In each nation, a savage right wing political element has arisen in response to fears that the established governments have permitted excessive immigration, especially from the Muslim world. This has provoked fear and rage.

Geir Lippestad, Breivik’s lawyer, said his client would address a court hearing on Monday about what he had done noting:

“He has said that he believed the actions were atrocious, but that in his head they were necessary

According to latest reports, Breivik believes the time has run out and "Christian Europe" must stand up to the "invaders" much like earlier Christian Crusaders. Indeed, his lawyer added in an interview with the NRK public broadcaster:

“He wanted a change in society and, from his perspective, he needed to force through a revolution. He wished to attack society and the structure of society.”

In other words, this zomboid wasn't prepared to work through the existing political process, but to take the law into his own hands to force change. Worse, we also see - from this morning's reports- he belonged to the anti-tax Progress Party, but quit them because he didn't believe they were serious enough about exclusively cutting taxes and spending. Maybe we need to keep a careful eye on Tea Baggers too.

Earlier, in a 1,500-page "manifesto", posted on the Web hours before the attacks, Breivik documented a day-by-day diary reflecting months of planning for the attacks, and claimed to be part of a small group that intended to “seize political and military control of Western European countries and implement a cultural conservative political agenda.”

He didn't elaborate on what that means, but if U.S. Christian Fundyism is any guide, it implies outlawing all abortions, drastically limiting immigration from other nations, outlawing homosexuality and also pornography. He very probably has no special place in his vile heart for atheists either!

Breivik went on (in his manifesto) to predict a "conflagration" that would kill or injure more than a million people, adding, “The time for dialogue is over. We gave peace a chance. The time for armed resistance has come.”

But did this a-hole really give peace a chance? I doubt it!

How many times have we also beheld this equating of normal democratic socialism with Marxism and (even stupidly) with National Socialism in many other forums and blogs?

Thomas Hegghammer, a terrorism specialist at the Norwegian Defense Research Establishment, asserts that the manifesto bears an eerie resemblance to those of Osama bin Laden and other Al Qaeda leaders, though from a Christian rather than a Muslim point of view. Like Mr. Breivik’s manuscript, the major Qaeda declarations have detailed accounts of the Crusades, a pronounced sense of historical grievance and calls for apocalyptic warfare to defeat the religious and cultural enemy.

This again discloses that Fundamentalist Christians and Fundamentalist Extremist Muslims are brothers under the skin: projecting “demons” onto everything they don’t understand and then attacking it.

Clearly, the European Right – like Breivik- are holding the socialists/left responsible for the influx of Muslims,Africans to Europe – changing its demographics. people and it's related problems. This also explains why Breivik murdered the group of socialist youth. The language you hear and see from this fear driven, and hate- infused (e.g. collaborators of “Satan” etc.) much like one beholds on many fundamentalist or Tea bagger blogs.

Right wing interests (especially talk radio) will soon spin the baloney that Breivik was just a deluded individual and no major dynamic or belief system can be imputed to him. But this is disingenuous, and one need only inspect right wing blogs to see how they can destabilze minds already on the edge.

Delusional and paranoid people certainly do exist everywhere, but when you combine schizotypal delusions with fundamentalist beliefs based on an insane and antiquated book whose primitive god slaughters at will in genocides - you have the recipe for a psycho and acts like Breivik's can be the result. How many more people are we going to be added to the long list of those who died in the name of God? How many more years are we going to continue to pollute the minds of people with primitive beliefs that should be reserved for a time long ago?

What must we do, implant electrodes in their noggins for the protection of democratic societies? As Norway's Prime Minster vowed, "This will not stop us from being a democratic society or from pursuing objectives that are best for the society".

This is good, and we hope he succeeds, certainly more than the U.S. did after 9/11.

In the meantime we need to bear in mind that crazy beliefs generate crazies and crazy acts. Also, every organized religion instigates, enables, and justifies in the mind of would-be perpetrators any act, no matter how heinous, done in the name of their god. The dogma of organized religion and its Bibles provides the ingredients that facilitate and perpetuate division among people. It has been doing that for several centuries, and we have no reason to believe that it won't continue to do the same for centuries to come.

Our job is not to trust any of them, and always be prepared to put a choke hold on a belief if it is inimical to a just society!

Addendum: As usual when one of their own is outed, the reich wing screwball blogosphere spin like ballerinas on a crack-meth mix to try to find a way out. So, the latest emanating from screwball fundie blogs is that Breivik was "no REAL Christian". Now, we have been down this road many times before to expose what we understand as the 'One True Scotsman' logical fallacy. Thus, from the original illustration of it by Antony Flew ('Thinking About Thinking') 3 Scotsmen are at a bar and debating national policy. Two are eating Haggis, a natural Scots food, the third is eating pork and beans. The last one's opinions are then discounted because he's "not a true Scotsman". But as Flew shows, this is merely employing a false-switching premise that tries to cleverly concoct two distinct classes of logical elements from what is really one.

i) Breivik attacked young Labor Party kids at a youth camp and all Labor Parties are regarded as "Socialist" by reich wingers, hence he himself cannot be a REAL socialist!

ii) The other effort, to tie him to 'Neo-Nazis' (via a pseudonym used on a supposed web page), also doesn't cut it. Even if this trick is managed, as I noted in earlier blogs, Hitler's NAZI party was supported by Christians including the German Protestant Church which welcomes Aryans only. I also noted the "real Christians" dodge doesn't work, meaning the assertion that Catholics, Protestants anyone BUT evangelicals isn't a "real Christian" anyway. This is because NO evangelicals of any number were found then in Germany anyway -nor can Evangelicalism claim the only "real" Christians rubric. (Refer again to the 'One True Scotsman' Fallacy)

LET'S ALSO BEAR IN MIND: HITLER AND THE NAZIS WERE RIGHT WINGERS! THEY KILLED SOCIALISTS, MARXISTS JUST AS BREIVIK DID! For much more historical basis for this, please refer to my earlier blog ('If You Want to Know About Nazi Germany Go To REAL Germans'):

iii) Breivik obviously fears and hates Muslims, just like so many of the CHRISTIAN Fundies do. He fears they will overrun Europe via soft immigration policies which is one reason that motivated his attack. In the same way, Xtian fundies want to drive Muslims away from a KY suburban site merely because they wish to build a mosque.

iv) The conclusion is inescapable: Breivik IS a RIGHT WING extremist not of the LEFT, and his brothers in arms in this country, especially CHRISTIAN fundagelicals, don't wish to take ownership for that fact! Just like they prefer not to admit Rev. Jim Jones, or Rev. Fred Phelps are of their ilk!

They are classical logical Houdinis when it comes to trying to escape associative blame but hey, who can knock them for that? The fact remains it is their odious, exclusionary BELIEFS which spawned vermin like Anders Breivik and Jim Jones, because it makes possible demonizing one segment of the human race, which is but a step from offfing them.

Putting your enemies in "devil horns" and accusing them of "allegiance to Satan"? You're NO different in mindset from Anders Breivik!

Deal with it, hypocrites!!
Posted by Copernicus at 9:50 AM