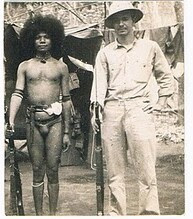 On this 4th of July we'd all do well to seriously consider the words of one senior Master Sergeant: Patrick Olson of Des Moines, Iowa, currently serving with the Air National Guard at 'Camp Leatherneck' in Afghanistan. He has a message for the folks back home.


"Well, I just tell you, I guess, that freedom isn't free," says the sergeant. "A lot of people don't like that we're still over here, but the mission isn't quite finished yet -- and you know freedom isn't free. I guess that's the main message."

It should be the particular message, not only to the PEOPLE (who since 9/11 have been enjoined to "go out and shop" by GeeDumbya Bush) but also those congress critters that adamantly refuse to pay for the military occupations in those far off places, including providing the personal armor for individual protection, as well as on the vehicles which ply the highways and byways.

The sad thing is, as my dad told me (before he passed away two years ago), the country ignores any sacrifice now while everyone sacrificed during World War II! Everyone from the corner grocer, to the auto repair mechanic, to the pawn shop owner. He was in New Guinea (see photo, taken with Papua, New Guinea headhunter tribesman) and the Philippines fighting against the Japanese Empire, but he knew that back home the folks were also sacrificing, not skating by! He knew they were paying higher taxes, and also subject to rationing of petrol and certain food stuffs.

Indeed, Sec. 8 of Article I of the Constitution clearly states:

In other words, it was expected that taxes would be used to pay for military operations regarded as "common defense". Thus, the only reason not to have increased taxes since these operations commenced in 2001, is because congress doesn't regard them as contributing to the common defense. But in that case, all those troops are left hanging out there- and no wonder they suffer from lack of personnel and other armor, as well as supply problems.

The sad, sorry and despicable fact is that by cluelessly and recklessly allowing the George W. Bush tax cuts and their extensions, the mass of citizens in this country have been sheltered from being asked to sacrifice for two large military occupations. In this way, the majority of citizens (other than the immediate famiies) have basically vacated Iraq and Afghanistan from their minds, and acted as if those sacrifices no longer exist...or have any reality to them. Why should they if they aren't being made to sacrifice in some way?

I just hope after Bush re-enters the White House he takes those damned tax cuts out of the picture and RAISES taxes!

Alas, he didn't, the cuts continued and were even extended for another year last December. This despite the military committment to Afghanistan being extended another 4 years, to 2014. This is effing insane! It shows a total disconnect between the cost of these operations, and the fiscal reponsibility to pay for them OURSELVES....i.e. not borrowing from the Chinese!

All Americans should get it into their heads "freedom isn't free", and if that means anything it means paying higher taxes so long as service men and women are in far off places carrying on military operations. Not to pay taxes for those, is to essentially devalue what they mean, as well as excusing the rank and file of our citizens from any responsibility!

On that note, either raise taxes to pay for their continued participation - OR bring all the troops home and admit we're cheapskates that only use the term "freedom" when the rhetoric is expedient and entails no personal pain or other sacrifice. If we are keeping more than 150,000 troops out there in harm's way, we have a national DUTY to PAY for that involvement, else bring them home! By continuing to borrow money from the Chinese for foreign military entanglements, we're only making a mockery of our own Constitution and responsibilities.
Posted by Copernicus at 11:53 AM