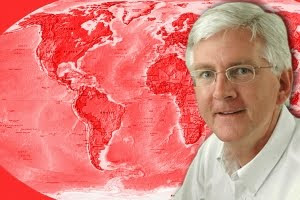 Well, let me clarify that: there are two types of simpletons: 1) those who have this condition as a result of DNA, and are congenitally so (and hence, we try as far as possible to give them a break) and 2) those who become de facto professed simpletons at the behest of special interest groups that hire them to dumb down science and turn it into PR, via a process we call "agnotology".

Stanford historian of science Robert Proctor has referred to the trend of skeptic science sown for political or economic ends - e.g. in imparting ignorance and faux skepticism, as agnotology. Inevitably, as the warp and woof of agnotology metastasizes like a cancer, people (mostly those lacking the benefit of physics or even general science education) become dumbed down too, and hence climate science simpletons - as bereft of empirical grounding as those sowing it.

Agnotology is derived from the Greek 'agnosis' and hence the study of culturally constructed ignorance. Proctor notes that when a society doesn't know something it is often because special (often paid) interests have worked hard to sow immense confusion on the issue. People read 'A' then see 'B' ostensibly refuting it, and without a hard science background themselves (at least two years of university physics or chemistry plus calculus), are "lost at sea". They lack the critical thinking scaffolding necessary to pierce the veil of buillshit and confected bollocks.

Now, enter the latest simpleton: University of Alabama "scientist" Roy Spencer. As Discover Magazine's "Bad Astronomy" blog points out, Spencer is an author for the über-conservative Heartland Institute, which receives substantial funding from ExxonMobil. He is also affiliated with two other think tanks funded by ExxonMobil. Hence, he is a useful "idiot" for them and a simpleton in the cause of its agnotology agenda.

Anyway, Spencer's latest agnotology foray, in the journal Remote Sensing, argues that heat is actually escaping from Earth much more quickly than current climate models predict. This assessment, if accurate, could mean that the dramatically rising temperatures that scientists currently anticipate would not ultimately occur. In other words, all the newest global warming models would turn out to be wrong.

The hypothesis hinges on the idea that clouds trap heat in our atmosphere, not carbon dioxide, and there's nothing we could, or should, do to affect that. According to prevailing (and well-accepted) global warming theory, carbon emissions warm up the atmosphere, which causes greater quantities of water around the world to evaporate. This, in turn, increases the rate of cloud formation, which exacerbates the warming. (While greenhouse gases are certainly effective at trapping heat in our atmosphere, clouds are even better at it.) The additional warming causes even more evaporation, followed by cloud formation and more warming.

This is referred to as a positive feedback loop.

Now, we do concede here (as per past research), clouds are very poorly parameterized in climate models as a whole. This has led to an ongoing debate over the past 5-6 years of whether in fact the sign of albedo change is positive or negative. (See e.g. Can Earth’s Albedo and Surface Temperature Increase Together? in EOS: Transactions of the American Geophysical Union, Vol. 87, No. 4, Jan. 24, 2006, p. 37)

As the authors note, though there is some evidence that Earth’s albedo has increased from 2000 to 2004 this did NOT led to a reversal in global warming. The authors cited the most up to date cloud data released in August, 2005 from the International Satellite Cloud Climatology Project (ISCCP). The data – from a range of meteorological satellites covering the entire Earth, disclosed the most likely reason for the anomaly is primarily in the redistribution of the clouds.
Thus, as the authors pointed out (ibid.):


The point is that the role of high clouds as heat "incubators" (trapping IR) does not ipso facto remove or preclude the role of CO2 as an additional warming contributor. Spencer's primary error then is in adopting rigid either-or logic to say well, if the heat is insulated from and emanating from clouds then carbon dioxide is irrelevant.

The other specious part of the argument (since clouds are mainly composed of water vapor, H2O) is that water vapor is a more effective agent than carbon dioxide for heat trapping. But this is patently false! Even a tiny, minuscule amount of CO2 is vastly more efficient at blocking the re-radiation of energy than any amount of water vapor- at those bands. (See the NRC Report published ca. 2001 that gives the relative W/m^2 forcing contributions of each greenhouse gas). Part of the misconception- which persists (as evidenced by Spencer's work) arose because early researchers, lacking the current technology of infrared spectroscopy, assumed that water vapor bands already blocked out most of what would (ordinarily) be taken by CO2. (Cf. ‘The Discovery of the Risk of Global Warming’, by Spencer Weart, in Physics Today, Jan. 1997, p. 34).

Meanwhile, other sources (including at NASA) have blasted Spencer's conclusion (that cloud formation drives temperature change) as unrealistic. Others questioned the statistical significance of his findings. The overwhelming sentiment is that the satellite data is inconclusive, but when compared against a large body of evidence from other sources, Spencer's findings seem unremarkable.

People should also be reminded here that Spencer's satellite-based research has been refuted in the past. In 2005, he and a colleague were compelled to apologize for a report in which they suggested that the lowest layer of our atmosphere is cooling, when the data he used actually supported the entirely opposite conclusion.

Meanwhile, specious research by the likes of Spencer has diverted attention from genuine findings and projections such as released in a report by the UN earlier this month, noting:

It is rapidly expanding energy use, mainly driven by fossil fuels, that explains why humanity is on the verge of breaching planetary sustainability boundaries through global warming, biodiversity loss, and disturbance of the nitrogen-cycle balance and other measures of the sustainability of the earth’s ecosystem.

At the same time, a group of American researchers released a study showing that rising temperatures in the Arctic could exacerbate climate problems as massively carbon-producing forest fires heat up the permafrost region, releasing trillions of gigatons of methane - another greenhouse gas. This will amplify the heating effect by 50-100%!

Lastly, the National Oceanic and Atmospheric Administration estimated that extreme weather in the U.S. has caused $32 billion worth of damage so far this year. Eight such disasters have cost more than $1 billion each, one shy of a record.

As we know, one of the consistent predictions of early global warming is extreme weather episodes, including extended heat waves (with persistent high night time temperatures) as well as extended droughts and heavy rainfalls in other areas. All of these have been borne out the past year.

Will this stop the agnotologist-simpletons like Roy Spencer? Not likely, not so long as they're being paid well to use their "Ph.D." labels to peddle this ignorant propaganda. Just as Jason Lisle has been paid well by his Young Earth creationist benefactors to flaunt his "Ph.D." letters to promote their pseudo-science.

The conclusion is clear: Americans need to examine carefully the sources from which they're receiving their information! Better yet, try to take a real physics course to be able to critically parse these issues on their own!
Posted by Copernicus at 9:08 AM