Why I'm Excited About the Parker Solar Probe

Artist's conception of the Parker Solar Probe which will approach within 4 million miles of the Sun.

As a long time solar researcher, I was excited to hear the NASA announcement on Wednesday to launch an unprecedented mission directly into the solar atmosphere.  That means coming within 4 million miles of the solar surface  (photosphere) and withstanding temperatures of up to 2,500 F.  In fact, I don't remember being this revved up about a solar mission since the mid-1980s when the Solar Optical Telescope was to have made ground breaking investigations - but was scuttled as a result of budget cuts. See e.g.

By contrast, the Solar Probe Plus - renamed the "Parker Solar Probe" after solar physicist Eugene Parker, is already fully funded to the tune of $1.5 billion. For perspective, this is less than half of what we waste on Afghanistan in a given month ($3.1 b).

"This is the first time NASA has named a spacecraft for a living individual. It's a testament to the importance of his body of work, founding a new field of science that also inspired my own research and many important science questions NASA continues to study and further understand every day. I'm very excited to be personally involved honoring a great man and his unprecedented legacy."

NASA had previously named about 20 spacecraft after distinguished researchers, including major space telescopes like Hubble, Chandra and Spitzer, as well as smaller missions like Fermi.  However until now NASA had never named a spacecraft after a researcher during their lifetime.

Why is Eugene Parker so special ?  Well, to many of us who've invested segments of our lives into solar research he is seen as the father of solar physics. It was while Dr. Parker was still a budding young astrophysicist at the University of Chicago that he wrote a seminal paper in 1958 about the solar wind and its association with the interplanetary magnetic field. (Parker, E.N. : Dynamics of the interplanetary gas and magnetic ﬁelds,” 128, 664, Astrophys. J., 1958.)

The paper can be accessed in full here:

Fast forward some 21 years, to ca. 1979. Measurements over decades of the so -called Evershed effect showed the plasma motions to be radial and inwards. There did not appear to be any 'escape hatch' for the rising gas columns represented by the umbral dots. This being the case sunspots ought to heat up and reach equilibrium with the surrounding photosphere after a few days, and yet spots with umbral dots were observed to last weeks.

And so the "multiple flux tube" model of Eugene Parker was born (cf. Astrophys. J., 230, 905-13). In the diagram shown below note the geometry of the field lines extending from beneath the photosphere (in the convective zone) to far above it. The 'flaring field' on top is buoyant for reasons that have to do with the stratification of the solar atmosphere. The Wilson depression is shown as the indentations at the umbral surface on either side.

Note carefully that we have, in effect, a single flux unit up to a distance 'x'  below the umbral surface. After that, the multiple flux tube structure becomes quite evident. Observe further that regions of field-free gas occur between the separate flux elements. Lastly, the arrows labeled v d indicate the direction of the convective downdraft. This downdraft has a twofold purpose in Parker's model:

I) To 'herd' separate flux tubes together and keep them together, and

2) To remove heat from beneath the sunspot

Parker in his paper (ibid.) showed that the downdraft velocity needed to remove heat from beneath a sunspot  (at a depth of 2500- 5000 km) is on the order of the Alfven velocity for this region or about 2 kilometers per second. This then is adequate to provide the observed umbral energy flux of 0.2 F o  where F o  denotes the normal photospheric flux.

The full paper can be accessed here:


A key fact relevant here is that heat flux and magnetic field strength is independent of sunspot area. The parameter that best helps to explain this is the vertical distance 'x'  which the model predicts is characteristic of all sunspots whether they be 4,000 km or 40,000 km across. Calculations by Parker show x = 1150 km approximately. It is the limiting distance below which an instability would occur in a single flux tube.

All of this served as an immensely useful guide when I wrote my thesis relating sunspot morphology to the occurrence of a special type of solar flare. Indeed, Parker's multiple flux tube model figured into the essential morphological characteristics when I invoked magnetic classes as one barometer for flare frequency.

From all these points of view, the use of Eugene Parker's name for this novel spacecraft is welcome and quite understandable. Indeed, the mission is a culmination of Prof. Parker's research in the fields of solar physics and heliophysics (the latter distinguished from the former on the basis of the extent of the solar wind, e.g. into the heliosphere - or the magnetically affected region that extends beyond Pluto's orbit).

The dynamics for the probe are now known in essence and entail entering a preliminary solar orbit, followed by seven flybys of Venus using its gravity to edge closer to the Sun, ultimately reaching the atmosphere at a distance of 3.8 million miles. At its peak the probe will be moving at 430,000 mph and will then commence near orbits of the Sun, making varied measurements as well as taking images - at least many of which are hopefully of coronal loops - increasing dramatically the existing resolution.  We already have a generic, hypothetical  profile for such loops, e.g. 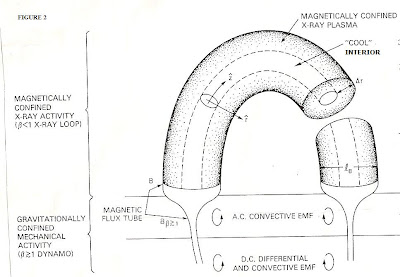 But we really need to refine it in order to narrow down the origin of any instability that might occur, say to release a loop flare.  Most experts on coronal loops I've spoken to at assorted solar conferences believe we need a resolution of at least 0."40 or better.  This is roughly equal to the separation of a close binary star system. (Slightly larger than the separation for Beta Cygni.)

Naturally, I'm excited because if such coronal observations are also made they would be what my own (1980s) research lacked because of the untimely scuttling of the Solar Optical Telescope owing to budget cuts. This occurred just as my research was wrapping up.

Also critical - and which I look forward to - is the enhancement of space weather forecasting potential.  Space weather phenomena include: solar flares and especially coronal mass ejections, e.g.


As we know these violent events can affect everything from electrical grids and GPS systems to the navigation controls of aircraft.  If a monster flare triggered a "central meridian"  CME we could expect adverse effects on all GPS positioning satellites. Bear in mind that GPS, besides providing directions for road users, allows synchronized cell phone conversations, as well as orchestrates air traffic not to mention 'date stamping' most financial transactions and guiding the dynamic positioning of the majority of deep sea oil drilling and gas operations.


For many of us who've been deeply involved in solar physics research, the Parker Solar Probe can't take off soon enough.