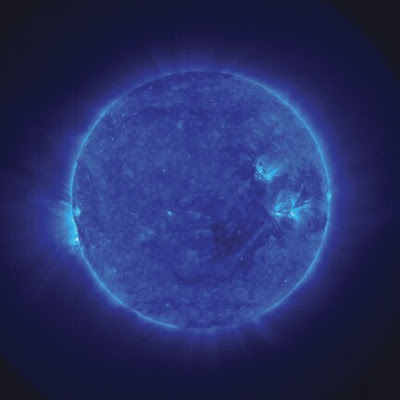 Our own Sun is about 4.6 billion years old (all the 'young Sun' nonsense of fake astrophysicists like Jason Lisle  to the contrary,  see e.g.

One example for study is the star HIP 102152, which turns out to be the closest match to our Sun ever found in terms of mass, temperature and chemical composition. The difference is that it's almost 4 billion years older providing a glimpse into our own star as it ages. One particular insight concerns the element lithium. It exists in high amounts on some stars but is virtually absent in the Sun.

Interestingly, solar twin researchers have found HIP 102152 contains even less lithium than the Sun, suggesting that as our star ages its lithium content will be further reduced. This is backed up by the finding that a previously discovered solar twin named 18 Scorpii has more. Taken together the findings suggest that the hot interiors of sunlike stars - where nuclear fusion occurs - gradually burn through lithium as the stars age.

Also like the Sun, HIP 102152 has low amounts of iron, magnesium and silicon, elements which tend to make up the bulk of rocky planets such as Earth. The only way they would have been found on Earth - or even in the Sun - is because the latter evolved from a solar nebula replete with the residue of those higher atomic number elements cast off in supernovae.

More research needs to be done to confirm and expand insights, but so far - at 8.2b years old- HIP 102152 is the oldest solar twin ever found. Meanwhile, in less than 2 billion years the Sun will exhaust the hydrogen in its core via the same nuclear fusion. When this happens it will balloon to hundreds of times its current diameter, engulfing the Earth and likely Mars too.  This is what we call the 'Red Giant' phase.

This ensues because  a new "burning" phase is ushered in (at higher temperature), such that the following reaction series, known as the ‘triple alpha’ process, kicks in:

Here, the two alpha particles (helium nuclei) first fuse to give unstable beryllium and a gamma ray (gamma), with 95 keV energy absorbed. Then the beryllium fuses with a helium-4 to give carbon–12 plus a gamma ray and 7.4 MeV energy given off. In this way a new cycle commences, leading to a heavier molecular weight core. Each successive burning phase, however, is less efficient than its predecessor ( seen by comparing the energy given off in the triple alpha process to that given off in the proton-proton cycle, see e.g. http://en.wikipedia.org/wiki/Proton%E2%80%93proton_chain_reaction)

The key thing to bear in mind in terms of a stable phase (i.e. ‘Main sequence’) star like the Sun is that it is in pressure-gravity balance. The outer gas pressure balances the weight of its overlying layers. Any condition likely to disrupt this balance is therefore of paramount interest.

In the triple alpha process the balance is disrupted such that the outer gas pressure overcomes the inward directed gravity of the overlying layers resulting in expansion.

We have to hope that if humans still exist, they will have long since abandoned Earth. If not, they will suffer the consequences.