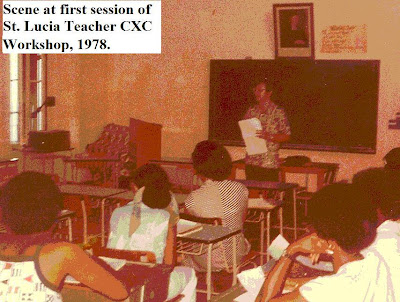 Conducting a workshop in August, 1978 to help Caribbean teachers with the CXC Astronomy syllabus

One of the amusing comments of Caribbean teachers attending a CXC (Caribbean Examinations Council)  astronomy workshop in August, 1978 in Castries, St. Lucia was:

"Why is there so much physics and math in this syllabus content? Are we expected to be able to integrate both these subjects?"

Well, uh, yes .....that's why this subject is called Integrated Science and why astronomy is taught for one trimester as part of it. After doing some basic background review, however, most of the teachers grew a bit more comfortable.  Though astronomy ultimately became defunct after five years - because fewer and fewer teachers were prepared to handle it - the seeds sown in the inaugural year allowed a vast number of science teachers to enhance their physics and math skills.

Could a deficit in physics and math background, skill also explain why U.S. students continue to not do so well compared to other advanced nations? According to recent results of a world wide test - administered to over 156,000 people in 20 nations, between the ages of 16 and 65 - the conclusions are not sanguine, for the students or the adults. In the case of the high school students they placed 31st in math, and 24th in science, not having changed position in the last decade.

Meanwhile, the students of Shanghai, China (the nation that's just dispatched a space craft to the Moon) scored highest, with their results equivalent to at least one additional year of school - over U.S. competitors. Nor was this simply a matter of regurgitating material, but instead the students demonstrated they "were very good at higher order skills reflecting what you can do with what you already know."

One example of this type of problem would be:

"A group of 4 astronauts lands on Mars with solar radiation collection material of total area 2000 m^2. If the efficiency of the material is 30%, and the ambient night time temperature on Mars for their base location (Isidis Planitia) is -40 C (10 C day time high), will they have adequate collecting material if the solar constant on Mars is 620 W/m^2? (Assume insulating material with a thermal conductivity of 0.08 W/mC, and a need to keep the inside area of their domecile at least at 10 C, requiring solar radiant energy collected of at least 1,200 W per minute for an area of 10 m x 10 m.)

That Chinese students are proficient at doing this type of critical thinking application problem and U.S. students mainly are not, ought to be severe cause for worry. In addition, this divergence can also explain why so many in the U.S. still fail to grasp the basics of climate change, including why spates of frigid weather and snow do not contradict it.  This take is also reinforced by the fact that American adults scored below the international average on a global test in math, reading and problem-solving using technology — all skills considered critical for global competitiveness and economic strength.

Meanwhile, adults in Japan, Canada, Australia, Finland and multiple other countries scored significantly higher than the United States in all three areas on the test, according to results released Tuesday by the Organization for Economic Cooperation and Development, which is made up of mostly industrialized member countries.  Are we a nation in profound decline? I submit to you that given the results on multiple levels, we are, and there's no gainsaying it.

How complex were the problems? Maybe you are thinking they were similar to the sample one shown above. Not so! Beyond basic reading and math, respondents were tested on activities such as calculating mileage reimbursement owed to a salesman, sorting email and comparing food expiration dates on grocery store tags.  None of which require profound insight or genius level skills, or shouldn't. But recall that a similar test given in the 1980s disclosed adults who: didn't know the Sun was a star, and believed the Sun moved round the Earth, not vice versa.

Not only did Americans score poorly compared to many international competitors, the findings highlighted the gap between American high- and low-skilled workers, and how hard it is to move ahead when your parents have not. To fix ideas,  in both reading and math, for example, those with college-educated parents did better than those whose parents did not complete high school.

Most worrisome, the U.S. tested below average on literacy. Coupled with the nation's "large social disparities, the test's findings reveal that for Americans, social background has a major impact on literary skills," the study said.

As we confront an era with ever more advanced technological issues, not only climate change but (very soon) the advent of quantum computing and bio-engineering, one wonders just how prepared Americans are. While too many still remain mesmerized by the bubbling DOW, they'd do much better to ensure they attain essential critical thinking skills - for themselves and progeny.

A set of sample math and science questions to see how you fare:

1)  In a given week a salesman travels 134 miles, during which he pays an average of $3.29 per gallon for gas. If his Buick Enclave gets 12 miles to the gallon, how much should he be reimbursed?

3) A girl is given 100 cubic centimeters of boiling water in a beaker, to which 50 grams of  ice is added. Using a thermometer, how will she know when the mixture has reached thermal equilibrium?

4) One Big Mac and Cheese with condiments has 3,800 calories. You want to burn them off with exercise, and choose jogging. This allows 150 calories to be burned off per half hour,. How long will you need to jog to burn off the Big Mac?

5) An air conditioner consists of a fan coil unit and a compressor unit.  When switched on, the fan coil unit rated at 250 watts, operates continuously. The compressor unit - rated at 1.6 kilowatt- operates only 40% of the time. If the air conditioner is switched on for 12 hours a day, find the total electrical energy in kwh (kilowatt-hours) consumed in a 30-day month.

8) The floor of a room is in the shape of a rectangle. The floor is c meters long. The width of the floor is 2 meters less than its length. State, in terms of the unknown c:

i) the width of the floor

ii) the area of the floor

Posted by Copernicus at 8:27 AM