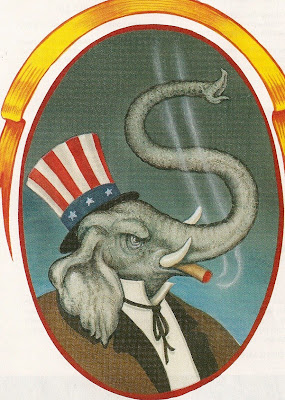 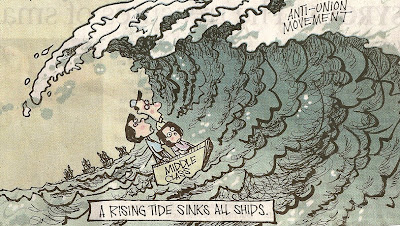 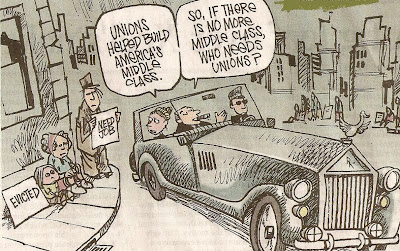 As we heard the news that the proto-Confederate, fascist pig Gubernator of Wisconsin, Scott Walker - in concert with the Repuke state senate- had employed an "unbundling" legislative ruse to take away union collective bargaining rights, the question arises: What will happen now? To the unions, to the people, and to the state. There is no easy answer but the future looks cloudy, whether for the hardworking teachers dispossessed of their hard fought for rights by this miscreant (acting as a tool for the corporations), as well as the people - including lower paid school janitors and cafeteria workers just barely hanging on.

Most of the latter group have homes underwater (meaning they owe more on their mortgage than the home is worth) plus many (according to one Milwaukee Journal -Sentinel report two weeeks ago) said that any overturning of collective bargaining might push them over the edge. According to one janitor in a Milwaukee High school, "I'm hanging on by a thread. Any cut in my salary and I lose my home".

But maybe this is what Scott Walker wants. Because this slimeball has now succeeded in enacting mass slavery of the Cheesehead populace on behalf of the corporations. After the outrageous 'Citizens United' ruling what more could these corporations want? Well, exactly what little Scottie Walker delivered: the potential for an economic holocaust, and endless "race to the bottom" as union pay and benefits are now cut in never -ending rounds. A ploy that will also enable the private unions and more importantly ALL private non-union workers, to be predated, exploited and ravaged even more than they've already been - and thus, on to the total destruction of the Middle Class.

Think about this: no more decent hours, as public workers can be made to work unpaid overtime just like many private workers. No more "time and a half" and you can kiss any family life goodbye. Which also means mom will likely have to work too, to make ends meet, leaving junior and missy unattended so they join gangs, get into drugs and other nasty business. So look for an increase in juvenile delinquency.

Milwaukee gangs had alread begun to decline when Walker pulled this stunt. Now, the Crips and Bloods that moved operations into Beer town will be joined by the native gangs like the 27th street Knaves and Meinecke Avenue Marauders. Walker ought to be happy as gang wars break out all over and possibly migrate even to Madison, the state capital.

But why express surprise? The state "budget" crises seeking to destroy unions are basically mirrors of the FY2011 Republican Congress' efforts on the national scale, to destroy the last vestiges of the Middle Class, so they it can be exploited by corporate power. Think about what goes into effect, if their insane scheme were to pass: no job safety inspections while inspectors are furloughed for up to 3 months at a time (meaning the next machine that ensnares a worker in its maw and chomps his legs up...will likely do it to many others in the interim), no food safety inspections while inspectors are off the job, so the next fruit, peanut butter or cookie dough you sample could be laden with salmonella. Ten thousand teachers laid off, and aides cut as well leaving kids to fend for themselves.

Plus, one third of all administrators cut from Social Security and Medicare, as well as the VA, so the checks you depend on to survive the month, may be anywhere from a week to 3 weeks late. But, hey, who's counting? Not the effing Repukes, who are so dastardly they employ the ruse of budget deficits to kill the Middle Class. As Richard Trumka put it:

"This isn't about fiscal responsibility or deficit control. It's about the most bald-faced assault on America's middle class I've seen ever - and clear political payback to the CEOs who poured millions into the 2010 elections."

Actually, when one looks at corporations as an aggregate, it is estimated they poured $300 billion into the November 2010 midterms, mostly to Republican candidates. In 53 of the 72 contested Congressional races, and at least three Senate races, Republican candidates that received the most corporate money won election handily including the governorship of Wisconsin. This is a sickening travesty. (Okay, where could the corps. come up with $300b for this? Well, they putatively have a 35% corporate tax rate, but via all kinds of ruses, including hanging shingles in the Bahamas, they can offload nearly 33% of that leaving only 2% to pay- thereby clearing on average over $600 b a year they'd otherwise lose, so $300 b is easily manageable, and the return will be humongous if all public workers can be rendered serfs!)

Let's get several things clear here, including that corporations were kept on a short leash until the disastrous Santa Clara County v. Southern Pacific Railroad ruling of 1886. In that egregious decision (ruled the worst since the Dred Scott decision by many) the U.S. Supreme Court ruled that corporations are persons, and entitled to the same constitutional protections as flesh and blood citizens. This was ramped up a hundred fold by the totally insane Citizens United v. Federal Election Commission decision in 2009, which essentially awarded these artifacts free speech rights as well - and free speech (via money) a hundred million times that of average citizens.

Thus, Citizens United, though it dealt with free speech as applied to money in political campaigns, can be seen as the apotheosis of more than a century of enabling corporations' lawless behavior.

Make no mistake that these things are like Frankenstein monsters but even worse. A corporation can inflict bodily harm but never get imprisoned (for example, when a product kills, maims, or burns down a home). It can even destroy a whole town's economy like chemical company W.R. Grace did (via asbestos contamination) to Libby and Troy, Montana, but never face major sanctions for doing so. (They got bankruptcy protection in 2001, though 120,000 suits are still outstanding. Often when cases are settled, the corporations need never agree to any blame! Thus, they're enabled to continue their behavior.)

Corporations neither possess bodies (or souls, to use the religious' parlance) yet they are given the right to speak and influence public opinion by their money. Worse, much worse than any scifi-or horror monster, they are immortal, and can change shape (through mergers and spin-offs) alter its name and identity at will - things no citizen is allowed to do even if s/he could. Yet despite having no human form the corporation is allowed to enjoy the same legal protections as we humans. This is almost as if, to invoke a religious-evangelical analogy, demons and Satan were granted the same rights to enter Heaven and take what they would, however they desired! And yet we find actual fundies defending the rights of these earthly "demons" - the corporations!

Thankfully, at least one state, Vermont, is now prepared to repeal those "rights". On January 21, state senator Virginia Lyons introduced a resolution - co-sponsored by ten other members of the Vermont Senate- that seeks to revoke the granting of personhood rights to U.S. corporations. The bill calls for a constitutional amendment that declares that "corporations are not persons under the laws of the United States".

What exactly is it the corporations want then?

They want a global labor pool where all participants are equal, and none possess benefits or perks above any others. In other words, the worker in the U.S. possesses no more rights, or benefits (and ultimately pay scales) than the workers in Beijing, Botswana, or Bangalore. They want a totally FLAT planet in terms of labor, and once that happens all workers are in dire jeopardy because their own continued reproduction makes it certain a vast surplus labor pool will remain, to the corporations' benefit.

The road to leveling has already begun with the Repuglican miscreant governors in this country, and the corporations are already nearing their respective wet dreams over the prospect.

Let us hope the people are still able to bite back, bigtime, by next year! In the meantime, the workers who will have lost critical income in Wisconsin as a result of Walker and the Repuke Senate can take one more step to pressure them: halt the purchase of all non-essential goods or services, including entertainment. Cut the cable or direct-tv off, stop going to movies, stop eating out. If you don't have the money, and you won't, then take it out of the hide of consumerism.
Posted by Copernicus at 11:32 AM