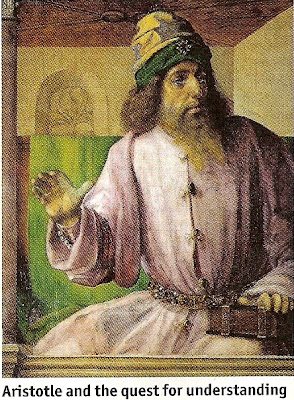 In the previous blog to do with free speech, and the fact no speech can truly be free unless it's also responsible, I noted also the role of Aristotle and ascertaining the "golden mean" between two extremes as the basis for a generic moral compass. Much of this brilliant and temperate morality was set out in Aristotle's masterpiece, The Nichomachean Ethics, in which he applies this thinking to numerous examples.

Aristotle in this great work, laid out two particular criteria before any reasonable ethics could be formulated. These criteria applied in two distinct spheres of intellectual activity. One is related to the pursuit of knowledge for its own sake, and in this tableaux the object of the contemplative intellect is truth. In addition, there must exist the correlation of right desire with truth which is the province of the calculative or practical intellect.

At all times, when discussing the nature of truth, we find Aristotle is a realist. He believed:

1) The goal of truth is to conform the mind to the way things are.

2) One must first know the way the world works to be able to improve it via an ethics based on the practical intellect.

In these ways, Aristotle would reject all holy books or scriptures as providing any useful ethical guides, since they tend not to conform to the way things are, or to acknowledge (other in the most generic and remote ways) how the world works. They are intended primarily as fictions for inspiration.

Finally, Aristotle believed as per his Nichomachean Ethics, that one must first know the truth about himself before one can develop appropriate skills and virtues. Within the scope of these skills and virtues, Aristotle defined prudence as pre-eminent, that is, it is the practical wisdom of knowing how to act, and thence how to secure the ends and goals one seeks for one's life. The golden mean structure is implicit in the deliberative exercise of prudence but is also evident in the judgment phase of prudence - when one is called to make a right action (or not).

Finally, in fully forging his Nichomachean Ethics, Aristotle is careful to invoke the practical wisdom of prudence in pursuing the maximum good (for the greatest number) and avoiding evil, or at least minimizing it if it is impossible to avoid.

As I had shown in an earlier blog, all of these lead directly to the moral stance of MORAL PROVISIONALISM.

In the standard of Aristotle's golden mean, this avoids the excesses and extremes of either absolutism or moral relativity.

Nearly a year or so ago, I brought this matter to the fore in responding (in The Barbados Advocate) to an absolutist named Paul Kokoski. Kokoski had earlier written:

“the West turned its back on hard won freedom and voluntarily succumbed to the new dictatorship of relativism that is no less evil than the fascism that preceded it....The new tyranny recognized nothing as being definitive”


Kokoski’s recommendation was implicitly predicated upon Moral Absolutism but as I pointed out in my response, that was responsible for more corpses than most humans can comprehend, starting with the nearly one million killed or mutilated through the Crusades and six centuries of the Catholic Inquisition, to the Nazi Gas chambers that killed 6 million Jews.

The tragedy of the human brain inheres in its pretensions to a level of discerning knowledge and perfect insight simply not available, given its inherent defects and limitations. Chief among these is the brain's tri-partite architecture. Specifically, the (most ancient) paleocortex sits evolutionarily beneath the more evolved mesocortex and neocortex, the latter of which crafts concepts and language.

Jacob Bronowski when he visited Auschwitz and pointed to its remnant gas chambers, in the BBC documentary The Ascent of Man observed(and book, by same name, p.235):

In other words, the absolutism Paul Kokoski appeared to endorse was actually embedded in the concentration camps of the Third Reich. Hitler would've been elated at Kokoski's claim of absolute knowledge because Hitler believed HE had absolute knowledge that all Jews were worthless vermin.

Note this isn't "tolerance" in the normal philosophical or social sense but rather the engineer's definition: i.e. a mechanical part (gear shaft) is not perfectly rigid or fixed in its motions but may move 1mm backward or forward, say. Those allowances mean the machine's precision is not exact. In similar fashion, one must concede that humans – with limited knowledge- lack the wherewithal to issue absolute, fixed moral laws. Note this is not an absolute statement in itself, merely a statement of limitation, biological and theoretical, based on facts. If brains are limited in size and capacity they simply can't know everything, hence, can't render absolutist propositions about any positive actions. (This also follows from the Godel Incompletness Theorems).

By the same token, pure moral relativity is unacceptable, since it leaves no room for contemplative intelligence to act in concert with prudence. In effect, moral relativity is based on the falsehood that we can know NOTHING so we are responsible for NOTHING. Any action goes because all actions are ultimately "relative" and we can always find somewhere they're justified (such as in Brazil, with males allowed to shoot their wives if found with another man.)

Is there an alternative to moral absolutism or moral relativism? Author Michael Shermer (The Science of Good and Evil) believes there is and he calls it “moral provisionalism”. According to Shermer:

An illustration of moral provisionalism would be the case of the American nun excommunicated by the Catholic Church in Arizona last year for saving a 27 year old mother’s life at the expense of her fetus’. Her moral choice was either to let the birth occur and see both mother and infant die, or prevent the birth (because of the mother’s blood pressure complications) and save the mother.

The error of the Bishop that excommunicated the nun was in upholding an absolute right to life ethic for both when in practical terms (that exercise of practical intelligence again) both could not survive. But this is the very danger of moral absolutism. It prefers all involved in a case to perish to preserve an abstract principle, rather than allowing any to survive- but keeping the abstract principle intact.

One hopes Mr. Kokoski (and others of his ilk) would re-examine his own moral assumptions before next espousing absolutism. We live in the real world here, and need to have a morality which reflects it. This is not “nihilism” but rather moral provisionalism!
Posted by Copernicus at 2:05 PM