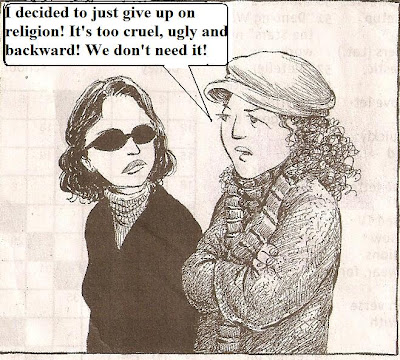 The latest canard to emerge from the brains of the conservo ideologue god-mongers and fundie lackeys is that atheists are "overthinking" and it's really very easy just to submit to Godism and believe... They then ask us to remember the mnemonic KISS ("Keep it Simple Stupid")

Hey, I thought we ALREADY were!

I would have thought, using basic logic and reasoning here, that accepting the world as presented is manifestly simpler than accepting a world-universe populated by legions of invisible entities, including demons, wights, succubi, incubi, and demoniacs as well as invisible regions like "Heaven" and "Hell" - NONE of which have been demonstrated!

Is not the natural world as is an EASIER proposition to consider than a supernatural one, for which these geniuses haven't provided one scintilla of evidence? Oh wait! Mayhap it is our asking for evidence that they regard as "over thinking"! And I thought all the zombies were relegated to AMC's 'The Walking Dead'!


What they do is turn the entire process of thinking on its head! While the sane person, who is capable of rational thinking simply accepts what is presented, then asks for evidence, the supernaturalist rejects what is merely presented (by way of his or senses or devices) and insists there must be more - yet is unable to prove it. (Though he has the absolute temerity to threaten us with his imaginary repository of damnation if we disagree!)

Now, just take morality and ethics as a further example here. Any persistent observer of human social interaction will note that the vast majority of people are law-abiding and decent folk who naturally practice a common-sense and utilitarian ethics defined by the ancient (from Babylonian times) precept: 'Do unto others as you would have them do unto you'. For proof, one need only look as far as the upstanding Atheist or agnostic who inhabits every community and who - though he disdains a deity- nevertheless treats his fellows with compassion and respect. No threat of eternal punishment or commandment ordains this behavior. Instead it is the conscious and deliberate recognition that the promotion of the welfare of others is directly linked to the one's own welfare.

Unfortunately, what religions have done is to take the natural code of ethics most people follow and embellish it with a blizzard of superstitious precepts and injunctions. These are superstitious since, inevitably, they are linked to the supposed dictates of a supernatural "being" who will not hesitate to "punish" those who disobey "him.

Again, overthinking - when a simple natural ethics is all that's needed for a society to survive and even prosper.

"Overthinking" is then definitely on the the part of believers for whom the very act of belief means implicitly that one must ADD to reality as presented, and do so minus any evidence or the provision of necessary and sufficient conditions. This very addition comprises an extension of thought (or more likely, imagination) that is redundant.

Consider: incorporating supernaturalist entities does nothing in terms of improving scientific predictions. Factoring in "Satan" or his "demons" doesn't assist me in predicting a major flare (say X- class) any better then the natural methods available, nor does it render forecasting the weather any better, or enhance predicting the behavior of atomic spectra in the presence of magnetic fields.

Thus, supernatural entities are redundant, hence OVER-extended to the realm of thought!

Religion is even worse! Religion takes basic beliefs then - even if the beliefs are minimal or innocuous- then makes them much more complicated and egregious. Just look at what the Roman Catholics did to basic spiritual approaches after they tossed in assorted "sexual" rules to do with "natural law"! They even argued, at one time, that slavery was justified under natural law because some men were "naturally" inferior to others and needed direction and guidance.

The evangelicals are no better. These whackos take basic simple, mistranslated words and later additions in their bibles (mainly from John, an original GNOSTIC Gospel) and turn them into litmus test for damnation to the rest of humanity! They also take a simple concept like "expiation" and contort into something never intended (by misapplying it), as a justification to dispatch those who are skeptical over it to Hell!

Such thinking and the recognition of religion's poisons, came to the fore in a recent Denver Post Sunday Column ('Losing My Religion') by Fordrena Griffith. Griffith begins by citing Fred Phelps and his Westboro Baptist Church of "extreme yet perfect examples of faith gone wrong". That is, when a sect or cultish group calls down hell and damnation on everyone else, for whatever reason. However, as she correctly points out, their invocation of biblical wrath is both false and unsupported.

She then relates her own experiences with a close friend who had an abortion. She writes that "prior the procedure I implored her to re-consider, using every religious, moral and ethical argument I could and championing the right to live of the hidden life within her"

She then writes the one thing that matters:

"Instead of offering her my compassion, I sacrificed her on the altar of my faith"

Exactly! In other words, Ms. Griffth's faith drove her to use her friend as an expeditious sacrifice to support her own ego and its extreme beliefs. Her friend became a casualty, or more likely collateral damage, of her OVERTHINKING and overweening judgmentalism.

Where if she'd just offered basic support and human compassion, things would have worked out differently. Instead, her friend rightly told her 'Hasta la vista!' as she was no longer prepared to put up with her holier- than thou sanctimonious and self righteous blather.

"My judgmental words saved no one. Nor did they lead her an inch closer to salvation. In fact, the only thing I did accomplish was the termination of our friendship and any future opportunity to be a positive influence.

I still lament the pain I caused my friend and others like her as I attempted in misguided ways to find god in a belief system contrary to the true message of Christ."

Now THERE is a rational Christian, who finally realized the extent to which she had over thought her faith and imposed its most extreme nonsense on others.

Had SHE not overthought, and instead minimized the supernaturalist bullshit, she might still have her close friend.

Something to think about, but not overthink!
Posted by Copernicus at 10:28 AM

I truly liked this blog and the column you referenced. That girl (Fedorena) has certainly shown that it is possible to over work the faith thing and end losing friends doing it. At the same time, the whole bunk about atheists over thinking is just so much crap.

Like you write, it is believers who over think because they introduce beings and realities that don't truly exist.

Way to go with this blog article!