Is The Earth Revolting Against Humanity? 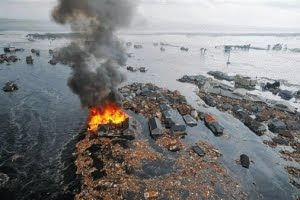 Scene of Japan ravaged by a tsunami in the wake of an 8.9 earthquake, the fifth largest ever recorded. 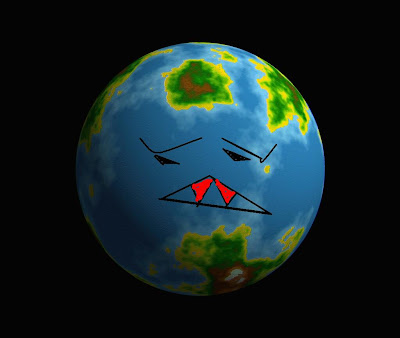 The massive 8.9 quake in Japan, with tsunami to match (and that tsunami now hurtling across the Pacific toward the west coast of the U.S.) brings to mind once more the Gaia theory of biologist James Lovelock. Basically, Lovelock postulated organisms ultimately coalescing into a unitary “super organism” of life, in association with the physical environment. In other words, the latter and the former can’t be willy-nilly divorced from each other. Instead there’s a constant dynamic feedback.

Ultimately, in Lovelock’s words, one ends up with a “self-regulating system made up from the totality of organisms, the surface rocks, and the oceans and the atmosphere tightly coupled as an evolving system”.

This planetary system he called “Gaia”.

How it actually works (and even whether it actually exists) has provoked a sometimes gnarly and contentious debate the past thirty years, since Lovelock first brought it to prominence. Despite the debates, or maybe because of them and the fact many issues were resolved, the Gaia theory has moved from the fringes of la-la land to the center of Earth systems science.
The critical question that remains is the nature of the self-regulation and the delineation of its limits- especially (for humans) what happens if those limits are breached.

Say you have a planet bearing trillions of living organisms and all is well so long as a certain equilibrium applies – say between those organisms and their inorganic support systems (surface rocks, atmosphere and oceans):

Organisms and Earth are in a balanced dynamic feedback. No more waste is generated (by the organisms) than can be absorbed or dispelled, and no excessive activities damage surface rock, oceans or atmosphere to the extent the effects rebound on the causal agents.

But what if one of the organisms say, over-reproduces and generates trillions of tons of toxic effluent that choke the oceans (robbing their life of oxygen) even while they pump CO2 into the atmosphere. Then the equilibrium and balance is disrupted so we see:

But to restore balance, might there be a hidden basis whereby one eventually gets?:

O< - E
Enter now Peter Ward of the University of Washington and his “Medea Hypothesis”. The essence of his hypothesis is that all living organisms and the de facto “super organism” (which includes human society) multiply until they reach environmental or other limits. Thus, they have the choice to diminish of their own accord, or destroy themselves. This has happened numerous times in natural history as part of the process of evolution.

Modern humans were nearly rendered extinct several times, with numbers once going down to barely 50,000. Now, we are spread in our billions across the planet. The biggest reactive change involving the planet began with the Industrial Revolution. Since then, humans have profoundly affected every facet of the planet …from Arctic sea ice levels, to melting glaciers, to occupying major subduction and Earthquake zones, even as they churn trillions of tons of carbon into the atmosphere each year.

The period called the Holocene ended after the last Ice age and gave way to the Anthropocene or human-dominated. This is more than mere words, as much current evidence points to the fact there is now so high a concentration of CO2 in the atmosphere no more Ice Ages can occur. The level seems to be predict to be somewhere between 450ppm and 500 ppm and the projections from European studies (ECHELON) disclose 545 ppm by 2050.
Meanwhile, as pointed out by Prof. Gale Christianson (‘Greenhouse’, ):
"there is no record of an ice age except when CO2 levels dropped below some 200 ppm. Thus, the Anthropocene will mark such domination of humanity that they will have stopped all future Ice ages. "

So what are the downsides? Again – in the numbers. Once the human numbers reach levels where the quality and chemistry of the air and oceans are degraded so that they can’t be used, we’re in trouble. Once irreplaceable resources are all gone, and it requires too much energy to access more, we can no longer clothe, house and maintain our selves. Once degradation of the soils reaches a phase we can’t grow enough food to feed everyone, billions will starve.

Meanwhile, pollution of the last watersheds via industrial waste and human contamination means we’ll either be forced to ingest low quality water – getting water-borne diseases, or perish from lack of water.

There are dozens of ways the planet has to indirectly get back at us, most of which entail denying us the resources and support systems needed to survive.

Currently, we can afford a modicum of optimism on our future, short term at least, because most of us don’t live long enough to really consume that much to inflict major harm. That would alter radically if life spans suddenly shot up to over 100 for the majority. Humanity would then become a pestilence on the planet and the Medean hypothesis would kick in to eliminate excess or surplus meaning those numbers that can’t be sustained by the existing resources.

Even if the numbers are downscaled, there isn’t a guarantee humans wouldn’t continue to be their own worst enemies. For example, as author Tom Flannery (Here on Earth) has pointed out, in almost every instance, human instinct for acquisition, fear of the unknown and preference for the easy way out have pushed things in the wrong direction.

Rather than invest more to develop alternative energy sources, we continue to go for the easy oil, but which is no longer so easy - so we must resort to deep ocean drilling and then risk catastrophes like the Deep Horizon off Louisiana last spring. Rather than develop seeds for more general use to feed more people, we allow industrial giants like Monsanto to develop genetic varieties and put patents on the seeds, enforcing them by designing them with an expiration date of one year. This is nuts! Then people talk of a planet being able to accommodate ten billion? They’re crazy!

As to what ought to happen next, Flannery notifies us there’s a long and depressing list of items under the header: ASAP. Worse, nearly all demand that we think differently, and even measure things differently to get the true costs. All this means putting market forces in the public interest, but is this even feasible when so many screech monkeys on the right will see any such tendencies as “socialism”?

All of this argues even more for an Oikonomian type of solution such as I already examined:

In the meantime, if we are to avoid a Medean-type collapse we will have to limit our numbers. That means starting off with no more tax breaks for those with kids. Make each family with more than one child pay an extra $1,000 a year instead, and in each country. (Unless the kids are adopted, since this removes the burden of caring for them from the state so parents should be rewarded. This will also encourage more people to adopt rather than generate their own – thereby increasing the CO2 producers)

The choice is ours, but I can’t help but recall Robert Ornstein’s book ‘New World-New Mind’ and how current humans fall so far short of the brain currently needed to process fully the existing problems and resolve them, to really avoid calamity.

If only we could speed up our own brain evolution! Interface with quantum computers perhaps?
Posted by Copernicus at 10:16 AM