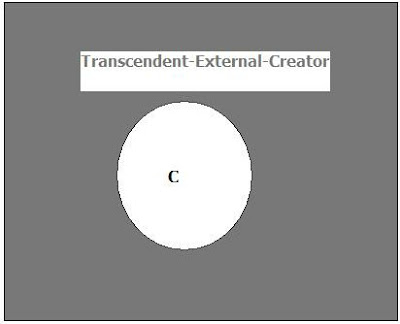 Fig. 1: If "creation" is denoted by the subset 'C' - and a transcendent "creator-God" by the external gray - then omnipresence cannot apply, since there is no divine presence in C.

Most attempted definitions or descriptions of "God" rest on metaphysical statements that are contradictory, as well as incomplete. In this installment I examine the difficulty posed when the human brain is confronted by the assumption of an ultimate reality – as given by a word – and then asked to define it.

The crux of the thematic and epistemological problem was probably first highlighted by Philosopher Joseph Campbell in his book, The Power of Myth (Anchor Books, p. 56) when he noted:

"'God' is an ambiguous word in our language because it appears to refer to something that is known. But the transcendent is unknowable and unknown. God is transcendent, finally, of anything like the name of "God". God is beyond names and forms."

What Campbell is insinuating here is that it's best not to append or project any sort of descriptions onto the presumed entity – especially "omni"- ultimate ones, like “omnipresent”, “omniscient”, “omnipotent’ etc.

This take is essentially endorsed by author James Byrne in his book, ‘GOD’. Byrne points out (p. 151):

"The idea of God as Being is the creation of the philosophical gaze, a result of the drive to objectification which is the hallmark of the history of metaphysics. It is the `God' which is argued about in theism and atheism, and which can only be a projection of humans"

The reason he avers that “GOD” is a projection of humans is because it doesn’t exist independently from human brains. (Which I showed last year, in a specific blog about ontological demonstrations). Because no human can comprehend it or show it, say like “a car”, or “a house”, then the human is left to impose his own verbal infrastructure which often turns out to be ludicrous.

Consider the assertion that “God is Omnipresent and transcendent”

As indicated by the diagram of Fig. 1 this statement results in a direct contradiction. For if the circle C defines “creation” (according to most orthodox religionists) and beyond (gray area) is “creator = God” – then the two are separate. Now, in this case the latter may be said to “transcend" the former, since it can't be simply identified with it, but then it’s no longer omnipresent – which means present EVERYWHERE: rocks, birds, trees, oceans, lions….even dog poop. Thus, a contradiction arises between the attributes “transcendent" and “omnipresent”. (Though a priest once argued with me that there can be such a thing as "differentially quantified omnipresence" - so the divine presence in humans will always be much much more than in dog poop. However, as I pointed out to him - if you differentially quantify the attribute you essentially limit it in specific domains - so in those domains since there is "less" of it, the attribute can be said to be diminished- or diminish. Again, a contradiction - but possibly a Level (4) truth statement contradiction)


According to Godel’s Incompleteness theorem(s) no statement forged out of an arithmetically-based system of axioms can yield a result free of contradiction. Because there is contradiction, all such systems are incomplete and their conclusions unproveable.

Let’s look at a simple, linguistic example of a system which prevents closure - or definition:

Consider the two statements in tandem:

“If God exists, the lower sentence is true.

- God doesn’t exist if the upper sentence is true”

This simple doublet yields an incomplete (circular or self-referential) result and so – based on it- the existence of God is unproveable in the system. There is no way, parsing the above statements, that one can arrive at either the result: “God exists” or “God doesn’t exist”.

Let’s now look at a similar impasse that is introduced by simply including “omnipresent” as an attribute of God in a metaphysical statement ABOUT God.

This may superficially sound plausible to an orthodox religionist- maybe a conservative evangelical, but that’s because he or she isn’t thinking carefully enough about the implications of the attribute. “Omnipresent” means what it states – not half present, not a quarter present, and not in some places or conditions – but in ALL. If one uses the term, one accedes to the meaning.

My contention is that – like the doublet statement – this is a statement of contradiction.

There are two parts to the statement:

The first equates “GOD” (G) with being omnipresent. If indeed omnipresence is a singular attribute and ONLY God can have it, then we essentially have an identity between the attribute and the entity. If then something exists and is omnipresent it must be GOD. (G = O). It cannot be anything else. (Which creates another problem for certain believers when they attribute so much ability- e.g. in temptation of billions- to "Satan" that the entity rivals "God" in omnipresence!)

The transactional statement G -> U -> H meanwhile implies an action, such that GOD (G) acts on the Unbeliever (U) to dispatch him or her to Hell (H)

The contradiction arises when one makes the appropriate substitution of G = O into the second statement so that:

But if Omnipresence now guides the transaction, all elements must be defined by it since there can be only one omnipresence.

It must be also true that:

In other words, omnipresence (of G) extends to the Unbeliever, and also to H (Hell)


Therefore IF the following statement is true:

“God condemns those who disbelieve in Him to Hell”

“God condemns himself to Hell – which is also Himself”

Religionists may decry this as some kind of devilish “trickery” but it isn’t. It is simply faithfully using the believer’s own claim that his deity is “omnipresent” and following that through to its logical conclusion in a specific statement frequently made by orthodox believers. If the believers don’t like it, then they need to ditch the attribute. (Which is exactly why thoughtful Christian believers are now reconsidering the Socinian deity)

Another pair of contradicting attributes are “omnipotent” and “omniscient”.

To give a simple illustration, if as mathematician Richard Dedekind once noted, God is omnipotent, then by virtue of that He’d be able to confect or manufacture a rock of infinite mass. However, by being omniscient, he’d already know that if he attempted to lift it, he’d use up all his infinite energy in doing so. Hence, being omnipotent contradicts omniscience. In this case, God’s omniscience prevents him from even attempting to make a rock of infinite mass and lifting it! (Because he knows in advance by doing so he’d lose an infinite amount of energy and would no longer be omnipotent)


Because of the mutually self- limiting nature of ultimate-omni attributes, author Byrne acknowledges all statements made by humans to do with God must be either incomplete or more often contradictory. Byrne thus endorses French philosopher Jean-Luc Marion's ploy of only writing 'God' with a strikethrough. Thereby to indicate no one has the capacity to describe, grasp, conceptualize or manipulate the underlying entity. In effect, as Byrne observes:

"to think -G-O-D- is unthinkable is to reject the entire basis of onto-theology."

If then the entity is so de-conceptualized, it can't be debated. (Or perhaps more accurately, such a debate will always prove fruitless or futile since incomplete definitions and contradictions will always emerge - one reason why giving necessary and sufficient conditions for existence may be preferable). Note, this is a different thing from being "beyond knowledge" as the agnostic would define it. It is rather, beyond any capacity for human thought at all!

Thus, while the agnostic can insist his position is one of "impossibility of knowledge" of God (or supernatural) this new category prohibits even writing anything. It is more productive and practical, as Byrne avers, to regard "God" (if one must invoke the noun at all) as a "regulative ideal". Such an ideal for human use does not necessarily preclude a transcendent Being, but does not require it either.
Addendum:
ON "God" as supernatual concept and hence trumping all logical associations, formulations.
This can only work IF the term is framed as a supernatural concept ab initio. What does this mean? As has been pointed out by Pascal Boyer (Ch. 2, ‘What Supernatural Concepts are like’, p. 51, in ‘Religion Explained: The Evolutionary Origins of Religious Thought’, Basic Books) “the information contained in key tags of the statement or concept must contradict information provided by the ontological category”. Therefore ALL terms used by supernatural extension, i.e. "force", "thought", "knowledge", "act" etc. must be set out so as to contradict the tag in a known (physical) ontological category. Thus, "supernatural force" must be shown to specifically contradict physical force (as given by Newton's 2nd law, F = ma) and be explained in depth to show its workability in a supernatural domain. This demand extends to "supernatual ethics" and why it (evidently) contradicts normative human ethical expectations.
Posted by Copernicus at 12:47 PM

First, what exactly do you mean by "omnipresence of trascendence"? It cannot be assumed this is clear! You may want to begin by first defining each of the terms because they may not mean the same thing to others.

"Omnipresence" in the literal physical (and temporal) sense actually would require a strictly inseparable cosmos, hence fulfilling all conditions pertinent to Bell's inequality and the Alain Aspect experiment. This presupposes quantization of matter, and of course, our experiments support this.

More to the point, what this means is that there can be NO omnipresnence inherent in non-quantized matter or cosmos since these would not fit with a nonlocal model.

As for "frame of reference" that is inapplicable anyway when writing about either "omnipresence" in the sense I used it, or transcendence in the sense of transcending the material state, say by attaining an immaterial, physical post-death state.

"Subtantiality" itself is relative, that is, to the level of resolution at which one observes matter. (at the quantal level everything is "insubstantial"). Space at the level of the quantum "foam" (Planck length) can't be said to be insubstantial because it is replete with vacuum energy.

You may wish to consult these other blogs before responding:

Perhaps the question you really need to be asking is: Can a deterministic theory with hidden variable φ reproduces Malus' law for a photon transmitted by two polarizers C and B, with arbitrarily chosen settings of their axes?