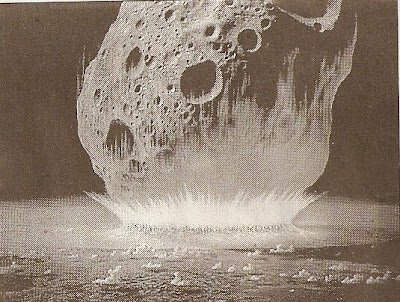 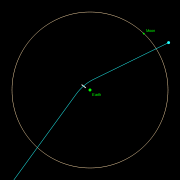 Fig. 2: The projected path of the asteroid Apophis in the year 2029 - registering a near miss.

As of this writing an asteroid named Apophis, roughly -one fifth of a mile long, may strike the Earth in the year 2036. Originally, according to standard celestial mechanics, it had a 1 in 37 probability of hitting the Earth in 2029. That was in 2004. By 2005 the forecast was for Apophis to intercept Earth just below the orbital altitude of most geo-synchronous satellites, or 22, 400 miles. This, of course, is essentially a "strike" given the numbers. However, the possibility of a direct hit remains on a further orbital pass, in 2036 - though the odds are now much more remote at 1 in 250,000.

Why do these figures and odds change? Mainly because certain features and aspects of the dynamics can change. One way, for example, is via the YORP effect - whereby incoming sunlight incident on the asteroid surface can generate thermal radiation absorbed (and reflected) which can affect the object's spin rate according to: dt = r x f dS where f is the force component, and dt the change in torque. (The surface element is dS). Theoretically, the alteration in spin rate could also affect (ever so slightly) its orbital parameters such as: inclination of orbit (to ecliptic - or the path of the Earth's orbit), longitude of the ascending node, and argument of the perihelion.

Of course the computations for long range orbital actions and possible interactions with other bodies aren't simple by any means. The primary complicating factor here is the shape of the asteroid. Thus, if one is to factor in the effects one must first resort to complicated mathematical procedures known as spherical harmonics- yielding functions of r(theta, phi). The calculations are quite complex but can be done numerically (say using computer modelling with different input parameters) as well as analytically. Generally, one would use Legendre polynomials of even orders and bear in mind the YORP term is a 2nd order effect. Ideally, at the end, one has some set of "shape coefficients" which can be substituted into the equations.

Note- I am NOT asserting the YORP effect has or will have some bearing on Apophis' future motion, only that it may figure into the future dynamics in some way - perhaps amplifying an existing perturbation. The order of magnitude is also somewhat small - based on analysis of other asteroids, such as the near Earth crosser, Apollo (computed at 3 x 10^-4 deg/day).

More germaine is the fact that the close approach of Apophis in 2029 will alter its future course and orbital dynamics, in effect making a future hit (or near hit) more likely. Hence, the jump in probability from near zero in 2029 to about 1 in a quarter million by 2036.

The Russians don't appear to be taking this too lightly, or dismissing the 1 in quarter million odds as not worth losing sleep over. Russian Space agency head Anatoly Perminov has informed Golos Rossii Radio that there would soon be a meeting to decide whether to launch a spacecraft to attempt to knock the asteroid out of its orbit following the 2029 encounter. According to Perminov, the asteroid will get closer on its next pass in any case, and may well hit the Earth in 2032. Since the orbital period is 323.59 days this is more than likely, if a particular orbital resonance is incited. (In an orbital resonance, the orbital period of one body, say Apophis, "locks" onto the the orbital period of another, in an integral ratio - say 2:3 )
Perminov in his own interview, essentially went so far as to disavow the NASA prediction of a miss in 2036 (well, they are the ones giving the odds at "1 in 250,000") and opted instead to accept the forescast of an unnamed scientist (probably Russian) who predicts it may well hit by 2032. Before we lambaste Perminov too hard, recall this is the same NASA that some years ago dispatched a spacecraft to land on Mars, but it missed it by a good bit (~ 3,000 mi.) because the engineers had failed to convert from metric to British (feet, feet per second) units.

The question remains of whether it is a good idea to try to knock Apophis off its orbital path post-2029. While the Russians may well assume that such an interception will leave Apophis further displaced from Earth - and hence less a threat, the opposite could also materialize and the original path may be re-aligned for a direct hit. Recent research suggesting "tubes" in space which can direct an asteroid (based on the theory of KAM tori) indicate this may well allow Apophis to "sneak" into an orbital "keyhole" and kayoe Earth!

How bad would a direct hit be? If in the ocean (most probably since oceans make up 70% of the Earth's surface), a tidal wave a quarter mile high would likely be incepted- assuming entry at 40,000 meters per second and Apophis' initial mass is preserved. If it occurred in the mid-Atlantic then most towns, cities and places along the U.S. east coast - from New York City south to Miami, would be washed off the map. If the object struck on land - say hitting Lake Okeechobee (see Fig. 1) the state of Florida would be essentially wiped off the map.

My own advice to the Russkies, for what it's worth, is maybe leave well enough alone. Or to put it another way, let "sleeping asteroids lie". At least until you have confirmatory data that such an intercept would be worth the risks and NASA's estimates are definitely off.
Posted by Copernicus at 11:21 AM