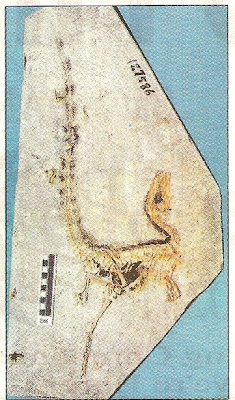 Fossil tale scale for the dinosaur Sinosauropteryx, and superposed image inside.

The just-reported discovery of fossilized tail feathers of a meat eating dinosaur found in China has created much interest, and excitement. No wonder! The dinosaur, named Sinosauropteryx, shows one of the dinosaur finds not connected evolutionarily to birds. It was actually around earlier than the emergence of birds, and is the most primitive feathered dinosaur. Likely also, it was unable to achieve flight because of the lack of aerodynamically enabled feathers. These would be feathers able to achieve lift by way of the well-known Bernoulli Principle.
See:
http://library.thinkquest.org/2819/bernoull.htm

The image shown (top) captures the creature (superposed in the tail scale) and its russet-hue. In addition, this dinosaur appears to have russet rings, according to a paper published in Wednesday's Nature journal. Most intriguing, the pigmentation of the 125-million year old dinosaur appears to exhibit the same internal cellular coloring agents as seen in the hair of red-headed humans.

The color itself did not show up on simple observation, but did once an electron microscope was applied, at which point the researchers (based at the University of Bristol, England) identified the specific cellular markers of color. Until this remarkable find, scientists have speculated on a wide range of colors for these prehistoric beasts - ranging from rich pastoral green, to ochre and brown. Not surprisingly, as the connection to birds came more and more to light, so did researchers' consciousness that color might be an evolutionary factor.

Is it feasible that Sinosauropteryx might have led to a line of wingless or other rudimentary-winged birds- incapable of flight? Perhaps, but a lot more investigation would be needed to make such a link - since right now the find appears to stand alone. In any event, if and when a bird evolution connection is made it will come through meticulous observations and testing of hypotheses - something the creationist religious believer will never do - which is why his committment is to a religion, not genuine science. If this were not so, then the creationist would subject his theories to falsification tests.

REAL Science - unlike religious beliefs - is the search for natural explanations in what we behold in the world around us. Central to this process is the construction of theories. Contrary to the uneducated depiction by fundies, theories are the most advanced embodiment of science - and indicate that sound predictions can be made, and most falsification tests have been passed. Religious or supernatural claims, by contrast, would never attempt anything so dangerous - since it might make the faithful think twice and question their faith.

That context presumes an approach to objective truth is by way of successive approximations, a concept that is totally alien to most religionists. It works like this:

You have data, and accessory information which leads to some initial result which tests a particular hypothesis- call it 'x'. You then acquire better data (perhaps because of refined instruments, techniques ) and are led to a modified (improved) result such that:

Religions - by contrast- simply impose their truth ab initio by fiat or decree, from some bible passage. There is no attempt whatever to incorporate any approximation, or to test claims made. Or to even acknowledge that 'truth' can't be accessed all at once. Rather, one must set rational truth aside and succumb to ‘faith”.
In their delusions the creationist crowd actuall believes their potshots at evolution - whether the (perceived) lack of transitional fossils, or the seeming absence of a "missing link" - forges a basis for creationist science or even arguments. In actuality, this is poppycock since most "arguments" for creationism aren't genuine arguments at all in the positive logical sense. They are just quibbles with evolutionary biology. For example, most of the sane and rational creationists will at least grant that evolution can occur on the small scale as with flu viruses or bacteria - they just won't allow it with dinosaurs, horses, humans etc.
But bottom line, they are simply whining about aspects of evolution - not manifesting their OWN full counter theory! (Which again, if they were, would have to be subjected to falsification)
Anyone who thinks this sort of blind faith is science, doesn't have the first clue about what real science is. And if they don't grasp successive approximations, they never will!
Posted by Copernicus at 9:01 AM