From calculus-based general physics (or classical mechanics) , the general equations for the center of mass of a 3D solid as a whole are given by:

The derivation, which will not be done here, is generally by adding the moments (for basic principles of moments see:

Of all the concentrated masses in all the volume elements  D V  and taking the limit as the  D V 's approach 0.

An interesting introductory problem for a planar 3D object, say a wafer-thin, homogeneous triangular plate with height h and base dimension b, is laid out as shown in the sketch of mind below: 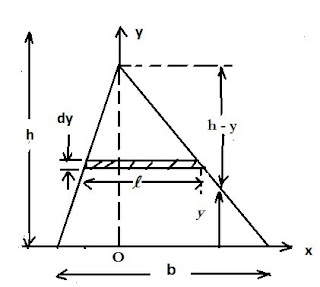 The basic procedure entails dividing the triangle into strips of width dy parallel to the x-axis. The mass of the strip then is approximately:

With  ℓ   the width of the triangle at the distance y above its base. Using similar triangles we get:

So the element of mass will be expressed:

For the entire plate we can then write for the y-coordinate of the center of mass:

Thus, the center of mass of the uniform triangular plate lies at a distance one third of the way toward the opposite vertex.

An interesting introductory problem  for a 3D object is to find the position of the center of mass for a uniform solid hemisphere – as shown in the graphic below. 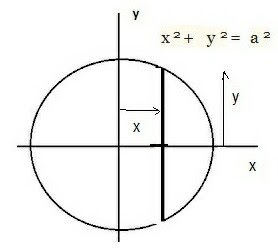 This is take to have a radius a, and a uniform density,r,  and we note the center of the plane face of the hemisphere is the origin.

The x-axis is perpendicular to this plane strip or face.  By symmetry the center of mass will lie on the x-axis.  We begin by considering an elemental strip of thickness  d x with its plane face perpendicular to the x-axis and distance x from the origin.  If its radius is given by y the volume of the disk is:

With the element of mass given by:

And so we can write for the x -coordinate of the center of mass for the elemental disk:

Suggested Problems:
1) A straight, thin rod PQ of length 2a of constant cross sectional area A is of variable density, r.

Given r  = ro (1 + 2x 2 / a 2)  where x is the distance along the rod from the end of P and ro  is a constant.  Find the position of the center of mass.
2) Find the center of mass of a solid hemisphere of radius r if the density at any point P is proportional to the distance of P from the base of the hemisphere.  (Hint:  Add another lower latitutde layer to the upper latitude circle below to form a thin slice of thickness dy.  Then imagine the whole hemisphere cut into slices of thickness dy, i.e. by planes perpendicular to the y-axis) 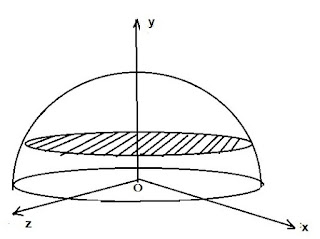