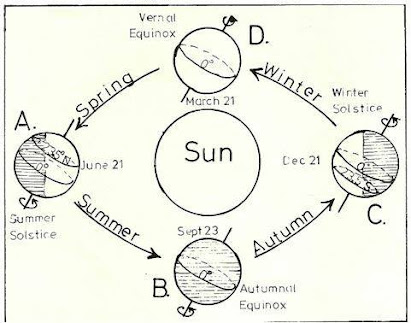 Today is  the first day of summer, when the Earth reaches the summer solstice in its orbit (see diagram above) and after today - the longest day - the days will now get progressively shorter, by about 4 minutes per day each day.

It is astounding and kind of ironic that too many (who likely never had exposure to basic astronomy ) fail to realize the days actually get progressively shorter over the summer.  Reference to the above diagram can help to clarify this, namely for the northern hemisphere

1) The shortest day of the year is at the winter solstice (Dec. 22-23)2) The longest day of the year occurs at the summer solstice (June 21-22)Let's examine this in a bit more detail, paying attention to the proportion of northern hemisphere solar exposure between points A and C. At point A in the diagram, we have the commencement of summer in the northern hemisphere (summer solstice) because the Earth's axis is tilted toward the Sun hence the N. hemisphere receives more direct sunlight, radiation. Also at point A, we have the longest day.Summer lasts up to point B which marks the autumnal equinox,  but during this interval the length of day is continually growing shorter.  Again, the proportion of N. hemisphere area exposed to the Sun continually decreases which means from point A onwards the days continually grow shorter. The N. hemisphere observer notes the Sun's altitude in the sky is becoming lower and its path across the sky (diurnal circle) less.This extends to point C, or the winter solstice, which marks both the shortest day (again for the N. hemisphere) and the beginning of winter. Note the tilt of the Earth's axis is away from the Sun, indicating less direct solar heat, radiation - while the S. hemisphere now receives more - hence it is now summer in that hemisphere.The winter season extends from point C to point D, with the day lengths now increasing all the while, until the vernal equinox is reached around or about March 21, the first day of Spring. Spring then extends from March 21 to the summer solstice, with the length of days increasing further as the observer notes the  Sun now gains greater altitude in the sky, and thus longer diurnal circles (as it approaches the summer solstice (A).)In summary then, the tilt of the Earth modulates the extent or the amount of sunlight-radiation (including heat) a hemisphere receives at a particular time, or over a given interval. Onset of winter and summer are defined respectively by the extreme axial tilts of  either "fully away" from the Sun, and "fully toward", while Fall, Spring are defined by neutral tilts - i.e.  neither away nor directly toward.The main takeaway? Days grow shorter during the summer - they grow longer beginning with the winter solstice (Dec. 22-23) and extending to the summer solstice.
Posted by Copernicus at 7:00 AM