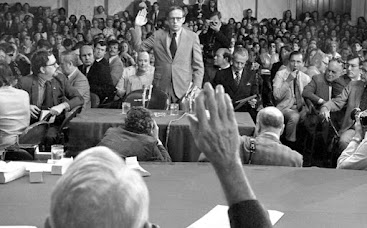 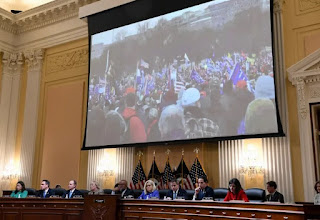 Scene from January 6th Committee hearings with video of insurrectionists

"The country was riveted. People watched at work, in department stores — any place they could find a television, all to watch former White House Counsel John Dean testify"  - Account from Washington Post on Watergate Hearings in June, 1973

June, 1973, and after serving my first two years in the Peace Corps I was eligible for extended leave of one month, which I took in Miami. Staying there with my youngest brother, Mike, who had just left the Marine Corps.  My good fortune at the time (as a political junkie)  was to land shortly after the Watergate Hearings had begun, and especially good fortune to see and hear former White House counsel John Dean's bombshell testimony.   This is what most political observers believe most helped sink Richard Nixon's presidency.  The above description in The Washington Post fairly well summarizes how the nation was riveted to the proceedings. Eyeballs glued to whatever tube was nearest.

Some of Dean's testimony that I actually watched can also be seen in the videos below:

But that was a different era from today. The nation was still relatively sane then, even as the war in Vietnam wound down.  The key was a more unified media landscape, as opposed to being balkanized into dozens of  'personal choice' venues today.  Especially when one major network (FOX) had the audacity and irresponsibility to totally ignore televising the prime time House January 6th Committee hearings- which John Dean himself has called much bigger than Watergate.  And given four events have been ranked at the top of getting Americans' collective attention: JFK assassination, 9/11, Watergate and the Jan. 6 insurrection - this is nothing short of a media atrocity. It serves only to further polarize and fracture the nation and FOX ought to have been fined by the FCC for pre-meditated malpractice.

If I had to put into context the current January 6th hearings, the first of which I watched last night with Janice, I'd have to summarize by saying "like the Watergate hearings  in 1973 but with a very powerful twist."  How so?  Well, imagine first that part of the Watergate hearings - which opened in May of 1973, showed actual film clips of the Watergate burglars breaking into the Watergate complex in June, 1972 - setting Nixon's downfall in motion.  That would be analogous to the actual video scenes of the violent mob of insurrectionists (not "rioters") assaulting the Capitol on January 6th.

Then imagine also Tricia Nixon delivering testimony about her daddy lying his ass off, like the clip of Ivanka Trump shown last night for the opening January 6th hearing.  Admitting she agreed with former AG Bill Barr's take that Trump's claim of a stolen election was "bullshit"

So in those respects, the start of the January 6th committee hearings had all the power and potency of the Watergate hearings, except these have to do with the attempted overthrow of our government - not merely corrupting it for one president's ends.   What was most powerful for me were the actual voice or video testimony clips of the traitor Trump's staff showing how he didn't lift a finger to call his dogs off, so he could watch it all on a big TV.

Worse, the scenes and testimony delivered also showed conclusively it wasn't just a "gathering" where people suddenly went ape shit, lost control.  Oh no! There were two distinct venues: the Ellipse where Trump was exciting the mob of thousands into a frenzy near noon on January 6th, but then much earlier - 10:30 a.m. - the Proud Boys, nearly 300, gathering at the Capitol to be the "spear" of the vanguard for the assault. So it was clearly a planned attack on the Capitol, with the Proud Boys used to initiate the breach so that the violent mob could then follow - beat Capitol police with flag poles as they bear -sprayed them.  All this while other first line defenders (like Caroline Edwards) slipped on the blood of fellow officers as they tried to halt the invasion.  And as Vice chair Liz Cheney correctly put it:

"President Trump summoned the mob, assembled the mob and lit the flame of this attack."

It was searing footage and testimony, and as I watched it thought it might be too much for a nation already besieged by a pandemic, soaring inflation and propaganda that allows one network to minimize the events with impunity. Such as the asswipe Tucker Carlson insisting it was no biggie given only five were really killed "not the seven claimed by the left, since two officers died by their own hand."  Yeah, you POS, after they were assaulted and bear-sprayed.

But this is also what is different about the current hearings: that a disaffected one -third of the nation, brainwashed and propagandized by a faction of traitors and miscreants (a cult masquerading as a political party)  could believe it's all a "show" or set up to try to help the Democrats in the midterms.  That is the sorry pass we've come to as a nation, that we cannot even be united in our collective perception of wrongdoing, seditious conspiracy and outright treason.

A June 8th NY Times column by Charles Blow  might best explain what we face as a nation now:  a kind of awful zombie-like numbing and indifference. It has resulted from all the exposure to the news of the mass death from the pandemic (now over 1 million) as well as the mass shootings, especially the Uvalde massacre.  Blow informs us that he sought the advice, input of a University of Oregon psychology professor - Paul Slovic.

Slovic has basically argued that a kind of mass numbness or indifference has set in where people have become "numb to the revelations", like about the bloody mass shootings.   But that also includes the revelations about the insurrection. In Prof. Slovic's words:

“We’ve seen and heard these stories, and after a while they become familiar, and when they become familiar they lose their impact.  The Familiarity leads to a form of normalization, and this is all only further complicated by the politicization of information."

Which is a damned shame, because it means too many millions will tune out right when they need to tune in and get their brains geared up to defend our democracy.  As Blow also writes:

"Trump has broken so many norms, traditions, laws and rules that the incessancy of it has become unremarkable and acceptable."

What Blow is basically asserting is that Trump has not only fucked the Constitutional framework of our nation, but the minds of our people as well - millions of them. Ripping their moral compasses to shreds as his minions - such as at Trump TV - aid and abet the mental paranoia and pathology with their lies, bunkum, and conspiracy ideations.  The barometer of our destruction ultimately will be how many believe these words are histrionic or hysterical as they lapse back into their comfortable fairy -tale world. Or worse, believe the toxic swill that the January 6th hearings are merely a "show" put on by the Democrats and a couple "traitors" (Adam Kinzinger and Liz Cheney) to defame one political party and win in the midterms.

Using the latter as a basis, count each percentage point gain of such believers (say in polling)  as one full percentage for the probability that this country will be a full autocracy by January 20, 2025.  And you can kiss this latest continuous experiment in democracy 'goodbye'.  People- Americans - also need to jettison this B.S. that "it's all in the past we need to move on." No! As John Dickerson noted on CBS this morning: "It's not just about January 6th. Even before that Trump tried everything to overturn a free and fair election. If you don't accept the peaceful transition of power than you do not accept the American system of government."

In other words, people cannot and must not accept that Trump's traitorous actions were merely a simple divergence from norms.  Or that the Republican cult - which adamantly defends those actions now- is a genuine political party. No the GOP is not. It is an enabling traitor, minority faction whose re-insertion into power - because of careless, discouraged or stupid voters-  will spell the end of this nation as a democratic Republic.

"Most Americans would like to know more about the events of that horrible January day, to have a serious national debate, and to ensure it never happens again. But this committee isn’t a credible messenger."

But she's not in possession of her faculties.  The Reeps under Kevin McCarthy had every chance to put up responsible members of the House Committee, but chose to nominate trolls instead, like Jim Jordan, e.g.

Twits who would only serve to distract and destroy the investigation and hearings from within. Delivering a genuinely non-credible vehicle, especially as Jordan was in contact with Trump - collaborating on who knows what- the day of the debacle. Which mockery is exactly what the Reeps want in their efforts to whitewash the atrocity that transpired on January 6th, 2021.

For myself, I will await the next committee hearings to be televised Monday morning at 10:00 a.m. eastern daylight time. 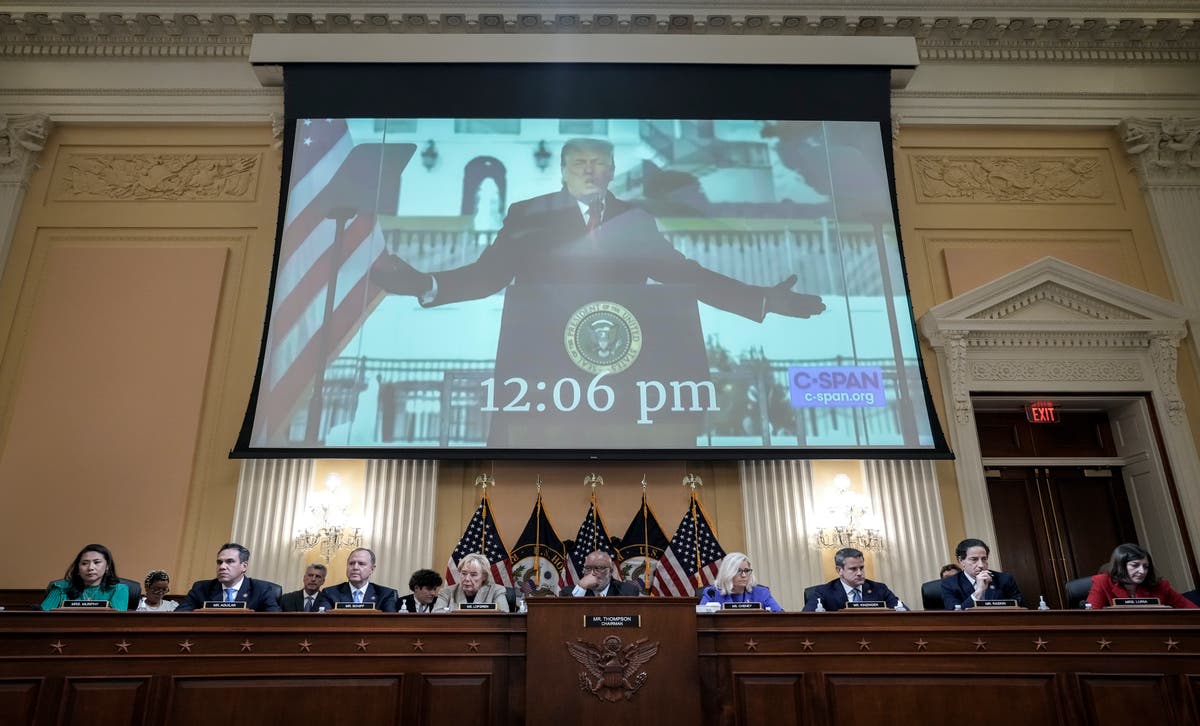 Fox News made headlines earlier this week with the announcement that they would be the only network to not provide live coverage of the House Jan. 6 committee hearing, but instead would “cover the hearings as news warrants.” Which meant an uninterrupted Tucker Carlson and Sean Hannity—they had no commercial breaks—providing a full-throated defense of Donald Trump. They brought in a pack of lying grifters to help, as The Washington Post’s Philip Bump called them, the “who’s who of the Carlsonverse.” Carlson made clear early on what to expect.

“The whole thing is insulting. In fact, it’s deranged,” Carlson said. “And we’re not playing along. This is the only hour on an American news channel that will not be carrying their propaganda live. They are lying, and we’re not going to help them do it.” By which he meant they were not showing the reality of that horrific day. Literally. An NBC News producer captured what Fox was doing in this clip:

That, as Philip Bump says, is far worse than just ignoring the hearing. It, as usual, presented an alternate reality in which nefarious Democrats were pushing propaganda to distract the nation. "Look over here, not over there," Carlson said. "Gas is over five bucks. Inflation is higher than it's been in the lifetime of most Americans. Violent crime is making cities impossible to live in, and more than one hundred thousand Americans ODed on drugs last year. Why isn't there a prime time hearing about any of that?"

Which tells you precisely what was going on here. Carlson, Hannity, and the entire network are functioning as the propaganda arm of the MAGA/GOP, and Republicans like Mike Lee are enthusiastically on board. They’re going to present a flurry of conspiracy theories and lies as their rebuttal against the very real news that was presented Thursday night, and that is coming in the days ahead.

Donald Trump | Liz Cheney
Liz Cheney to GOP and America: Trump Did It, and We’re Coming for Him 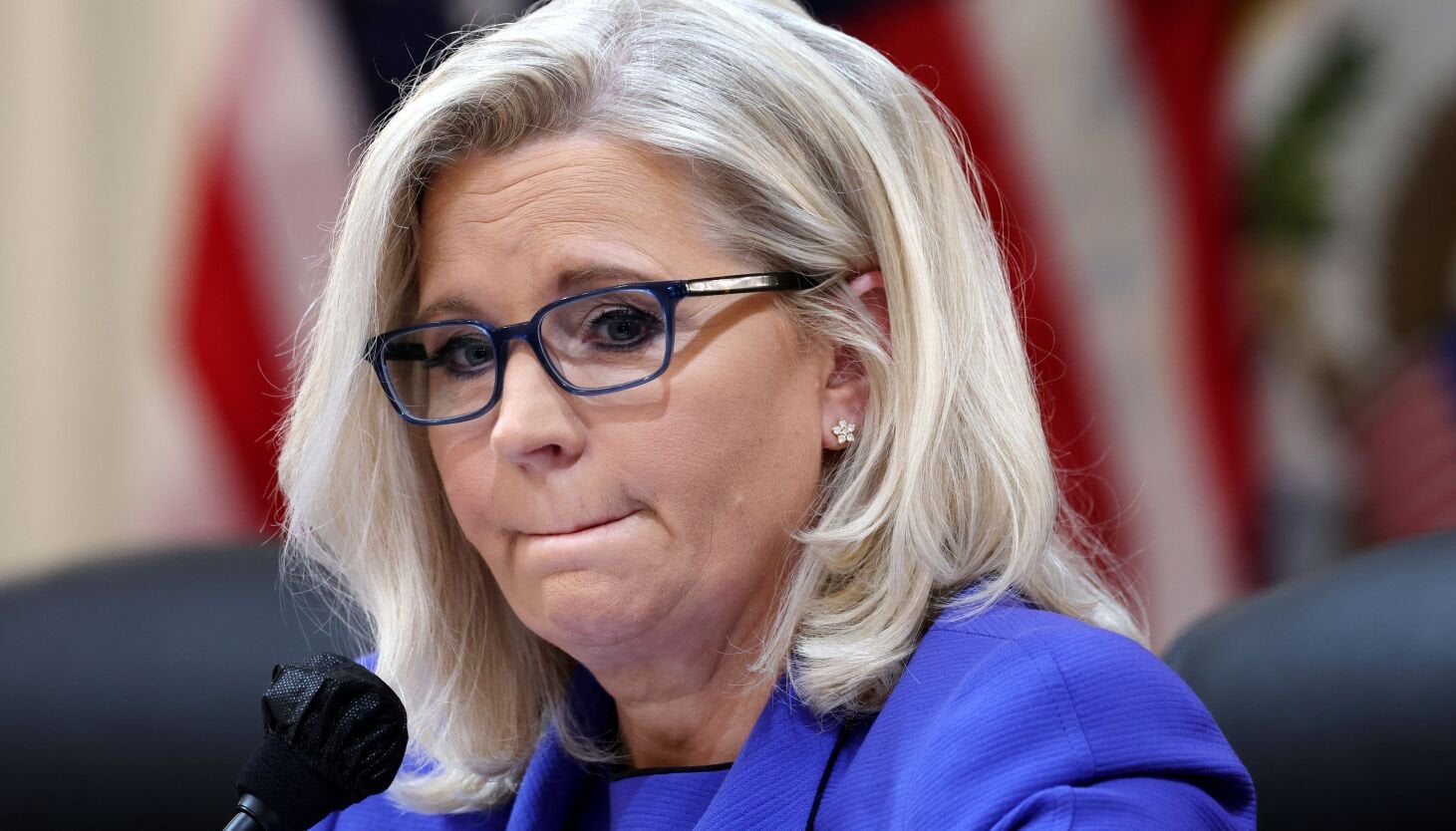 Thursday night's public hearing by the House Jan. 6 committee made one thing very clear: Donald Trump is personally in the crosshairs. They are coming for him with receipts, in the form of testimony from some of his closest aides and allies. The committee seems prepared to destroy any pretense that Trump was a casual bystander to the insurrection. In fact, its members are building a case that he actively encouraged it, and that by refusing to take action for many hours that day, he was an actual accomplice.

In trying to prebut Jan. 6 committee, McCarthy reinforces its utility

Liz Cheney got her chance to rebut her dishonorable peers. She didn't miss. 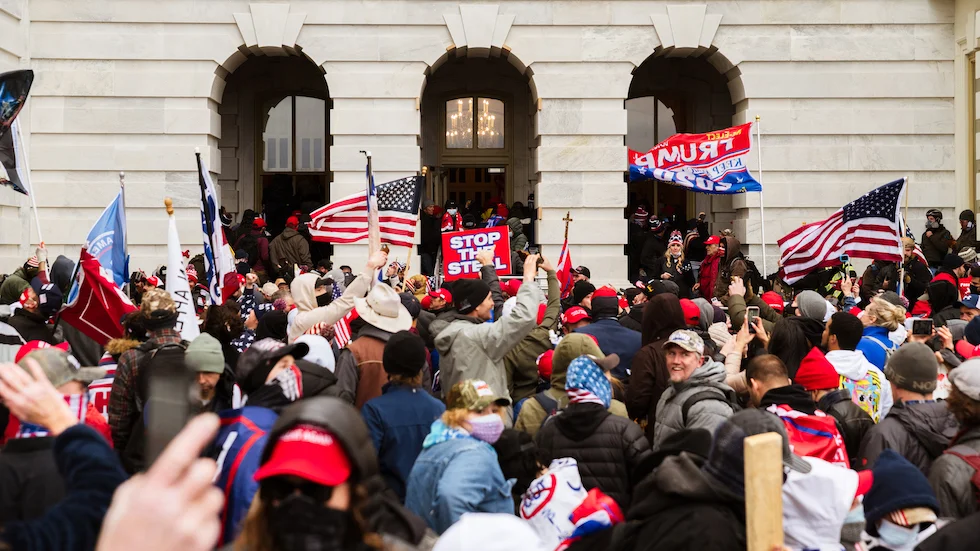