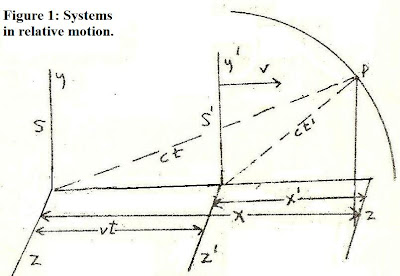 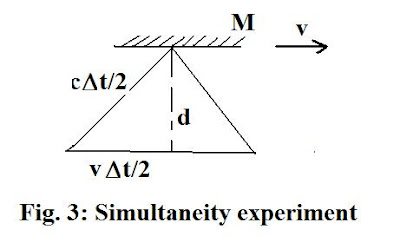 Let’s now consider the implications of the Lorentz-Einstein transformation and refer again to the original diagram (Fig. 1). Recall:

Suppose there’s a clock located in system S’ and an observer in system S sees this clock moving with velocity v. At any time t, the position of the clock with reference to the S –observer’s system is given by x = vt. If the length of time between two ticks is of this clock is T’ in the S’ system, the transformation to the S system (assuming x’ = 0) makes the time interval T appear to be:

This is a paradoxical result but one which can’t be escaped if we carry special relativity to its logical conclusion as Einstein did. So long as the two systems have a constant relative motion, we cannot say that one is moving and the other standing still, or that one’s clock is moving slowly and the other quickly.

A number of subtle consequences arise out of this. For one thing, the notion of simultaneous events, i.e. for observers in two different reference frames, is no longer tenable. Einstein, in fact, seems to have been the first human being to recognize that simultaneity between two events is a provincial illusion. In his landmark (1905) paper on special relativity (“Does the Inertia of a Body Depend on Its Energy Content?’) he remarked:

“We have to take into account that all our judgments in which time plays a part are always judgments of simultaneous events. If, for instance, I say ‘That train arrives here at 7 o’clock’ I mean something like this: ‘The pointing of the small hand of my watch to seven o’clock and the arrival of the train are simultaneous events.”

Einstein agreed that observing such simultaneity was a reasonably accurate way for a person holding a watch to tell the time of an event happening next to the watch, but insisted that on principle the method couldn’t be relied upon for timing an event far away from the watch, especially by someone moving in relation to the other things involved.

As an illustrative example, consider Fig.2 which features an enormously long train (defined as system S’) with an observer ‘Bob’ at its very center. (E.g. if the total length of the train is L, he is at L/2).

Two bolts of lightning then strike the extremities of the train, and do so simultaneously according to Bob’s watch. Bill, however, is situated on a stationary platform as shown – defined in system S- at the exact midpoint between the strikes and swears that he recorded the rear flash a sizeable fraction of a second earlier than the forward flash.

Who is correct? A non-relativistic thinker would undoubtedly incline towards the view of Bill, the stationary observer. The argument here is that Bob’s simultaneity is only apparent, not actual since the train would have carried him closer to the forward flash by the time he received their simultaneous light from points that were, by then, no longer equidistant from him.

For a relativist, however, it is just as true to say the train was standing still and the ground sped by it, so the ground observer (Bill) could have been carried beyond the equidistant point as easily as Bob.

In Einstein’s cosmic viewpoint, the lightning flashes (and their midpoint) are free to be considered an integral part of the train OR Earth, OR any other frame of reference. Each and every observer may select his own viewpoint. Any viewpoint is true and right, none is wrong. This example embodies the essence of relativity, that is, that time is truly relative and not absolute as had believed.

As an illustration of a type of experiment that attempts to reckon simultaneity, consider Fig. 3.

Here a light pulse is directed at a moving mirror M traveling with velocity v to the right. By the time the pulse reaches the mirror it has moved a distance D =  v (D t)/2 horizontally.

According to an outside observer, if light is to hit the mirror it must depart at an angle to the vertical as shown.

By Pythagoras’ theorem (square of the hypoteneuse equals the sum of the squares of the other 2 sides):

We call delta t’ the “proper time” or that time interval between two events as measured by an observer who sees the events at the same place. It’s always the time measured by a single clock at rest in the frame.

We note that the time measurement taken in the inertial frame is the proper time, and this is t' = 3.0 s.

Then we need to obtain t, for which:


1) With what speed would a clock have to be moving to run at a rate that is one half the rate of a clock at rest?

3) A muon formed high in the Earth's atmosphere travels at v = 0.99c for a distance of 4.6 km before it decays into an electron, a neutrino and an anti-neutrino.

a) How long does the muon survive as measured in its rest frame?

b) How far does the muon travel as measured in its frame?

Posted by Copernicus at 9:52 PM