New Research Into The 'Slow' Solar Wind Sheds Light On Its Source.

The solar wind is a  1, 610,000 km/h stream of charged particles constantly emitted by the Sun in all directions. However, solar wind dynamics are maddeningly complex as the original contributors to the Solar-Terrestrial Predictions Workshop held in Meudon, France (1986) learned.

For example, fast solar wind can attain speeds in excess of 500 km/s and emerges from coronal holes. These latter comprise dark holes visible in coronal imagery indicating where the Sun's magnetic field lines open up and extend into space thereby providing an escape channel for hot solar plasma. In the coronal image below these holes, as well as magnetic field arches, can clearly be seen: 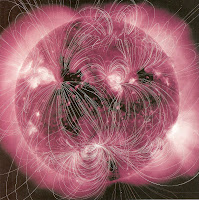 This fast solar wind  is differentiated from the much slower moving stream of solar wind that floods the solar system continuously, and defines the "slow wind". It defines what we call the heliosphere which is essentially the solar wind's" bubble of influence.

The heliosheath occurs at the far edge of the heliosphere. More technically, it occurs between the "termination shock" and the "heliopause".

Thus, it marks a boundary at the edge of solar system space. In May 2005, NASA announced that Voyager 1 had crossed the termination shock and entered the heliosheath in December 2004, at a distance of 94 AU.

While we can tie the fast solar wind to coronal holes, the origin of the slow solar wind has proven far more difficult to untangle.  One way to possibly resolve the issue is to examine data from the slow wind  intercepted by several near Earth spacecraft.


In fact, this has been reported now by Kepko et al (Geophysical Research Letters, 2016)  see e.g.

Thereby, Kepko et al discovered that the charge state and composition properties of the slow solar wind oscillate in nonrandom patterns. The oscillations occurred between patterns more typical of fast solar wind and more typical of slow wind. Specifically, the proton (H+) density within the plasma was three times higher at the midpoint of the cycle before decreasing. Meanwhile, the helium, carbon and oxygen abundances peaked late in the 90 minute cycle.

This pattern of oscillation indicated the charge state and composition of the slow wind originate in the solar atmosphere itself, not in transit from the surface. How can this be? Well, only magnetic reconnection at the solar surface could cause the solar wind to alternate properties characteristic of both fast and slow aspects. In other words, what we have is strong evidence for a magnetically-driven slow wind source with the potential to overturn previous models. As the authors put it (op. cit.):

This result has far-reaching implications for understanding slow wind origin. First, it rules out all quasi-steady models such as the expansion factor. In the quasi-steady models the solar wind plasma properties in any flux tube are set by the geometry of the flux tube in the corona, which determines the heating and momentum deposition along that flux tube."

In the above quote what Kepko et al are referring to are the "expansion factor" wind models that predict the slow wind issues from the tube like stretches of space containing the solar magnetic field as it peels off into space away from the Sun at the edges of coronal holes. Thus, the authors' model offers instead strong evidence for a magnetically driven slow wind source..

Why is it important which model is correct? Because we will then  be able to more accurately forecast solar wind phenomena including the occurrence of magnetic substorms at Earth's magnetophere.  In effect, we would be better able to protect infrastructure, including power grids on Earth, from the vagaries of space weather.
Posted by Copernicus at 8:31 AM