Black Holes - Where There Is No Space 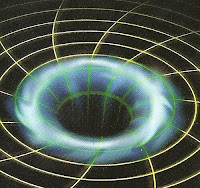 It seems incomprehensible, and more than a few people are unable to get their heads around it, but there are astronomical objects where space does not exist. Let me rephrase that by saying the space is not that which is conformal space-time that can support the laws of physics. Since the space  literally occupies a one-dimensional point at the hole's singularity, and an infinitely small point is occupied by a collapsed, stellar scale mass, then the laws of physics (which incorporate causality) do not apply.

where G is the Newtonian gravitational constant, c is the speed of light in vacuo, and M is the gravitating mass. Once a stellar remnant collapses within this radius, light cannot escape and the object is no longer visible, hence effectively "air tight" to use the words of the article. It is a characteristic radius associated with every mass of macroscopic scale

Such is the case with the stellar- collapsed black hole., but we need to explore the specific conditions for the zero space singularity in more detail. It depends really on a spherically symmetric solution    (Kurt Schwarzschild's  solution)  of Einstein's general relativity field equations, viz.

Where r, q,  φ  are spherical coordinates, for this conventional Schwarzschild metric..

As noted by Ciufolini and Wheeler ('Gravitation and Inertia', Princeton University Press, p. 69), for the above defined Schwarzschild metric the r = 2M region is a "mere coordinate singularity".  However, they note that the r = 0 region (where g00   = - g11  referring to the Einstein field potentials). is "a true geometrical singularity". In other words, expressing a region of no causality-based space time that we recognize. Of course, there are many different solutions, among which we find those well -behaved. The authors point out a specific example on p. 67 where "it is possible to extend analytically the Schwarzschild  solution to cover the whole Schwarzschild  geometry."

To fix ideas, reference is then made to a diagram on p. 66 showing an "Einstein -Rosen Bridge" or "wormhole connecting two regions in one Euclidean space."   It is emphasized that the sequence of diagrams (Fig. 2,9a, 2.9b, 2.9 c) denote "alternative interpretations of the three-dimensional maximally extended metric of Kruskal at time t' = 0"  For those interested, this referenced metric is given as (p. 67):

This is after transformation of the original Schwarzschild metric using the Kruskal -Szekeres coordinates given at the top of page 67.

The point is that a suitable mathematical approach can be used where one avoids a "spaceless" (e.g. true singularity) outcome, and instead engenders one with a space-time "escape hatch" - the Einstein-Rosen Bridge.

Obviously, in this post, many details are being left out including for the wide array of divergent black hole conditions (e.g. for angular momentum, rotation - rotating or not) and geometry, e.g. for Kerr black holes, see e.g.

I only touch the bare surface here to encourage readers to investigate many more aspects on their own.

Granted, no one has ever seen a black hole but we know how to recognize the physical evidence for its existence: very powerful and periodic bursts of x-rays, registered on sensitive satellite detectors. Mathematically, the very brief periods of less than a millisecond betray an extremely compact volume. The x-rays indicate accretion to a large mass. Together, these can be matched to predictions given in the Einstein general relativity equations and Voila! the black hole emerges as an object consistent with the observations.

In general black hole identification is predicated upon observing its effects as a member of a binary (double) star system. Thereby, the black hole presence is inferred from x-rays given off when the companion star’s gaseous layers are sucked into it. As those accreting gaseous layers are pulled through the hole's event horizon, they are condensed and the impacting plasma leads to intense heating and x-rays.

The most convincing recent find which puts the question of black holes existence to rest once and for all has been via the Laser Interferometer Gravitational Wave Observatory (LIGO). e.g.


The recent LIGO detection provides the first direct evidence for gravitational waves but also opens the door to using them to study the powerful cosmic events that create them, in this case two colliding black holes. Based on the paper cited in the above link, the two black holes are  each roughly 30 times the mass of the Sun. They evidently merged some 1.3 billion light years from Earth. The  gravitational waves themselves were generated in the final moments before the black holes merged. The signal was brief but definitive and we on Earth have now received it.

It is in fact the most direct observation for black holes ever made.

Meanwhile, the total current assay of black holes may be dramatically underestimated. This is a result of difficulty of detection, as is the case with all forms of dark matter. Despite that, the research thrust goes on, along with black hole identifications in a variety of formats and scenarios.

Those who want to investigate more, can consult any or all of this sampling of research papers, from The Astrophysical Journal, on the American Astronomical Society website:

Dozens and dozens of other papers are also available, which show in concert that the black hole is no mere macguffin created by some math genius fantasizing in his parents' basement, but a valid object of inquiry worthy of serious scientific investigation.

Anything new on quasars and black holes?

According to an article, 'What Links Galaxies and Black Holes?', in the latest ASTRONOMY (November, p. 46), supermassive black holes are the key to understanding quasars. As noted therein:

Add in to that the fact we now know quasars occur at galaxy centers and one is led to supermassive black holes as the generators. It was Cambridge University's Donald Linden-Bell, for example, who first noted the nuclear reactions that power stars would be insufficient to power quasars. That is, unless there was ten times more energy available via gravitational contraction.

After years of competing theories, astronomers have "finally settled on supermassive black holes.

The most compelling observations to support the above are "compact knots in galaxy jets that appear to move outward at ten times the speed of light". (Actually an illusion when the jets point directly in our line of sight). They *appear* to move so fast because "they almost keep up with the light they emit".

By the 1980s astronomers were convinced that supermassive black holes with masses of millions to billions of Suns are powering quasars.