It appears these days as if every manner of political elitist and his pet poodle have sage advice for working class whites. We saw it 4 years ago with the book 'Coming Apart: The State Of White America  1960-2010'  by Charles Murray. Therein he expressed the conviction that an over reliance on government "entitlements" coupled with an inability to get married or stay married caused this demographic to be on a downward spiral into indolence, moral laxity and even moral turpitude.

Not long after there appeared an odious, self-serving 'Lexington' essay in The Economist  channeling Murray's view incorporating the moral opprobrium directed at the same working class. He wrote in part:

"Most in need of instruction is a new lower class, perhaps a fifth of the white population whose plight forms the next part of his book. This class is in the throes of disintegration. Too many of its men will not work, too many of its women raise children out of wedlock, religious worship is in decline... In lower class neighborhoods the togetherness of communities has vanished...."

Okay, let's back up there. This needs an objective examination as opposed to semi-adorational slobbering in the form of a quasi book review. Let's begin with the last, that "lower class neighborhoods have lost togetherness". This very malady in fact, was addressed as long ago as 1995 by Charles Reich in his book, Opposing the System. As Reich noted therein, p. 103:

"When society itself comes to be modeled on economic and organizational principles, all of the forces that bind people together are torn apart in the struggle for survival. Community is destroyed because we are no longer 'in this together' because everyone is a threat to everyone else."

Note especially the highlighted part. We are no longer in this "together". Again, the crime or sin or whatever you wish to call it that Lex and Murray appear to want to hang on the lower classes is in actuality a direct effect of the Pareto-optimality based economic system which destroys equality and cooperation. It enables banks to foreclose homes at will (robo-closings) and thereby fractures neighbors one from the other. It rewards those who are prepared to game the system, but not those are aren't.

In such a capitalist-driven, consumerist, Pareto-organizational economic model, wherein the resource “pie” for the non-wealthy grows ever smaller, the young are threats to us oldsters, as we are threats to them, as neighbor is to neighbor. It can't be otherwise. For example, as threats to our Social Security are ramped up on account of the odious austerity-debt hawks - led by billionaire pricks such as Peter G. Peterson, we oldsters tend to pull back in self-interest and vote ardently against any increase in property taxes to support schools. While we would dearly love to support local schools via higher taxes, we are wary so long as threats exist to cut our benefits and standards of living to the point we need to turn our furnaces off to save money, or split our meds.

And at the forlorn bottom each manjack believes the "other" - his neighbor, to be his enemy as opposed to the savage debased system that spawned such inequities. How irreligious or anti-religious can one get?  In truth, the working class whites could begin by telling these wine and brie eaters that if they want them to marry then fucking provide a LIVING wage, not a mere minimum wage, to enable that to happen. Also, cease sending the highest paying jobs overseas to low wage bastions, including coding jobs, software development. They'd tell them to also provide - parting with some of their ill gotten millions or billions - some free child care services such as exist in Denmark and Norway.

Now, in his NY Times (Sunday Review, June 26, p. 8) essay ('When Paranoia Replaces Piety') , J.D. Vance would have us believe it is insufficient piety and religion. He writes:

"Despite benefits (less racial prejudice, more community, fewer divorces) church attendance has fallen off substantially among members of the white working class.in recent years just when they need it the most".

He then goes on to cite stats to support the position that this class, by losing its church-forged piety, has fallen into the pit of paranoia including political, e.g. "evolution is a lie secular science tells to counter the biblical story of revelation, the Federal Reserve achieves satanic ends by manipulating the world's money supply " etc.

Because of this these whites have become "wolves" as opposed to "shepherds" raising their kids. Hence, no surprise the kids come from broken families, use heroin or opoids, and suffer from neglectful or abusive parents".

But is this really true, or might it be the case that even with church attendance these whites would still have come out on the wrong side? Hardly! Because at root, in nations where the working classes are most ground under there is actually the flight to religiosity in order to escape economic hardship and horrors visited every day. Don't take my word, just look at this graphic from  Free Inquiry, Vol. 29, No. 1 Jan. 2009: 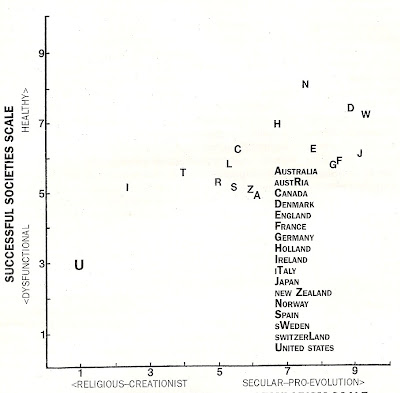 It shows successful societies in relation to degree of religious beliefs.. Basically, for  18 out of 19 of the most prosperous democracies,  the share of population reporting absolute belief in a god or gods ranges from between as little as a few percent to at most one-half. In some of these nations, mainly in western Europe, two-thirds proclaim to be either atheists or agnostics. Compare this to the outlier U.S. (U) where 83 percent express solid belief- and this is for the patriarchal, personal version of a hyper-engaged deity.

One of the most circulated canards concerning religious belief is that most of humankind is invested in it. We are asked to believe the vast majority – for some reason- find it essential to link up with a religion to make their life meaningful. Of course, this is tommyrot and poppycock, and now there is ample statistical evidence to back it up – starting with a measure known as the ‘Gini coefficient’ which registers the degree of economic and income inequality in any given nation, referenced as a decimal. Or, more often (in non-technical venues) as a plain number between 0 and 100.

In terms of practical applications, a Gini index of zero would denote perfect equality. In terms of western industrial nations, most developed European nations and Canada tend to have Gini indices between 24 and 36, the United States' and Mexico's Gini indices are both above 40, indicating that the United States and Mexico have greater inequality. In the whole panoply of criteria, and the full spectrum of research, the Gini coefficient (the prime indicator of income inequality) is the key factor. To be specific, across the first world (of developed nations) lower economic and income equality correlates with lower religiosity. This pattern is “statistically progressive” according to a recent article in Free Inquiry (Jan. 2009) and “no exceptions are known”.

The warp and woof of advanced, collated sociological research into religiosity and secularism and sociological health as a function of either- is well documented in the aforementioned issue (Vol. 29, No. 1) ‘The Future of Religion’, p. 24. As noted therein, the thrust of this research is that religion is falling like tenpins in all first world democracies, with the exception of the U.S., and that the least dysfunctional societies are the least theistic.

The primary finding that runs likes a thread through all this research is that religious belief and activity is a superficial coping mechanism that is easily cast aside when the majority in a given society enjoy true (not faux) democratic government, and enjoy a secure, comfortable and middle class lifestyle.Those who claim the universality of religion or that it is integral to human nature commit the basic selection effects error, in that they conveniently overlook the data which show broad secularization of western Europe, Anglo-Australia, Canada and other developed nations.
The core of research (largely statistical) directed at this issue shows the primary reason the U.S. is a statistical outlier in religious belief is income inequality (as measured by the Gini coefficient).
This index has seen inequality increase ever since Bush Jr. was handed his presidency, compliments of the five Supremes, in 2000.

Meanwhile, with its historically lower taxes, fewer public safety nets, more poor than rich (by more than a 25:1 ratio), the U.S. displays a greater disparity than any other nation. Moreover, it displays a much greater social pathology. Understanding the basis of this pathology doesn’t take a genius, including the inputs from globalization and worker redundancy derived from it.

Thus we read in the latest issue of TIME (July 11-18, pp. 16-17) that even after the rise of open markets, shuttering of factories, easy access to cheap labor plus "mainstream politicians who took their support for granted but served the interests of the wealthy" that "the white working class never went away". No it "stewed in its own resentments feeling variously patronized, ignored and belittled by the elites".

Hence, they have struck back by knocking down the final pillars of faith to which they had clung, mainstream government and religion in the form of the churches.  Hence, it is not surprising at all the working class to which J.D. Vance refers in his essay no longer wants any part of his hollow creed or any other. What, after all, has it delivered? More joblessness, more despair and more hungry mouths of his children while the elites travel to St Kitts for special chocolate spa treatments and 18 holes of golf.

Mr. Vance poignantly yearns the working class whites would have received from their own faiths those marvelous qualities his delivered: "introspection, moral guidance and social support".

But, of course, because they couldn't even deliver warm bread and soup for their kids' at night, they obviously wouldn't believe the mere abstractions could be delivered. And so the only natural recourse was to drop the faith and "point a finger at the faceless elites in Washington".

Sadly, just as Brexit was incepted by the political elites'  total abandonment of working class whites, so might the election of Trump be incepted here. Let's hope not,  but really, are the "paranoid" working class whites enticed to embrace any hope for their future by the Wall Street- friendly, Neoliberal warhawk Hillary?

Probably no more than they're likely to return to the pews and preacher lectures about the need to return to moral probity.
Posted by Copernicus at 7:20 AM