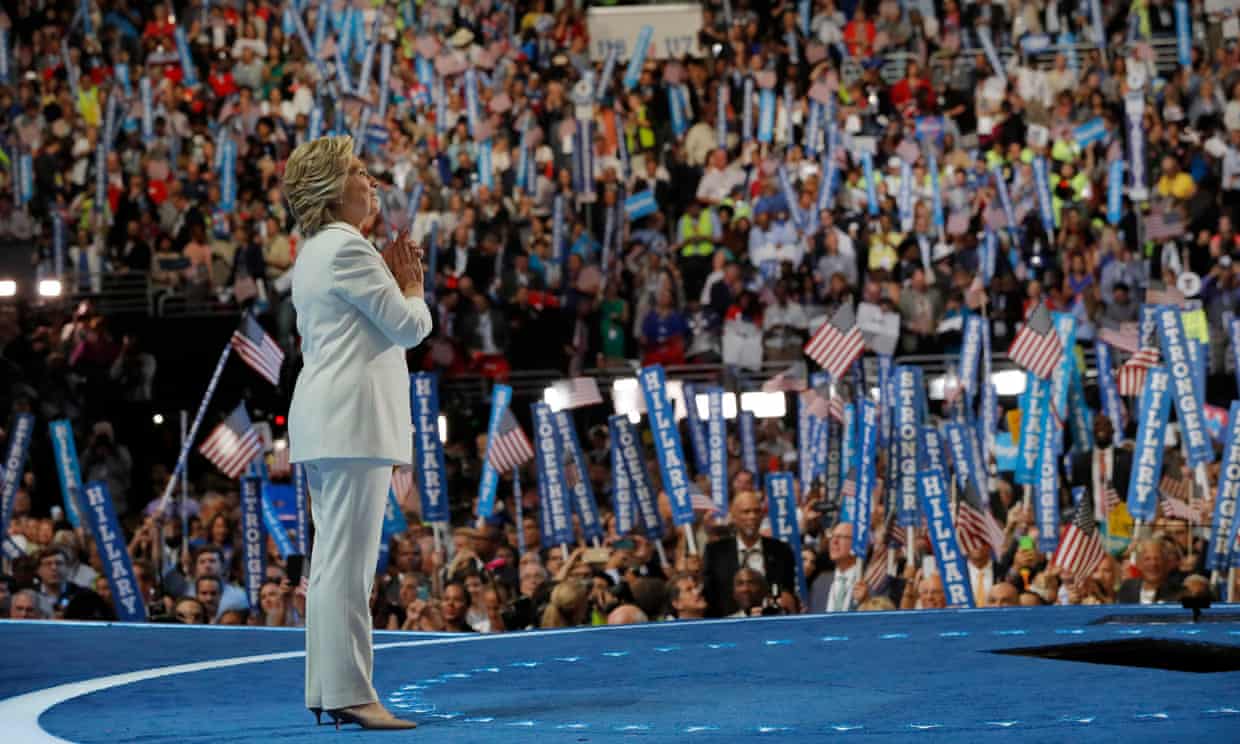 Hillary accepts the Dem nomination last night. Will the Dem convention help her ride to victory in November with a winning coalition?? Doubtful, because coalitions are inherently too variable,  unstable.


It was JFK who first warned about the fallacy of bringing temporary coalitions together every 4 years in an effort to win general elections. He insisted a political party needed to be based on "a common history and heritage", i.e. historically enduring principles that uniquely identified a Party. In his own words:

"For the Democratic Party is not a collection of diverse interests brought together only to win elections. We are united instead by a common history and heritage--by a respect for the deeds of the past and a recognition of the needs of the future "-

At one time the Dems stood for core principles and they constituted more than a temporary ensemble or "coalition" brought together every four years by dodgy rhetoric to win one election. Now, having sold out to the money changers, bankers and business assholes - not to mention the pseudo-free market hacks and economists -  they are barely discernible from the Republicans. Let me correct that, barely discernible except now the Rs have a loose cannon named Donald J. Trump making it easy for the Dems to seize the mantle of political sanity.

But is political sanity enough in an unconventional election year in which powerful populist uprisings have emerged on the Left and Right? I don't believe so. The reason is that most populist uprisings are driven by passions - raw emotions - not wonkish rhetoric or transparent boilerplate speeches at conventions.

The bottom line is it is extremely dicey to try to assemble a winning coalition from people at the extreme edges of the political spectrum driven by passions. This is especially the case when many of them (4 m in the case of Sanders' supporters) have only recently been brought into the electoral mix. .Hence, these newbies have no ab initio commitment to vote, period. They were only driven into the Sanders (or Trump) fold because of what they saw and heard that echoed with their deepest aspirations. This was especially in the case of Sanders' supporters.

The other problem with temporary coalitions is they are inherently unstable, in time, space and mass. The one that swept Obama into the oval office was exceptional by any standard because it brought so many  energized African -Americans into the political process at once.. Let's be frank that for the most part they were not energized so much by Obama's words but via identity: they saw and heard a person of color like them, and they were going to support him to the hilt.

I have heard several arguments so far that if Hillary is to win in November, she will have to muster at least the same mass of turnout - including black voters- that Obama did in 2008. But I simply can't see this happening. If Obama's 2008  success was mainly driven by identity politics, why would the same passion be shown for Hillary Clinton who is not black? It wouldn't. Indeed, Hillary will be lucky to grab half the African-American novel turnout that Obama did. Add in all the barriers erected in red states, especially via new voter ID laws, and the barrier becomes even more formidable.

Now, it is true that Hillary can also profit from an identity component of females, among whom many are black. The take right now is older (age 50 plus) women are going for her by at least 85% to 15%.. However, she's having a much more difficult time among millennial women. (Age 18-34 especially).

That leaves only the members of the disaffected Left (mainly those dismissed - as by hardcore feminist Amanda Marcotte as "dead enders") . Dead enders they may well be, but without a sufficient turnout among them I see no way for Clinton and the Dems to grab a third consecutive 4-year term in the White House. It just isn't going to happen.

Estimates of the number of disaffected Sanders' supporters who will join Hillary's crusade have ranged from 80 percent to 90 percent. These are large proportions to be sure, but in what is likely to be a nail biter election they still may not be enough. She will more likely need 98 to 99 percent. A ten percent deficit, for example, translates to around 1.3 million who in the best case scenario simply don't show up. (In the worst case, obviously, they vote Trump).  If these 1.3 million are sprinkled in "swing" states like Colorado, Virginia, or Florida, where vote margins for victory can be as small as 100,000, Hillary would be in serious trouble.

All of this is meant to show the inherent risk in depending on a temporary coalition brought together only for winning an election. What about a spectacular convention, like the just finished DNC ?(Which truth be told looked and felt more like the one that marked Reagan's ascension in 1980, what with all the flags, faith, and military props)

History shows that conventions by themselves don't produce electoral winners. I don't care how terrific the speeches are or the patriotic props. Look at Obama's sensational 2004 speech. Despite its quality,  Kerry still couldn't prevail over George W. Bush. (Part of the reason was the election being stolen by Diebold electronic voting machines in Ohio, which secretly transferred votes from the D to the R column. See the documentary: "As Ohio Goes So Goes The Nation")

Much more critical are the debates. Hence, Hillary's chances - despite giving a "boilerplate speech"  last night - in the words of Financial Times columnist Edward Luce) will improve if she can deliver a sterling performance in the fall debates. If not, and bear in mind she's going against a character who doesn't adhere to strict rules, that will be it.

Hillary was terrific in skewering Trump as "a little man" before the assembled chorus last night, but she won't be able to do that in formal debates. She will also have to face the fact that "the Donald" may enter those debates with much lower expectations than imposed on her.

The other main aspect of winning an electoral contest,  even if you haven't based your campaign on firm principles (other than "Not him!") is absolutely not to make unforced errors that can affect your critical turnout. So far, over the primary campaign and into the convention, I count at least two major ones made by Hillary: 1) her March speech pandering to AIPAC (America-Israel Political Action Committee, e.g.  http://brane-space.blogspot.com/2016/03/as-predicted-hillary-panders-to-aipac.html

And 2) Her selection of Wall Street pal Tim Kaine as running mate.

The first confirms her warhawk status which will likely depress turnout by hardcore, anti-war Left folks, and the second is going to depress turnout among the Bernie Left supporters. The latter were looking for someone to excite and energize them, but Tim Kaine is like giving them a strong dose of valium when Red Bull was needed.

Once again, if firm principles were guiding the Clinton campaign as opposed to trying to guess a likely coalition component to match an action (say white repub males to buy into Tim Kaine) then such unforced errors wouldn't be made. The Clintonites would have grasped that picking Kaine wouldn't have snatched as many Rs - of whatever color- than picking Warren instead to energize the whole left base.  This pick then, may net Clinton 100,000 to 150,000 disaffected white, blue collar Reagan Dems, but at the expense of  2 m Sanders' voters.

The good news is that amidst all the red, white and blue 'rah rah' from last night (including keeping Sanders' diehards under control) coupled with Hillary's ok speech, there were no unforced errors. The bad news is that conventions don't matter in the long run and she's already committed two big unforced errors.

In any case, by the end of this election the cautionary tale should once more be sounded: "Don't depend on iffy coalitions to get you through to the end. Establish firm principles for your campaign and allow them to be your guide".