The Smithsonian channel's documentary, 'Islam and the West', ought to be required viewing for every American and especially the hysterical subset that believes all Muslims are the next thing to demons. The documentary traces the origins of Islam from Mohammed and to the present day, including how none other than the Brits- in the latter days of their Empire - drew up all the boundaries in the Middle East including for Jordan, Syria, Iraq and Palestine - totally ignoring ethnic and tribal affiliations. 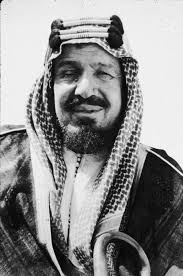 to lay claim to most of the Arabian peninsula via the "kingdom" of Saudi Arabia. This Bedouin bunch got territory and in return the Brits lay claim to a lot of oil.  We also learn that the most vicious sect in all of Islam - the Wahabbists- was also founded in this kingdom. The documentary zooms in on their feral butchery over decades and how this vicious bunch of scum has now tainted all of Islam with its fanaticism. And lest Americans forget - given too many have the memory of gnats- let's recall it was 19 Wahabbi followers from Saudi Arabia that carried out the 9/11 attacks. It wasn't Taliban or Iranians.

All of this is germane to the Wall Street Journal editorial, 'Who Lost the Saudis?' (Jan. 3, p. A14) which bemoans that the Saudis "might be lost as we enter the last perilous year of the Obama presidency". My response? Who the fuck cares? We as a putative democratic nation allegedly dedicated to pursuit of liberty shouldn't be making any common cause with these deplorable rat bastards anyway!  Again, just in case people forget, this is the same kingdom that holds women guilty if they've been raped and has even been known to deliver thousands of lashes to the victims. It also beheads people who veer too far off the path and recently executed 47 they claimed to be "terrorists" - although in the Saudi kingdom that could mean merely speaking out against the regime.

Those executed included a prominent Shiite cleric, Nemer-al -Nemer, which has now inflamed tensions across the Middle East and has the Shiites in an uproar from Iran to Indonesia and in between..

As often seen on its op-ed pages, the WSJ editor goes off half-cocked in his jeremiad against Iran while forgetting about the Saudi transgressions. He appears to be especially worried about Iran and Russia joining up to "topple the House of Saud" - but again so what?  Someone needs to take out the garbage. Think of all those Saudi women who will now be spared 1,000  lashes because they were raped by their brothers! Think of all the Saudi rationalists and atheists who will now be spared their heads for speaking out.

The WSJ editor zooms in on Iran's alleged motive as Saudi oil production keeping the oil glut going and oil -gas prices low. The idiot doesn't even realize the Saudis are hurting the U.S. as much as Iran - given now the U.S fracking industry has gone into the crapper because the price of oil has fallen below the threshold at which it make it worthwhile to remove. (Not that I'm in favor of fracking, of course, only that this is the counterpoint to the WSJ's blaming Iran for Saudi contribution to the oil price plunge when the WSJ has always been enamored of U.S. fracking.)

The dumbest statement of all from this morass of bullshit:

"The Saudis are often difficult allies, especially the support by rich Wahabbi sheiks for radical Islamist mosques and schools around the world But in a Middle East wracked by civil wars, political upheaval and Iranian imperialism the Saudis are the best friend we have"

So, according to the WSJ editor, we are better off embracing this bunch that harbors "radical Wahabbi schools" that produced the 9/11 terrorists than making common cause with Iran. He refers to "Iranian imperialism" but conveniently forgets that WE - the U.S. - commenced Iran's march to a theocratic imperialism after we (at the behest of the CIA and affiliates) deposed Premier Mohammed Mossadegh in a coup d'etat.  His offense? He had sought to audit the books of the Anglo-Iranian Oil Company (AIOC), and implement new rules.

The eventual decision was to remove this man - the best chance at Iranian democracy  - by  the CIA via coup d'état  in Operation TPAJAX. So if Iran is "imperial" today we are the ones to blame, at least in terms of interfering in their then democratic processes by forcefully removing a head of state (like we did with Salvador Allende in Chile - except more violently in that case).

Maybe by 2145 they will also admit their role in Kennedy's assassination  - long past the time anyone with any interest has died out.

In the meantime, no U.S. administration which professes to be truly against terrorists and "radical Islam" should have anything more to do with these assholes from the House of Saud.

http://www.salon.com/2016/01/06/saudi_arabia_funds_and_exports_islamic_extremism_the_truth_behind_the_toxic_u_s_relationship_with_the_theocratic_nation/
Posted by Copernicus at 8:00 AM