According to new research published Wednesday in the  journal Nature  humans may have had a close escape from an imminent Ice Age as recently as the current geological epoch known as the Holocene. The tenet being that pre-industrial  modifications of the climate through agriculture, large  fires and deforestation might have barely avoided it

In the words of Hans Joachim Schellnhuber, one of the paper's three authors and founding director of the Potsdam Institute for Climate Impact Research:

"Humanity narrowly escaped a glacial inception in the middle of the Holocene, which was almost suppressing the formation of civilization,"

In addition, the study asserts that massive human greenhouse gas emissions since that time have probably "postponed" what might otherwise be another ice age "by at least 100,000 years."
The new research is based on the idea that there are two key factors that shape whether Earth goes into an ice age. There's one that humans can influence, as well as one they really can't.

The authors claim that the factor "out of our control" is Earth's "Milankovitch cycles", which  supposedly describe the erratic way in which the planet orbits the sun and spins on its axis over vast time periods. Earth's orbit grows slowly more and less elliptical, even as the angle of the planet's axial tilt and the wobble of the poles as the planet spins (much like what you see with a spinning top) also change slightly over thousands of years.

However, in an earlier blog post I noted there is no support from standard celestial mechanics for any such changes, e.g. in obliquity,

'its contention that the obliquity of the ecliptic (inclination of Earth to its orbital axis) varies from 21 to 24 degrees over a 41,000 period .... is certainly a magnitude in excess of a half degree (1800”) on either side of its current 23.5 deg.

Astronomers-astrometrists recognize no such period or differential of axial tilt. The following is from the book, Astronomy- Principles and Practice by A.E. Roy and D. Clarke, 1978, Adam Hilger Books, p. 118:

For the benefit of non-astronomers, the magnitude cited (9.”2) isn’t even one hundredth of a degree"

The point is that until such time this conjecture is confirmed and integrated into celestial mechanics, it is really not a factor at all, especially one "out of our control".

Hence, the authors' claimed  "second factor that's in our control" is actually the only one:  how much carbon dioxide is in the atmosphere. We are able to turn this knob by how many forests we cut down and how many fossil fuels we burn, both processes that transfer carbon into the atmosphere.

Atmospheric carbon dioxide traps heat, causing an overall warming effect, and this will happen no matter where the planet is in its various orbital cycles. And if there's enough of it, it can counteract the tendency of these cycles to make and then unmake ice ages.

Using analysis of past planetary glaciations and a computer model of Earth that is able to predict their occurrence, the researchers found that carbon dioxide concentrations were only slightly too high to push us into glaciation a few thousand years ago.

"The Earth system would already be well on the way towards a new glacial state if the pre-industrial CO2 level had been merely 40 (parts per million) lower than it was during the late Holocene," the authors write. Indeed, they note that about 800,000 years ago, orbital alignments were similar, but carbon dioxide concentrations were around 240 parts per million, and glaciation did indeed occur.  But now, as concentrations push 400 ppm and are rising by 2 ppm/ yr. there is no chance at all of further Ice ages, period - unless our planet truly did suddenly tilt its axis by three degrees or more, or somehow alter its orbit to one with a longer semi-major axis.

Speaking of glaciers, alarming new findings from here in Colorado disclose that rock glaciers and other ice contaiing water -  west of Boulder - will soon vanish. The Arikaree Glacier, which feeds North Boulder Creek, had held steady from 1965 through 1997. This glacier, likely more than 1,000 years old — has been thinning by about 1 meter a year over the past 15 years and will disappear completely in 25 years, a team of scientists concluded.

The scientists, from CU - Boulder, scientists using ground-penetrating radar to learn that climate change is shrinking glaciers and other icy terrain in the Rocky Mountains — raising concerns about water supplies. In the words of hydrologist Mark Williams of the Institute of Arctic and Alpine Research, and lead author of the study and a principal investigator at CU's Niwot Ridge station:

"We can't get out of this. It is wired now, on the Colorado Front Range and in the Arctic. There's going to be less ability, on the water side, to address low flows in July and August .Glacier National Park is not going to have glaciers in another couple decades. People are going to be upset about that. We're in a loop we cannot get out of."

He added that a loss of sunlight reflectivity, as snow and ice disappear, will push temperatures even higher.

While idiot deniers continue their harangues against the "climate change and global warming hoax"  actual science has had the last word. In this case, the melting of glaciers and other ice in Colorado's mountains jibes with a worldwide trend that scientists and governments have linked to climate change. The shrinking of Earth's frozen "cryosphere" has been documented across Arctic sea ice, tundra and other areas that traditionally hold packed snow.

Janice and I observed these effects also, back in March, 2005, when we flew in a small plane round Mt. Denali, Alaska, e.g. 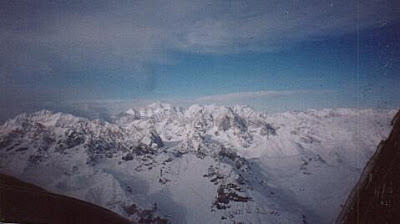 Before taking off, above, and one view from the cockpit of the plane on or approach  below

The original deal was that we were supposed to land on a glacier near the peak and be able to walk around and see Denali up close and personal. This was the package promised. However, after several swoops low over the area the pilot warned he wouldn't be able to fulfill it. His 27 years of experience and hawk eyes informed him the supporting snow and ice was much too treacherous to sustain even a small plane landing. Did we really want our "money's worth"? Uh no.  What we saw, however, was enough to show us that those who denied global warming were spouting bollocks and balderdash.

Alpine glaciers form when net snow accumulation leads to snow compressing and re-crystallizing into dense ice, which flows slowly to lower elevations, sculpting land. Over the past three decades, scientists measuring glaciers worldwide, using remote sensing and other methods, have documented shrinkage. We saw it in Alaska, as well as in Switzerland (Jugfrau region) when we were there in Sept. 2014, and compared it to photos of when we were there in August, 1978.

The work in Colorado focused on the size of the glacier, which had a maximum depth of 25 meters, shallower at the top and toes. Scientists also measured ice thickness in the Green Lakes Valley area below Niwot Ridge, which includes mounds of ice, dirt and rock that store water as well as subsurface ice and seasonally frozen lakes. They used radar, electrical devices and seismometers that send signals through subsurface ice.

The data continue to accumulate that the Earth's warming is real and having major consequences, and yet a sector of the populace remains firmly committed to the fiction that it's all part of "natural cycles".  Mostly done to try to escape species' responsibility and the sobering economic changes needed to at least make the coming climate onslaught more adaptable for humans,

We may have to "repent at leisure" thanks to attending too long to these naysayers.
Posted by Copernicus at 9:03 AM