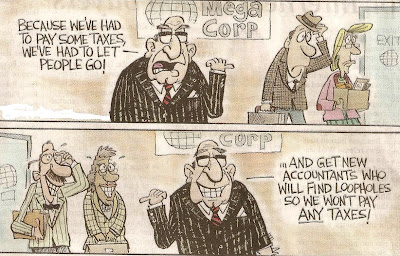 Given the entire economic system we have is essentially fraudulent and based on built-in inefficiencies and designed inequality (by way of the Pareto Distribution), it's no surprise that its continued existence depends on a mammoth program of coordinated PR, lies and distortions. Take those away, or let the hoi polloi get even a peek behind the curtain, and all hell would break loose because people would see how they're really getting screwed and shafted six ways from Sunday.

It isn't possible to cover the whole spectrum of economic lies but while I'll do in this blog is note the major ones then hope industrious and alerted readers will be able to google more information on their own.

Before doing this, let's understand that we no longer have a democracy - especially since the 'Citizens United' Supreme Court Ruling in 2009, reinforcing the power of corporations to pervert elections using money as "free speech" - which is attached to the (earlier) 1886 Santa Clara ruling that they had the same rights as "persons" under the 14th amendment.

What happened several times during his tenure was to awaken him to the encroaching dangers which commenced in April, 1962 with the Steel crisis. Basically U.S. Steel sought to jack up prices even after telling JFK they wouldn't so Kennedy pulled the plug on all federal contracts, including for defense - ship building, jets, armaments. Scalded by a bold, ballsy president, the giant corporation backed off but Kennedy's actions were not forgotten.

For example, author James Douglass (JFK and the Unspeakable: Why He Died and Why it Matters, 2007, Orbis Books, p. 164) observes:

"In the wake of the April, 1962 steel crisis, Luce’s FORTUNE magazine had implicitly warned the president, on behalf of the American business elite, to beware ‘the ides of April’ for his dominant role in settling the crisis”.

"Besides being CIA-friendly, Henry Luce was an enemy to Kennedy"

And who can forget that the Zapruder film first came into possession of Luce's TIME, where CIA handlers attempted to exchange key frames to remove the backward head snap, providing support for the theory that a shot came from behind.

Kennedy's other wake up call occurred when he addressed the Business Council (known as the Business Advisory Council until 1962) and afterward observed that it was "the only audience that did not rise to its feet upon the entrance of the President of the United States" (Kennedy, p. 594, by Theodore C. Sorenson, 1965).

Many of us involved in deep politics believe JFK was being signalled that he wasn't the highest authority in the land, and that it was Big Business, representing the corporate world. Few of us alive at the time realized in the wake of his assassination how rapidly that would come to pass!

Anyway, once one comprehends how Big Business as the "true rulers of the country" work hand in hand with a hostage government, it becomes easier to see how and why the lies and distortions occur.

This is one of the most basic lies, in that its intent is always to lowball the true unemployment rate. This is done by dropping anyone still unemployed after six months as "discouraged". In effect, the U.S. retains a low rate of 5-6% unless there are extraordinary circumstances in which millions lose their jobs in roughly the same time interval. (Such as the recession that began in 2007 and is likely continuing).

A key advantage - as with most of these lies- is monetary. If a person is no longer truly unemployed after 6 months then the government doesn't have to make available unemployment insurance. (The exception again has occurred with the recession, with many unemployed now having been extended for 99 weeks, but further benefits require congressional action and the tight fisted repukes aren't so inclined).

This again is lowballed, with the definition artificially and unrealistically constructed, and again...based on money considerations. If a group or person therefore doesn't meet the lowballed threshold then he can't receive benefits including food stamps, other home heating assistance etc.

The current poverty rates are miserly to be sure: $21,000 for a family of 4 and $12,968 for an over-65 couple. Indeed as I argued in earlier blogs the last ought to be at least $38,000/yr. and the former more like $44,000/yr. if one takes into account inflation since the rates were last adjusted in 1969. Also none of these rates takes into account medical inflation or fuel costs.

This is again, lowballed, and based on the numbers for the CPI or "consumer price index". Once more it's artificial and cheap since it doesn't factor in medical costs (namely medical inflation, via prescription drugs) and increased fuel prices- like for home heating or air conditioning.

The effect is that during particularly inflationary periods for fuel and medical costs seniors can't keep up. As an example here, medical costs via Medicare premiums have increased 122% since 2000 but Social Security COLAs have only increased 33% (Two years without any COLAs have contributed to this).

The end result is that over 24 million fixed income seniors who depend exclusively on Social Security are actually getting poorer! Since their too low COLAs force them to pay more out of pocket, they are losing their savings in the bid to stay afloat. This is why many now do without a/c during the summer and have been splitting their prescription drugs with dire health consequences.

The converse of this is the definition of the senior "high income earner" which again, allows money to be saved by using a miserly definition to justify sparing government any added costs. For example, the corporate tax-hating government can justify "means testing" if the income is deemed too high.

Meanwhile, $52,000 isn't all that great considering much higher medical costs for seniors, higher co-payments and recall they must cough up nearly 20% for any operations since Medicare doesn't pay all. Indeed, most financial columnists writing on retirement incomes (e.g. in Smart Money magazine last issue), place a couple over 65 with ~ $50,000/yr. income as just barely in the middle class!

Given that 70% of oldsters will spend at least 6 months in a nursing home for special care and 50% may for a year or more, this makes sense given nursing home care now runs about $106,000/yr. according to the most recent issue of MONEY magazine. In other words, one single year's nursing home stay can wipe out two year's of income!

At the very least, a small concession could be made by not taxing any senior with income of $50,000 or less. But this will never happen so long as $52,000/yr is regarded as high income.

The corporate media as the mouthpieces of the corporate elites and government are to be expected to be the major purveyors of lies and disinformation. One of the most galling appeared yesterday in The Denver Post under an Associated Press released, authored by Stephen Ohlemacher and entitled: 'Memo to Obama on Tax Rates'.

Let's look at a couple of his more egregious misrepresentations:

(a) The Wealthiest people pay a lot more in taxes than the middle class- the 10% of households with highest incomes pay more than 70% of federal income taxes.

This is a common misrepresentation because no one scours the numbers and exposed the detritus. Yes, this group pays 70% of the "federal income taxes" but that's a pittance relative to their net worth- assets! Given one year's tax take (after all the deductions etc) is about $1.7 trillion that means the wealthiest 10% pay about $1.2 trillion and the middle class about $0.5 trillion. But given the total assets of the wealthiest are nearly $77 trillion, that amount actually paid in taxes is only 1.55% of their total wealth, Meanwhile, the middle class, now holding less than $15 trillion in net worth assets, has paid a total of 3.3% of their assets toward taxes! In other words the middle class are coughing up twice as much as the hyper-rich as a percentage of their assets!

Note here he's really comparing apples and oranges! He ramps up the % for higher income people by including payroll and "other taxes" while he doesn't make the comparable inclusion for the lower income earners! Not stated is that once a person reaches $106,800 income, he pays no more for Social Security (though the much smaller Medicare tax applies to all wages.) Warren Buffett thus pays the exact same amount of Social Security taxes as someone who earns $106,800. When one makes these corrections, including the fact that the rich can take many more arcane deductions (as well as receiving larger refunds via Bush tax cuts), the percentages of taxes paid are actually nearly the same (28% v. 29.1%)

The Bush tax cuts alone give the average person in the top 1% (earning about $345,000/year or equal to 5 middle income salaries) an average annual tax refund equal to the purchase of a new Lexus. Meanwhile, Joe and Mary Schmoe collect maybe $450 total, if they're lucky and that will likely be at the expense of their future benefits in Medicare and Social Security.

Another point: All of Ohlemacher's data come from the "Tax Policy center" which he describes as a "think tank" but doesn't mention that it's a conservative-corporate friendly think tank. Which brings us to think tanks and their lies!

One of the most often used lies began circulating with the Bush tax cuts in March, 2001, and that was embodied in JFK being a "tax cutter" - thereby attempting to justify Bush's 2001 tax cuts (tilted 65% toward the richest) with JFK's 1963 cuts. Thus, the tactic is to invoke a leading liberal light to show 'hey, your great liberal icon JFK wanted to cut taxes like Bushie!"

"As proposed in his 1963 message to congress, the tax cuts for individuals and businesses were, in percentage terms, intended to give the largest reductions to the poorest third of the population"

Thus, Kennedy's tax cuts were exactly opposite to Bush's which delivered the biggest cuts to the top 10%. Not mentioned either by the random Kennedy tax cutting citers was that he insisted on a withholding tax for dividends and interest, the same as for wages (Gibson, ibid.) He feared that too many of the rich were escaping by leaving their interest and dividends unreported.

Also unmentioned by the Kennedy invokers was that the rates on the richest were only lowered to 65%, while the lowest income earners' were reduced to 14%. (This is compared to the marginal rates at the time of the Bush tax cuts, of 39.5%)

Ironically also, and this is the real hum-dinger, Republicans fiercely opposed Kennedy's proposed tax cuts, arguing that federal spending should first be reduced before taxes are cut (the nation then had a $12 billion deficit).

Incredible how the times have changed, and the nature of the other lies from political parties, including that taxes must not be hiked or existing tax cuts removed....never, ever, ever!
Posted by Copernicus at 8:55 AM