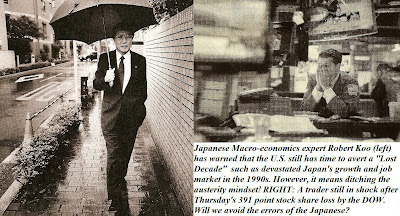 This last week provided a sobering reminder of the parlous economic straits that persist in the U.S. and around the world, even as the DOW lost 6.4% of its value with selloffs approaching panic level. Even as the DOW plummeted, investors fleeing equities rushed into U.S. Treasury bonds for their perceived safety. The resulting increased price, because of much increased demand, pushed their yields to the lowest values since the 1950s. Even gold and silver fell (silver more than gold) as desperate investors attempted to seek out anything of value. Reflecting the trading anxiety, total trading volume on the NYSE hit 6.95 million shares on Thrusday, the largest since the debt crisis frenzy of Aug. 11.

Meanwhile, the Fed and Federal Reserve Chairman Ben Bernanke, are hoping to push another round of stimulus by purchasing another $600b of longer maturity bonds. They also are weighing allowing interest rates to even go lower than the current pathetic ¼ %. Most on the Street don't buy it and are convinced the Federal Reserve is now effectively punchless as demonstrated by Friday's stock drop. According to Bob Worthington, President of Hatteras Funds and quoted in yesterday's WSJ (p. A3):

"It's clear the Fed is out of bullets."

He is quite correct.

Nothing the Fed can do at this stage will make a dime's worth of difference, and won't make banks lend any more money, or people spend more. Nor will it make companies use part of their stashed (in cash) $2.2 trillion to create jobs. In other words, we are headed for a "lost decade" or worse, just like Japan, unless we change our ways. And by that I mean alter the toxic political tableux to free government to do what it needs to do in a barely viable aggregate demand environment.

The reason is that what we're seeing is what Japan macro-economic expert Robert Koo (also an expert on the Japanese deflation of the 1990s leading to their lost decade) calls a "balance sheet recession" and you cannot deal with it in the same way as a typical cyclical recession. Because the balance sheet form features general low aggregate demand in concert with a nation's high deficits, the first reaction is generally to try to cut spending and lower deficits to get back to normal. But in fact, this is the equivalent of tossing gasoline on a raging fire. You are going to make it worse! (Koo does agree deficits must be dealt with but not until after proper stimulus is applied to the moribund economy!)

As Koo points out in a recent interview with MONEY magazine (October, p. 64):

"It is good that congress managed to avoid default. But they should keep in mind that Japan's deficit actually increased when the government tried to cut the budget while the private sector was paying down debts".

And as a recent issue of TIME noted (Sept. 19), the biggest current private players - the Banks - are currently still trying to pay down their debts (e.g. remove risky assets), and hence have reduced their overall lending by 1.3%. The reason noted in the TIME piece is because the stress tests applied in 2009 weren't stringent enough and while they showed the banks were able to survive the 2008 meltdown, they didn't show the extent of liabilities left on their books. In effect, when the banks repaid the federal bailout money, they did it prematurely.

Koo's point is that the Japanese fiscal cutback via an austerity mentality (similar to what pervades the political process now in the U.S.), made their situation much worse and extended the fiscal travail. The U.S. can learn from these Japanese errors, but only if it ditches its austerity obsession-compulsion, or rather the austerity compulsion fueled by the 'Tea Party Express' and its Repuke hatchlings in the House.

As for the complainers that the original Obama 2009 stimulus (now a dirty word thanks to the wingnut and tea party freaks) was useless, Koo adds:

"Obama kept the economy from falling into a Great Depression. But you never become a hero avoiding a crisis. The economy is still struggling so people will say the money was wasted. Not true! The expiration of that package is behind the economy's weakness right now .

Yes, the Bush tax cuts were extended last year, but tax cuts are the least efficient way to support the economy during a balance sheet recession because a large portion of the cuts will be saved or used to pay down consumer debt.

Government spending is much more effective."

In other words, a more solidly rational approach to the economic miasma we're in is to allow ALL those Bush tax cuts to expire, but to then enhance government spending by using the money saved (at least part of it) from the expired tax cuts.

The first and biggest nation-saving, job forming move would be to spend $1.5 TRILLION at once to repair the crumbling infrastructure - including water lines, sewer lines, bridges. That is still only about 45% of what the American Society of Civil Engineers regards as necessary, but it's a start. Meanwhile, Obama's $447b plan is too little and more in line with his overly timid 2009 stimulus of $797b, which was also diluted by being contaminated by one third tax cuts.

In the immediate near future, the Repuke House can stop fucking around and allow a full $3.6b to be passed for disaster relief, without demanding job-weakening -destroying "offsets" to Dept. of Energy programs. (They are currently insisting at least $1.5 billion be cut from those programs to pay for hurricane disaster relief to the NE corridor).

In the end, this nation's destiny and economic future will largely be in the hands of the Republican House and John Boehner- Eric Cantor. If they continue to demand austerity spending cuts they will create the very morass Robert Koo warned us about. And they will be to blame for the the Third World status we find ourselves in, as well as the additional 3 -4 million jobs lost by this time next year.

You can make book on it!
Posted by Copernicus at 10:08 AM