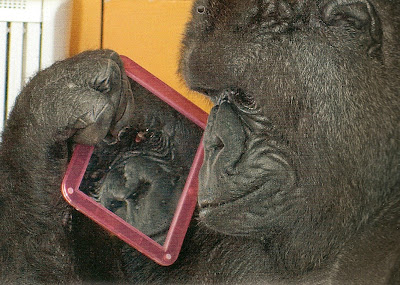 Koko recognizes her visage in a mirror, something virtually no animals apart from humans can do. 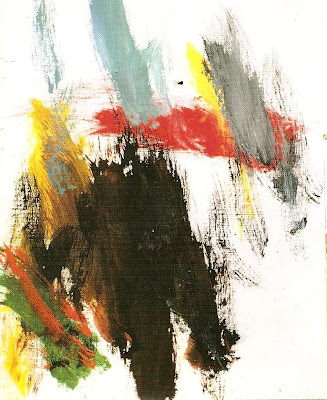 Koko's latest painting- of another gorilla. 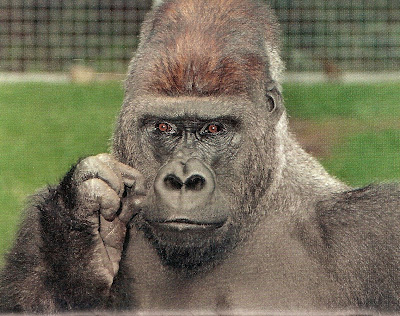 Here, Koko is using the precise sign language for "fruit".

At times, it's easy to lose sight of the forest for the trees and get lost in burdensome details. For example, in showing the macro-evolutionary basis for the common ancestry of chimps and humans by reference to both species having the exact same cytochrome-c sequence (a phenomenon, by the way, which neither Michael Behe nor any of his contrarian associates at the Discovery Institute have yet explained).

But right in front of our eyes there often emerge blatantly obvious and plain connections to our ape cousins! A case in point, is Koko the gorilla, who possesses a number of remarkable traits often only associated with humans. These include the ability for self-conscious awareness and recognition (by recognizing herself in a mirror), doing respectable paintings, and using sign language to communicate (she has a vocabulary of nearly 100 sign symbols now - and in the accompanying image is show signing for "fruit")

Koko also posesses a sense of morality, and this is seen whenever she's with her pet kitten "All Ball". This iconic pair have made an indelible impression on millions, touching both hearts and minds on the true nature of gorillas. One also beholds, moral protective instincts displayed - as for example if the kitten appears threatened by a large spider, then Koko will step in and intervene. Of course, to do so is to evince a basic moral sense. It is to recognize a possible threat, then act to reduce or eliminate it for another.

Humans do the same thing, for examine a human mother or even a plain human stranger will need no supernatural bidding or orders to protect a small child if a large Rottweiler is meandering nearby. No god is needed to confer benediction here, and this also reinforces the theory of evolution has having a natural morality component.

The value of beings like Koko is they echo our own humanity through their approximate human actions, whether painting, stroking a pet kitten, protecting the pet kitten, or using sign language to ask for a large banana. Sure, there are those (mainly jealous fundies) who would demean such similarities or attribute them to gimmickry, but given they can't even demonstrate minimum evidence (or necessary and sufficient conditions) for their god, what do they know?

At least in Koko we have a hands-on, literal cousin animal that displays the same sort of attributes we assign to humans. We don't have to make up any supernatural mumbo-jumbo.

It even goes beyond this. If Koko protects her kitten "All Ball", then it means she has a sensibility that the kitten might suffer if she doesn't step in. The obverse of this is that Koko would never ever torture her kitten, because she knows that this would CAUSE suffering in the tiny creature. Is a god telling her it's wrong? No, her basic perceptions of feeling and animal sensitivity - in this case to another being's state of comfort- is all that's needed. Koko doesn't worship a god any more than I do!

James Rachels, in his controversial book, Created From Animals, thereby makes the strong case that unless animals are extended consideration and value, humans can't have it either. Merely to argue humans- by virtue of being "exalted thinking beings"- merit more consideration, is no argument and can indeed be shown to fail at numerous levels. As Rachels points out (p. 191):

"For example, normal adult humans have the obligation not to torture each other. What characteristics make it possible for a person to have this obligation? For one thing, he must be able to understand what torture is, and he must be capable of recognizing that it is wrong."

Of course, here is where certain problems may enter, because a certain set of fundamentalists believes that if one is recognizing "wrong" one is giving putative or at least indirect credence to a divine lawmaker. Else, why would one regard torture as wrong?

Well, for the same reason Koko would not torture her kitten, because at some evolutionary level she knows it will injure her charge! NO god informs her of this, nor any god belief! Having seen pain or harm inflicted-perhaps on other animals in the African forests- she knows that certain actions will inflict harm.

Rachels, in his book (ibid.) uses the example of a "severely retarded person" who is incapable of relating what he does in terms of actions, to consequences or suffering. Thus, such a person could willy-nilly stab or slice people at will with a pen knife or drawing compass-divider and not know any better or appreciate their suffering from his actions. We do not regard such people as possessing the discriminating capacity for empathy, so don't hold them accountable. (Or at least we shouldn't).

Thus we come to the key point made:

Thus, if we hear or read about someone being tortured we regard it as wrong not because of a god's moral edicts, but because we know that person has suffered pain, and any such affliction is wrong on its face. No god need be added to the equation.

Further, simplistic moral laws like "an eye for an eye" cannot be rigorously followed for the reasons given. If a severely retarded person jabs someone's eye out with a pencil, we would not hold him down and jab out his eye! (Well, on second thought, maybe a bible -banging literalist might).


All of which destroys the premise that "humans are in a special moral category because they are more sensitive to harm than other creatures."

The case of Koko (and millions of other sentient creatures) shows this to be false, and so both humans and non-humans can certainly be equal in their capacity for suffering. Hence, this recognition imposes certain limits on how we treat animals, especially in doing the horrific open vivisection experiments on chimps and monkeys.

More on this to come. For now, Koko and her prized kitten show us there is a lot more to morality than gods and commandments!
Posted by Copernicus at 1:53 PM