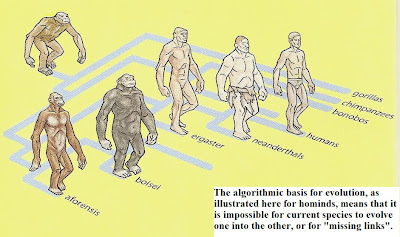 Myths and misinterpretations of evolution abound, especially among the ID- Creationist crowd, so in his blog we examine ten of the most prominent ones and explode them one by one:


1. If Evolution’s true then why don’t we see apes evolving into humans?

This myth errs in not recognizing that humans, apes and monkeys are all distant cousins, as opposed to species in the same SINGLE evolutionary path. Humans don’t come from apes but from a common ancestor that was neither ape nor human in the distant past. Also, it overlooks the algorithmic branching basis of evolution, e.g.
http://brane-space.blogspot.com/2010/11/missing-link-malarkey.html

Thus, multiple evolutionary offshoots (as shown above) confirm no (single) primate evolution is based on a single path. Thus in the past seven million years there have evolved multiple hominid species including Homo Habilis, Home Erectus, and Homo Neanderthalis- all of which went extinct along the way- except modern humans or Homo sapiens. Meanwhile the idea of current apes evolving to humans totally turns this algorithmic-convergence on its head, and proposes a singly determined evolutionary path! Worse, doing it for two current species that have already stabilized in their respective genomes!

For analogous reasons(to why we don’t observe current apes evolving into humans), the concept of a “missing link" is totally inappropriate since it skews perceptions of what is really happening in evolution. Thereby, people are led to believe or think of evolution as a simple linear unfolding process rather than a complex path of branching trees, at differing times. They then question the concept of some "missing link" when either multiple ones are found (or claimed to be) or expected finds don't materialize within the sequence. In either case, the wrong expectations are used to attempt to fault evolution, when the real problem is that an oversimplistic template is being employed which skews perceptions and judgment.

With their “missing link” obsession, Creationists demand “just one transitional form” that shows evolution, but as noted above, evolution isn’t proved via a single fossil, or path to such – because the whole evolutionary scheme is algorithmic with multiple branches and offshoots. So what creationists are doing is attempting a radical simplification that deviates from the nature of evidence actually obtained.

Again, as presented in the link given for (1), evolution is proved through a convergence of fossils or species – along with a convergence of genetic comparisons between species (e.g. the 2p and 2q chromosomes which are separate in the apes, but which have telomerically fused to become the ‘2’ chromosome in humans, thereby explaining why humans have 23 pairs of chromosomes and apes 24.)


3. Too Many Gaps Exist in the Fossil Record for Evolution to be true.

This is a common myth, but it ignores that fact we have hundreds of intermediary fossils, such as for Archaeopteryx (one of the earliest known fossil birds with reptilian skeleton and feathers). We also have the records for a number of Therapsids, the intermediate species between reptiles and mammals. We also have the intermediary record for Tiktaalik – an extinct, lobe-finned fish fitting between fish and amphibians.

In any case, as I also showed in many previous blogs, fossil record evidence does not make up the entire evidentiary constellation for evolution. We also have genetic evidence for common ancestry, for example of chimps and humans – as revealed in the two species having exactly the same cytochrome-c protein sequence – for which the odds are unfathomably remote (1 in 10 to the 93rd power) to be mere coincidence.

In fact, we do observe evolution happening especially with organisms (e.g. fruit flies, viruses, bacteria) that possess short reproductive cycles. The problem arises because creationists treat micro-evolution disparately from macro-evolution. Because they don't regard the former as part of a continuum leading to the latter, they consider "macro-evolution" the only genuine form. (By “micro-evolution” we mean minute evolutionary change, involving a small proportion of DNA. For example, the emergence of an orange-eyed fruit fly (drosophilia melanogaster) after 20 generations would demonstrate microevolution.)

Macro-evolution entails a proportionately large change in the DNA underlying it that probably reflects ongoing natural selection, over significant time. For example, the change from a cold-blooded dinosaur to a warm-blooded dinosaur that’s a precursor of modern birds would be a case of macroevolution.

The point missed by the Creationists (or perhaps they never processed it in the first place) is that it is hundreds (or thousands) of micro-evolution transitional components that engender macroevolution, whereas creationists think they are two totally distinct aspects that are unrelated. Once one accepts the two are integrated into one interwoven process then one can accept that we DO see evolution actually occurring as when fruit flies have altered their wing shape or eye color after 20 generations!

Once more, the key aspect that shows micro-evolution is real evolution is the fact that gene frequencies are observed to change (along with the fitness) as time goes on. Thus, it is not simply like "breeding cattle" or different species of dogs (for which many varieties may actually see the gene frequency alter in negative directions, with fitness reduced).

Not at all. As I noted earlier, in an earlier blog (citing Richard Dawkins):

the term “random” is often misused in conjunction with natural selection. As Dawkins has noted:

“Thus, what natural selection does is to consolidate particular random mutations into a more stable, adaptive adjustment – governed by deterministic factors and inputs. Thus, that while the selected trait often appears at random, its preservation in the gene structure cannot be relegated to randomness”


In other words, natural selection is not “random” nor does it operate by “chance”. What happens is that once a particular mutation is stabilized, then natural selection preserves the gains and eradicates the mistakes (to enhance better adaptation). Meanwhile, "chance" would be like me sitting a monkey down in front of a type writer or computer keyboard and hoping there is some "chance" it will type out at least one page of coherent script. But since a monkey will likely not recognize any key - or even if it does, then make a connection to words, or how to compose them into articulated thoughts - this isn't likely. It all rests on CHANCE!

Meanwhile, natural selection rests on preferred steps each of which consolidate former steps while advancing the adaptation. Thus, the eye evolved from a single light sensitive spot in a cell to the complex organ we behold today not by chance but rather by thousands of intermediate steps – each preserved because they assured better adaptation if incorporated, and hence a better eye. Many of these steps can still be observed today in simpler organisms.
Posted by Copernicus at 8:35 AM