A Global Plutonomy: Can the World Afford It? 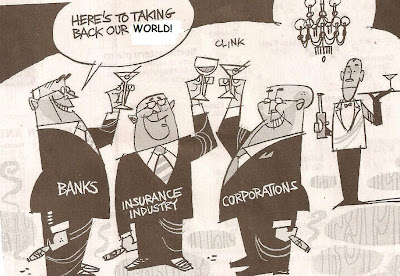 "Like feudal lords, the stateless corporations will make alliances with one another or launch raids against one another's stake. They will play weakening national governments off against each other..... In that event, vast throngs of citizens are reduced to a political position resembling that of the serfs.... " -- William Grieder, in 'Who Will Tell The People-The Betrayal of American Democracy',


In an earlier blog, I sounded an alert about the spiking prices in essential commodities, namely cereals, iron ore and oil:

I noted therein that we currently need not one but one and one half EARTHS to sustain our current rate of consumption. This means it requires on average 1.5 years for the Earth to regenerate the resources humanity uses in one year! Thus, even if the estimate is high- with current growth rates we'll soon reach the actual limits defined and dictated by this number - which means a tipping point and crash. My argument here is that this spike in critical commodities - contrary to the economic pro-growth mongers- is telling us we need to halt or reduce our growth or we'll all be for the high jump.

But while we may tell people to curb their consumption or baby production, another group seems to be growing like a cancer, and at the expense of everyone of lesser means. This is a trans-national group of billionaires, who recently met in St. Barts (sailing in on their individual 300'- 600' luxury yachts) to discuss how they can keep their winnings and make even more.

Thanks to Atlantic writer, Chrystia Freeland, this group's gig has now been exposed, see e.g.

"This widening gap between the rich and non-rich has been evident for years. In a 2005 report to investors, for instance, three analysts at Citigroup advised that “the World is dividing into two blocs—the Plutonomy and the rest”:

In a plutonomy there is no such animal as “the U.S. consumer” or “the UK consumer”, or indeed the “Russian consumer”. There are rich consumers, few in number, but disproportionate in the gigantic slice of income and consumption they take. There are the rest, the “non-rich”, the multitudinous many, but only accounting for surprisingly small bites of the national pie.

More worrisome, the very fact that American, Russian, German, Chinese, Nigerian and other covert billionaire potentates can hobnob at will anywhere they choose makes the ordinary citizen wonder what's next for him. After all, if these guys can deal across national boundaries and meet in secret, it isn't likely to be about the weather or the lovely plumage of the birdies on St. Barts. It's more likely to be how they can amass more wealth, which for a zero-sum planet must come at the expense of the rest of us.

Can these characters even be controlled? And how did they get SO wealthy anyway?

The answer isn't mysterious or magical. It's actually quite prosaic. These guys have managed to lay in the resources in their respective nations to come out on top by having legislators enact favorable tax codes that re-distribute wealth to them instead of the other way around. They then use that additional wealth to speculate in commodities, futures or hedge funds - and also to buy off politicians and leaders - via campaign contributions. In other areas, these guys (like the Koch brothers) create supposedly popular movements - like the "Tea Party"- to act as useful idiots to carry grist to their wealthy mills.

They actually use those movements to entice the slow of brain to believe that tax cutting is good, never mind it deprives a nation of the basis by which to preserve its own general welfare and security.

Look at the American tycoons' success at getting this latest tax cut extension passed. They are delirious, these top 0.1%, that they'll now be getting an extra $1.2 million a year to play with while Georgie Porgie over in his two-bedroom bungalow in Akron, Ohio will likely get barely $1500. And down the road may have to see his Social Security and Medicare sliced because of his myopic choices for tax cuts.

But this idiotic meme keeps driving most Americans to sign on to this stupidity, and continue to vote against their own interests. Recall the Financial Times Analysis (9/15, p. 24) of the effects of extending the Bush tax cuts, as they noted:

“The 2000s- that is the period immediately following the Bush tax cuts – were the weakest decade in U.S. postwar history for real, non-residential capital investment. Not only were the 2000s by far the weakest period but the tax cuts did not even curtail the secular slowdown in the growth of business structures. Rather the slowdown accelerated to a full decline”


Contrast this with the hike in taxes immediately after Bill Clinton took office, leading to the accumulation of more than $600 billion in surpluses by the time he left office, and the creation of 20 million jobs. Is it any wonder then that most plutocrats didn't really start to take off in their accumulation of wealth until 2005 or so?

But how did so many wealthy Russians, Nigerians, Icelanders etc. also come to be? Recall the FT also found: “an increasing proportion of the benefits of U.S. monetary and fiscal policy ...leaking outside the U.S.”

The FT analysis went on to note that the tacit assumption of U.S. policy makers and taxpayers is that the U.S. is a “closed economic system” but in fact, it isn’t. Whatever consequences accrue can often be exploited in ways unseen. Indeed, the FT notes that the Bush tax cuts actually encouraged “capital flight from the U.S.”

And who do you think were the beneficiaries? Other, foreign plutocrats!

Part of this, of course, had to do with the weak dollar policy the Bush administration also resorted to at the time. For those unaware, the Bushies dealt with the exploding trade deficits by allowing the dollar’s value to sink (it was debased more than 35% during the eight Bush years). Because the lower dollar value made U.S. goods-exports cheaper it enhanced U.S. trade activity and narrowed the import deficits. The problem is that it was done at great cost, spurring an investor run to stronger currencies (like the euro). Thus, it also encouraged much speculation in the so called "carry trade". (Which I invite interested readers to google)

The recent tax cut extension boondoggle sets the Plutocrats overseas up for even more easy pickins', as it impoverishes the U.S. domestic landscape and disables the capacity to do even simple things like revamping our crumbling infrastructure. Worse, it addes nearly $900 billion to the deficit which these tyrants....errrr...tycoons, like Peter G. Peterson, will exploit to shout even more loudly about the need to "cut entitlements" to pare the deficit down. (While they demand a likely extension of the Bush tax cuts again in 2012).

And people wonder why the U.S. is rushing headlong into a period of momentous, and probably permanent, decline. A condition that won't make for too many happy campers. These plutocrats might do well to heed Ms. Freeland's words:

"But if the plutocrats’ opposition to increases in their taxes and tighter regulation of their economic activities is understandable, it is also a mistake. The real threat facing the super-elite, at home and abroad, isn’t modestly higher taxes, but rather the possibility that inchoate public rage could cohere into a more concrete populist agenda—that, for instance, middle-class Americans could conclude that the world economy isn’t working for them and decide that protectionism or truly punitive taxation is preferable to incremental measures such as the eventual repeal of the upper-bracket Bush tax cuts"
Posted by Copernicus at 10:36 AM