The 'Big Dog' Opens a Can of 'Whup Ass' on Repukes 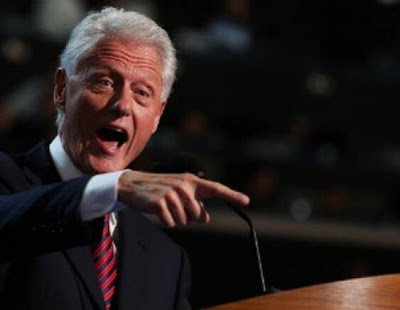 Watching Bill Clinton at the Democratic National Convention (not 'DNC' - which is the official acronymn for the Democratic National Committee) was akin to watching a political maestro at work. This is the cat that the Repukes with all their disgusting malicious intent couldn't destroy through five years of trying, and finally had to use a trumped up charge of lying over a blow job to get him impeached.

People forget, or appear to have short memories, concerning the fact that the vile 'pukes were originally after him for some land deal (now known as 'Whitewater') in Arkansas. When they fell flat on that (three inquiries found insufficient evidence to prosecute) the Reep-fuckers went snooping into his personal affairs. They suspected sexual contact with an intern named Monica Lewinsky, but had to get the goods to nail Bill- possibly based on lying about it. They used a little nobody dimwit third or fourth level lackey go-fer at the Pentagon named Linda Tripp - then living in the D.C. burbs, in a planned community called Columbia, Maryland - actually where I used to live (until 2000).

Then a NY Reep media mole (associated with Alfred Regnery and the Regnery press) named Lucianne Goldberg, who knew Tripp was friends with Lewinsky, got Tripp to surreptitiously record a phone call with Monica ....concerning her sexual contacts with Bill. Tripp recorded everything - never saying a word to Lewinsky. After the case broke, and Ken Starr emerged as "special prosecutor" no one believed it would go anywhere, since Starr would have to use illegally obtained evidence.

Everyone in Maryland - evidently with the exception of Linda Tripp - knew it was a felony to wiretap someone on the phone, during a conversation, without the person's consent. But lo and behold, the rule of law was left behind as Starr and his gang used this unlawful wiretap evidence to go after Clinton for 'perjury'.

Many more of the details of all this were exposed in the Newsweek article ('The Right Wing Web', February 22, 1999, p.34) , that noted the 'friendship' between Lucianne Goldberg and Al Regnery and a number of events deriving therefrom.

The amazing thing is that, despite the vicious and criminal efforts to destroy Bill Clinton by impeachment, he is still a political rock star, and opened up a major can of 'whup ass' on the repugs last night. This was mighty payback after Romney, Ryan and other GOOPers attempted to recruit Clinton's presidency into their arguments that Obama was the true extremist. ("Well, we could always work well with Bill Clinton")

Bill Clinton, after flashing his trademark 'aw shucks' smile then proceeded to blister the Goopers’ butts and pulverize the myths of Romney –Ryan to a pulp, especially noting why he succeeded economically in his two terms, ARITHMETIC! Romney and Ryan want to have no revenue coming in, even as they make massive spending cuts – mainly to programs for the poorest, including seniors - but double down on the Bush tax cuts and military spending. In the latter case adding $2 trillion to the Pentagon budget that the Pentagon asserted it doesn’t even need!

As Bill put it, we can't let these bozos "double down on trickle down".

On the other Big Lie employed by the Romney-Ryan campaign, that Obama planned to "rob Medicare" of $716 b to pay for Obamacare, Clinton said, “When Congressman Ryan looked into that TV camera and attacked President Obama’s Medicare savings as 'the biggest, coldest power play,' I did not know whether to laugh or cry.” He noted that the Ryan plan "dollar for dollar featured the same cuts" – adding, “it takes some brass to attack a guy for doing what you did.”

Trouble is, Ryan has no "brass" (i.e. balls) only lies! He can't even admit his budget is fully fraudulent because it does nothing, NADA to actually manifest cut or even slow deficits in the near future. While he makes vicious spending cuts to Medicaid and food stamps, he allows the Pentagon budget to bloat by $2 trillion and tax cuts for the wealthy shits, adding up to $4 trillion in Romney's first term.

Meanwhile many of the working class folks who are pro-Romney to a tee, haven't yet figured out they are the ones who will be clobbered to pay for those rich guy tax cuts. Clinton in his speech estimated $2,000 additional taxes each - to come as a result of repeal of the child (dependent) deduction, and home mortgage deduction.

Clinton didn't stop there, but laid out the stark divide between what these Republican Robber Barons have planned and the sane and rational world of Obama. To quote Bill:

“If you want a 'you're on your own, winner take all society' you should support the Republican ticket,” he said. But “if you want a country of shared opportunities and shared responsibilities – a 'we're all in it together' society, you should vote for Barack Obama and Joe Biden.”

Bingo! And I already showed two blogs ago the Social Darwinist basis of the Romney-Ryan plans. How can any sensible working man or woman even think of voting for these characters? A re they really that hot up to subsidize rich guys? Or wait! Maybe, despite the odds against it, they may actually believe they will be rich like Romney too - with over $400m stashed in tax -avoidance accounts in Swiss banks and the Caymans.

To his credit, Bill also placed the blame for the 'incivility' that has marked this campaign squarely where it belongs: on the Republican party, with half of its base believing that the president of the United States was born overseas (and a good number who believe he was born here but is nonetheless “un-American”). The other half of morons still think he's a "Muslim" or "Socialist" when he's the furthest thing from it.

Me, I am a socialist! I've been a member of the Democratic Socialists for over seven years. Like Einstein, in his essay 'Why Socialism?', I believe it's the only system that ensures all citizens can get any kind of equitable break ....apart from the Capitalist-Neoliberal rigged market dominion system that Elizabeth Warren spelled out last night.

I know who makes the cut as a socialist, and believe me, Obama doesn't. (A real socialist for instance wouldn't have remotely set up a "deficit commission" to even THINK of cutting Social Security or Medicare. A REAL Socialist also would have pulled out of Afghanistan ages ago, instead of tossing more good money after bad when we have urgent domestic needs.)

Moving on, Clinton made one spot on observation that caught my attention and which potential voters need to process. Clinton said:

"in Tampa, the Republican argument against the president's re-election was actually pretty simple, pretty snappy. It went something like this: 'We left him a total mess, he hasn't finished cleaning it up yet, so fire him and put us back in.'"

Well put, and very well summarized. The odious basis for Republicans in a nutshell. The fact is these miscreants haven't earned power! They didn't in the past four years and until they do they need to remain in the political wilderness. A real one! Not only deprived of the White House, but reduced to tiny margins in both House and Senate!

Bill Clinton's whole fine effort may have been one giant step in that direction!