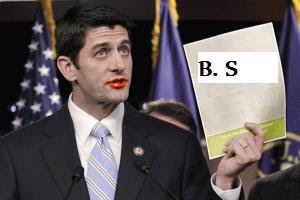 OOPS! He Must have smooched Ayn Rand! Or maybe her corpse!

Guys like Paul Ryan, now hailed as some kind of great thinker and leading light by the Reeps, have always been a dime a dozen. You most often see their kind on college campuses bloviating to their small groups of faithful, and usually extolling the virtues of deranged icons like Ayn Rand. (Ryan himself even admitted giving copies of Rand's novel, 'Atlas Shrugged' to his staff as a Christmas present, as reported in TIIME, Sept. 3rd, p. 36. One wonders what his staffers ever did with those copies. )

But now that he's in the spotlight - it's not even for telling eight straight lies in his convention speech about Obama. No it's about his Rand worship and claims to also follow St. Thomas Aqinas. Now that this much has come out, others are taking him seriously and fact checking.

When several Catholic groups, including nuns from the Leadership Conference for Women Religious, pointed out that Ayn Rand had nothing but contempt for religious faith, i.e. asserting 'The Virtue of Selfishness'', p. 38):


"Faith is a malignancy that no system can tolerate with impunity, and the man who succumbs to it, will call on it in precisely those issues where he needs reason the most. "

Which, of course, is bollocks. Her philosophy is called Objectivism and reduced to its basic message, devoid of bilge and baloney, comes down to people - when developing a self-sufficient economics - for example, relying only on objective evidence. Hence, faith or belief plays no role. Moreover, it's an extreme economics that issues from it, pivoting primarily on national and individual self-sufficiency.

Hell, as I noted in a blog last month, Rand in her pristine Objectivism doesn't even accept the military ought to be funded from the taxpayer's purse! Her solution (On Government Financing in a Free Society, p. 116) is for the Pentagon, law courts, police, firemen and others (who are fed off the taxpayer dime) to instead set up co-op insurance companies! In this way, she observes that: "Men would voluntarily pay for insurance protecting their contracts." She also allows for the military to use "lotteries" to get their money, though I can't think of a single person who'd wish to buy one of these tickets. I mean, what is the prize? One of the F-17 Stealth fighters that loses cloaking ability when it rains?

Meanwhile, Paul Ryan - while he plans to chop up Medicare, Social Security and Medicaid, plans to use the money saved by going after "entitlements" to increase funding for the military. But this is EXACTLY the sort of "violence" (by taxes) Rand warned against!

As for the atheist part, while Rand was indeed a self-proclaimed atheist, her philosophy itself shares zero commonalities with atheism. For example, NO atheist I know insists we each become islands unto ourselves and pursue our own rational self-interest, even to the extent of weighing the value of another before even considering saving their life! (Virtue Of Selfishness', p. 45) Neither do any atheists I know demand the government be reduced to a mere onlooker in terms of governance, and let armies, police, citizens etc. set up "insurance" companies to get their funding, or lottos!

So, what Paul Ryan is really really saying in his denial, is that he loves Rand's gratuitous, selfish, anti-government economics but isn't buying the essential philosophy from which it's forged. Can we then agree this guy is trying to square the circle? Can we also agree he's full of shit? Especially when he himself doesn't even adhere to Rand's basic, enunciated economic principles in terms of "government funding in a free society"?

But the biggest howler and which petard is almost as large as the first he's hoisted on, is when he claims to be "following Saint Thomas Aquinas". (TIME, op. cit. p. 56). He claims (ibid.) he bases this on the fact that abortion is outlawed by the Church, and was by Aquinas, and hence legitimately he can oppose any abortion even if a 12 year old kid is raped by her uncle, or a young college woman is gang-raped by frat boys.

Maybe this joker needs to do a tad more reading, such as learning that a leading Church historian, John Connery, S.J. has documented that up to 1869 the Church permitted abortion, up the end of the first trimester! (See, e.g. Carl Sagan and Anne Druyan , PARADE, April 22, 1990 ) Clearly, the fact the Church already changed its doctrine on abortion shows it can do so again. And hence, one must question whether either of its positions (before and after 1869) embodies any kind of "absolute moral" position.

“..no one, neither Vatican I, nor Vatican II, nor the textbook theologians, has shown that the Church - its leadership or its theology - is able to put forward propositions which inherently cannot be erroneous."

This makes sense, and is something I've always challenged Catholic padres on when I've debated them. The problem confronting all doctrinal absolutists is that their cognitive reach exceeds their grasp and they become hoist on their own petards. As the illustrious Ryan does on one big petard when he backed House bills dignifying the term "forcibible rape" and "non-forcible rape".

"It is impossible to honestly deny objective errors committed by the Church's teaching office, both ordinary and extraordinary."

So why then are Catholics adhering to their Church's stupid, archaic rules so slavishly? Maybe because they've done it so long they no longer have the power to think for themselves. Or.....maybe they still buy into the "Hell" crappola, when the padres and Bishops (who never play when THEY are molesting altar boys or protecting the molesters) never play that card for their own misdeeds.

Ryan also claims- with a straight fact- this his "mission to reduce debt" issues from the Holy Father himself, Pope Benedict, who has charged that "governments and communities running up high debt levels are living at the expense of future generations."

That Ryan would cite a pope to justify his vicious budget is astounding, not to mention highlighting his own chutzpah! Because the truth is the CBO, Center for Tax Policy, and other budgetary cognoscenti have determined his own "Ryan budget' is nowhere near neutral in cuts and spending. While he makes brutal cuts to the social service programs (that most Catholics have always supported), such as food stamps, Medicaid - sending tens of millions into a limbo without health care, or enough food, he allows and enables $4.8 trillion in tax cuts for the 1%, and at least as much for the Pentagon's war profiteers. Most economists, e.g. Paul Krugman, estimate this will add at least an additional $7 trillion or so to the deficit. In other words, Ryan is actually INCREASING the debt as he demolishes social programs!

The man ought to be ashamed of himself, but after witnessing the bevy of lies he unloaded two nights ago, I believe he's totally shameless.

One thing we cannot do is let this lying scumball anywhere near the levers of power to try to implement his half-Rand, half-Aquinas bullshit agenda.