The Longest Day...And Then Some... 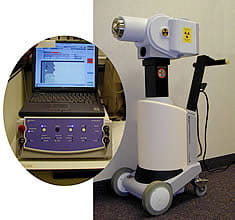 Shown here: A remote brachytherapy afterloader of the type that delivered my cancer radiation treatment last Tuesday. It's an electro-mechanical system by which 16 transfer tubes are inserted into catheters in a fixed template (stitched to the perineum) to deliver radiation directly to the prostate gland. I received a total dose of 1930 cGy (centigray), with bladder-rectal sparing contours, i.e. at 90 percent of the full dose..

The "longest day" - September 25th - last Tuesday, started for me at 8:05 a.m. in the Admissions Office of the Helen Diller Cancer Center at the University of California San Francisco (UCSF). There I had to complete yet another batch of forms, including consent forms for the scheduled surgery some two hours later. The form completion phase over (at least for now), I'm then directed to Room 309 where I'm greeted by an RN and told to remove all street clothes and get into a hospital gown, cap and 'booties'. My wife is there to help me - including making sure to bag everything for later recovery. Shoes and socks in one bag, clothing - shirts, sweaters, coats in another and belongings (including eyeglasses) in a small bag to be kept with the clothes.

All that finished, I have to assume my role as "cancer patient" and get into the prepared bed, where I am met by a series of nurses, the anesthesiologist (actually a young resident) and one of the oncology resident drs. Of course, even more forms must be filled out, pretty much asking the same questions: Any allergies? What is your medical history? Family history? Recent medical issues? Prescription pills? Etc.

By now it's almost 9.45 a.m. when the anesthesiology resident and oncology assistant enter. They need to know my selected method of anaesthesia, and the oncology resident tries to convince me to "just go under", i.e. general anaesthesia, but I told her 'No way!' I prefer to remain awake to see what's going on. I also convey this to the anesthesiologist who says she will use an epidural administered via spinal block, combined with some sedation administered intravenously.

That settled, I am whisked away on the modified gurney to the OR where the anesthesia is to be administered. This is a teaching hospital, of course, and one of the consent forms I signed acknowledged this and also the use and practice of residents, and becoming part of the teaching routine or model. I had no problem with this, firmly believing that no 'bozos' would have made it here or lasted long enough to do a number on me.

Alas, the anesthesia delivery by epidural took longer than usual because the young resident dr. had a difficult time placing the block (delivered via catheter) on my spine. She was therefore assisted by her superior and after some five "sticks" managed to find the 'sweet spot' - the place where maximum comfort and pain relief could be delivered to me, the patient, and with minimal spinal fluid lost or god forbid, spinal disc puncture leading to delirium or dura puncture resulting in severe headaches. (Often worse than migraines and which can last up to 6 months in a worst case scenario).

This is now 20 minutes after entering the OR, and it's delayed the next in line for treatment. Anyway, after some sensory tests using ice cubes and pressure, I am deemed ready to go for the template surgery. My legs are raised into what's called the lithotomy position, and a Foley catheter is inserted into the urethra since there is no other way I can urinate. An ultrasound probe then is placed into the rectum for imaging purposes, at least initial imagery which will later be refined by Catscan. Meanwhile, the oncology surgeon - Dr. Hsu - begins to suture the template onto the perineum using 8" long fine needles inserted through holes in a custom made template, and into the prostate gland. The idea here is to hold the needle positions in place, then insert hollow plastic catheters, through which the source transfer tubes will be threaded later.

The whole operation takes about an hour including checks on imaging of the needles in relation to the prostate, the bladder, the rectum and urethra. At various points I am asked by the attending anesthesiology resident if I am ok, or feel any kind of pain or discomfort. The answer at every point is 'No'.

The operation concluded, I am then wheeled into the Recovery Room upstairs where I am given some water through a straw to drink but not too much, to avoid barfing because of the effects of the epidural (your stomach - at least the bottom region has no sensation either).

After an hour I am taken down to the basement for the Catscan. This takes about 25 mins. and it's now nearly 2.15 p.m. Still to come is the Treatment Room and so I am next taken over there and must wait while the Catscan imagery is processed and integrated with the ultrasound imagery to develop a treatment plan. This takes nearly an hour, and includes the placement and checking of the transfer tubes for each hole in the template. This is critical because each transfer tube will deliver a specific dose for a given "dwell time" - entering the prostate, administering the radiation from the Ir 192, then leaving. I am told that once the actual treatment commences it ought to take 20 minutes.

The longest wait is for the final contouring to be done by Dr. Hsu, but he is held up in another operation, again triggered by the initial delay with my anesthesia. By now it's 4.45 p.m. and I am really getting antsy -also hungry (having been fasting since 6 p.m. the previous day) - while waiting on the treatment bed in the Treatment Room. The prolonged positioning is fairly uncomfortable and I end up getting a combo kink-spasm under the left shoulder blade (it's still aggravating me).  In addition, the epidural has started to wear off and I am starting to feel the Foley catheter in my urethra. However, I am loathe to take more pain medication or epidural because it might mean having to stay the night in the hospital when I am told I can leave if I am able to urinate. Also, I am starving hungry and if I get more epidural I might not be able to eat ....and that can't work. So I tough it out.

Finally, at 5:10 p.m. the contouring is completed, and the transfer tubes checked one last time before the outer door is secured and shut and all the personnel exit to avoid radiation exposure. The oncologists monitor me while I receive the treatment, and I listen to my Apple ipod. Before I know it the Treatment Room doors swing open and I am being wheeled to a waiting hospital room at Mt. Zion (the affiliate hospital) on the 4th floor.

The gurney isn't large enough to wheel me all the way in, so I have to see about walking to the waiting bed. I stumble because one leg (the left) is gimpy and still partially numb. I do make it to the bed with some help from an RN and wifey. She then knows what her first job is: to get a large sirloin burger for me at the downstairs cafeteria. She returns in 10 mins but with a large salami sandwich and diet coke - the burger station closed a half hour earlier. Never mind! What she brought was vastly superior to the hospital tray served up some twenty minutes later, consisting of a vile pea puree, a chicken breast that could have been anything, and a macaroni serving that was totally tasteless. At least the soup was ok and I had that.

After 25 minutes in the room, I had to urinate, but it was painful - extremely so- and mostly blood. The RN told me that when the ratio of blood to actual urine reached at least 50% I could leave. Ten minutes later, back again, and less blood this time. Finally, some 30 minutes later (it's now 7:15 pm.) and it's all clear.

Given the all clear I am discharged by 7:40 p.m. and we were elated as we got to spend the night in our own hotel room downtown, as opposed to being cooped up in a hospital with IV tubes hanging out.

This is now nearly 5 1/2 days later and the after effects are still around and I am told they might get a bit worse, mainly burning urine, and urine retention. I will ride it out and hope for the best, and ....if the kink-spasm in the shoulder doesn't abate in another two days...probably break down and go for a massage at my wife's massage therapist. All in all, I consider myself lucky.  Lucky to have received a treatment many others can only dream about and at the hands of some of the best cancer treatment specialists in the nation.

Here are kudos to both Dr. Joe Hsu and Physicist Jean Pouliot for his help in preparing the final treatment plan.
Posted by Copernicus at 8:41 AM