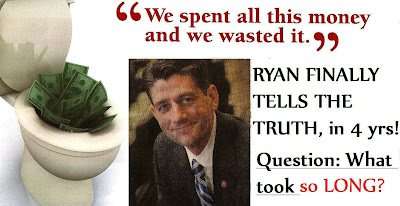 A grammar school nun, Sr. Mary Vivina, that used to teach me in Milwaukee, would often remind the Religion class:

“If you start out by telling small lies, it becomes much easier to tell big lies.”

This could be applied to Paul Ryan, who we now know started out with a small lie, regarding the time for a marathon he once ran. For those who haven’t heard, he bragged he ran 26.2 miles at a blistering pace of “two hours and fifty something”.

The first hint of the lie was not being able to exactly state the time. As anyone who’s ever run any distance race can confirm (I once ran a 5 km race in Alaska) you never ever forget the time, just as you never forget where you were or what you were doing when JFK was assassinated, or 9-11 erupted. It’s emblazoned on the engrams. Former Mass. Governor Mike Dukakis, for example, also ran a marathon (the 1951 Boston marathon) and recalls his time as 3 hours and 31 minutes, placing 57th overall. This is after 60 years!

Now, thanks to ‘Runner’s World’ – the niche magazine that called him out- we know Ryan was a flat out liar on his marathon time. On digging into the Minnesota marathon he ran, the magazine found an official time of 4 hours 1 minute and 25 seconds. In other words, a whopper of a difference from his claimed time.

To me, this is an artificial distinction. Moreover, it makes it more likely if a guy has lied about a race time – and in a big way—he will do so about military decorations, or any other thing, including his policy plans, budget plans and oh yes….the other guy’s too.

In Ryan’s case, even before he arrived in Colorado Springs two days ago for a rally with the local reich wing morons, his primary lie on Obama’s “Medicare cuts” had already been exposed to the cold light of day. As reported in The Colorado Springs Gazette (Sept. 7, p. 1A), not exactly a liberal bastion, the Associated Press had received a text of Ryan’s planned speech and the claim that “Obama stripped $716 billion from Medicare”.

As the Gazette article noted:

“Ryan advocated the same move in the budget he shepherded through the House of Representatives, ‘and the $716 billion change under Obama didn’t affect recipients, but rather reduced payments to hospitals, health insurance plans and other service providers’.”

Not mentioned was that ALL those changes had been agreed to in advance, by all the above. This was part of the deal made with them given the additional millions of participants delivered to them via the Patient Protection and Affordable Care Act. None of this was mentioned by Ryan in the Springs, where he repeated his lie about Obama taking away seniors’ benefits.

No, even to the most dedicated Reep troglydyte, a lie about a marathon time may not mean much, but a lie about Obama taking away his or her benefits should! But to the level of morons that turned out for Ryan in the Springs, it didn’t matter. Even when the Gazette reporter brought the AP fact check and lie expose to light, none of these knot heads believed it.

Another, Gina King - a former dental claims processor - said “it didn’t matter” and she didn’t care. Why?

“He’s good with numbers and tells it like it is!”

Yeppers! He’s real good with fudging numbers and lying! As for 'telling it like it is', kindly pull your head from where the Sun doesn’t shine, lady.

Ironically, this moron admitted she was “on food stamps” – for which access and benefit she really ought to be on bended knee and thanking Obama, because if the Reeps get in and cut that program by one third – as they claim (to pay for their increased tax cuts for the rich) she will be sucking salt. Or maybe sand. And her 'star boy' Ryan will be the one responsible for her kids or herself becoming malnourished.

“I want someone who will help me help myself”.

Really? And you think Paul Ryan is the one? The guy LIES! The guy plans to massacre programs on which you now depend! Do you think you will magically be off those programs once Romney –Ryan are elected? Well, you likely will if they cut them to the degree they say. But jobs? You aren’t going to get any jobs from their policies!

Ongoing job constriction – as a Bill Maher guest pointed out Friday night – has been going on for the past fifty years, starting with de-industrialization, automation and then globalization the past 22 years. Obama didn’t start that! Fuck, he was not even BORN when de-industrialization commenced in the late 50s! How STUPID can people be!

As the guest observed, this is what keeps our national discussion of employment, deficits and future prospects at a childish, uneducated level. Ryan is part of this childish discussion and debate, and feeds the childish, indeed infantile needs of his base as when he makes such remarks as:

“We simply have to stop spending money we don’t have!”

But that’s exactly what HE and Romney plan to do! Spend money they don’t have. They intend to spend $ 4 trillion for tax cuts for the wealthiest (why do you think so many billionaires, like the Kochs, are donating to Romney?) and also add $2 trillion to the Pentagon budget. This total of $6 trillion over one term is NOT balanced by all the cuts they SAY they intend, so that means either:

1) They are lying through their asses, and plan to run up deficits on their terms, or

2) They plan much more massive cuts than they’ve already stated, which means to Social Security as well as Medicare and to current beneficiaries not merely those “under 55”. In this case, they’ve ALSO lied, a massive lie of omission.

But in this alternative universe where lies are truth and truth translates into lies, anything can be believed. Another guy Randy Kroeger, supposedly a “retired engineer from the technology industry” – so one supposedly with an IQ over room temperature, gave three reasons he supports Romney and Ryan. In his words (ibid.):

Yes, it’s to fuck you over, you and the other birdbrains, in the biggest bait and switch ever.

“B, I believe their plan will work!”

Oh, I KNOW it’ll work! Once they implement it and add another $5 trillion to the deficit you will be lucky to have any benefits left.

“C, I’ve followed the shenanigans of the Democrats for years!”

Spoken like a true Ditto head. But the question is, have you followed the “shenanigans” of the Reepos? Evidently not!

At least one attendee, a former Army veteran named David Justice, did see through the haze of lies and bullshit. As he noted (ibid.):

“Ryan’s speech was a pack of lies. It’s overwhelming. He said the president doesn’t reach across the aisle, when he’s bent over backwards to accommodate the Republicans”.

Justice conceded he wasn’t a Reep but attended the meeting “out of curiosity”.

Still, he was amazed at the level of lies spewed out. He shouldn't have been if he's remotely followed Reepo tactics the last few election cycles.

I re-read the account of Ryan's Frolics in the Gazelle, and recalled the words of Sister M. Vivina concerning lies. If you can tell small lies, like exaggerating the time you ran a marathon by more than one fourth, it becomes much easier to tell whoppers later, like about Medicare, Obama, and your own budget!

After all the lies to date, why would anyone believe ANYTHING Ryan says?

No, he didn’t run a marathon in under three hours.

He lied about the GM plant in Janesvile, Wisconsin that was closed while George Bush was still President, in December 2008: but Ryan in his speech at the Republican Convention falsely blamed the closure on President Obama. Now Ryan is wriggling,
trying to claim he didn’t say it (yet another lie).

There’s a reason why Paul Ryan is known as Lyin’ Ryan.

That's a really great monicker, 'Lyin' Ryan'! Will have to remember that one! Thanks!