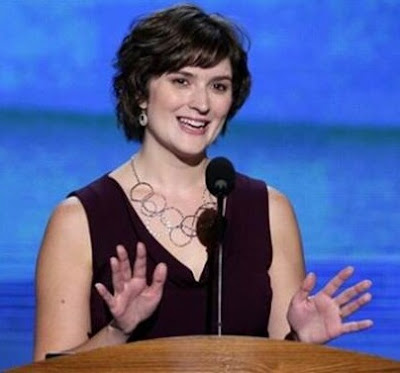 Though her speech last night was short, it was elegant and to the point. In her soft, melliflous voice Ms. Sandra Fluke presented perhaps one of the most powerful cases for voting all Democratic - by showing us the future we confront if the Romney-Ryan Nazis grab power. Indeed, I had to go back to Robert Payne's book, The Life and Death of Adolf Hitler, to see how close Sandra's forecasts were to what the Third Reich actually did. This was particularly in terms of limiting reproductive choice, including outlawing of abortion and all contraception.
Payne also noted that one of the Reich's first steps on ascending to power was to ban all pornography, every last bit. Up until then, the Weimar Republic had produced some of the most varied and diverse material ever seen in Europe or anywhere. But as sex therapist author Betty Dodson noted in her previous book, all authoritarian regimes and especially those prone to butchery, know and understand that porn is amongst the most "transgressive" forms of expression there is. Hence, it had to be rendered verboten.

I already noted in a previous blog how the Romney -Ryan Robber baron gangsters, or "the American First Reich", plan to do the same by wasting a half trillion for a crusade. See, e.g.http://brane-space.blogspot.com/2012/09/hide-your-porn-romney-gop-plan-fierce.html

Sandra Fluke, meanwhile, articulately warned of the ferocious war on women everywhere that will erupt if the Romney Zombies get in. In Sandra's unforgettable words:

"Warnings of that future are not distractions. They’re not imagined. That future could be real."

As she elaborated, making the hair on the back of my neck stand up:

"In that America, your new president could be a man who stands by when a public figure tries to silence a private citizen with hateful slurs. Who won’t stand up to the slurs, or to any of the extreme, bigoted voices in his own party. "

She's referencing the coward rat Romney, who said - after Lush Rimbaugh used vile slurs to describe Sandra, "Those are not exactly the words I'd have used".

Oh really, Rat? What....you'd have used a more "refined" alternative? The coward Romney – as Rachel Maddow noted in a segment 2 weeks ago, also waited at least 36 hours (and after most other repups had weighed in) before offering a negative opinion on Todd Akins “legitimate rape” comment. Only then did the Mormon weasel proclaim it was “objectionable”. What we can conclude is that no such waffling weasel has any business being leader of the country, no matter how loudly his peanut gallery screams for him to do so.

Back to Sandra's stirring warning of a dark, dire future should American voters make the wrong choice:
"It would be an America in which you have a new vice president who co-sponsored a bill that would allow pregnant women to die preventable deaths in our emergency rooms. An America in which states humiliate women by forcing us to endure invasive ultrasounds we don’t want and our doctors say we don’t need. An America in which access to birth control is controlled by people who will never use it; in which politicians redefine rape so survivors are victimized all over again; in which someone decides which domestic violence victims deserve help, and which don’t. We know what this America would look like. In a few short months, it’s the America we could be. But it’s not the America we should be. It’s not who we are."

You're right, Sandra! It is the America we could be in, no longer America but Amerikka - the land dominated by a New Reich. Robber barons who fly the $ sign as opposed to swastikas, but who do the same thing. (In Nazi Germany, as Payne also observed, the second thing the Nazis outlawed was any form of birth control. You had to make babies for the state or face the camps)

Sandra continued, counterpoising the dark future with a much brighter one:

"We’ve also seen another future we could choose. First of all, we’d have the right to choose. It’s an America in which no one can charge us more than men for the exact same health insurance; in which no one can deny us affordable access to the cancer screenings that could save our lives; in which we decide when to start our families. An America in which our president, when he hears a young woman has been verbally attacked, thinks of his daughters—not his delegates or donors—and stands with all women. And strangers come together, reach out and lift her up. And then, instead of trying to silence her, you invite me here—and give me a microphone—to amplify our voice. That’s the difference."

Indeed! This is the America we who are sane want. The future we want, and try to project beyond the vicious efforts of the liars and brigands to deflect it by disinformation. But will it happen? It depends on the outcome on Nov. 6th.

"Over the last six months, I’ve seen what these two futures look like. And six months from now, we’ll all be living in one, or the other. But only one. A country where our president either has our back or turns his back; a country that honors our foremothers by moving us forward, or one that forces our generation to re-fight the battles they already won; a country where we mean it when we talk about personal freedom, or one where that freedom doesn’t apply to our bodies and our voices."

Well put. If in fact parallel universes exist, it is perhaps indisputable that in one of them the future portended by Mitt Romney and his Robber Barons and antisexual goons will materialize. The future of tens of millions of kids in rags, begging for food on street corners, as their parents have food stamps and their Medicaid cut. Meanwhile, rich buggers get double their old Bush tax cuts. And the military is fueled with $2 trillion in order to start a new war with Iran.

But in another parallel universe, Obama and Joe Biden are re-elected. Steps are taken to continue to improve the job situation, even as more resources are brought to bear. By 2014 Obama's Patient Protection and Affordable Care Act is in full swing with millions added, children no longer denied care because of pre-existing conditions, and seniors not having to choose between food and meds owing to the 'donut hole'. At the same time, 22 million more people now have health coverage they lacked before.

Which parallel universe will ours track into by the end of November 6th? We had better hope it's the latter!