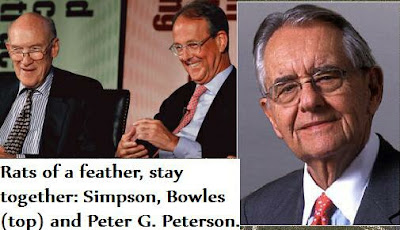 The WaPo’s Ruth Marcus, in a recent column, posed several “mock debate” questions for Barack Obama, obviously trying her best to be too clever by half. But this Neoliberal denizen of the corpora-media merely came away appearing half clever. The two ‘questions’ I will focus on concern Obama’s “deficit commission” and the Ryan-Romney Medicare voucher system.

Let’s then cut to the chase with Marcus’ first question:`

“President Obama, you have been criticized for not supporting the recommendations of your own fiscal commission. Why didn’t you? Do you regret that choice?”

I am certain he does on further investigation!

The “recommendations” Marcus is referring to are actually private proposals put forward by Alan Simpson and Erskine Bowles, the co-chairs of the Simpson-Bowles Commission. Those proposals would cut Social Security through a variety of means, would cap the Medicare budget (which is effectively the same as cutting it), and - once you cut through all the doubletalk - would actually cut tax rates for corporations and the wealthiest Americans, while raising them dramatically for everyone else.

Apart from the negative economic justice aspects, which play to a Neoliberal market imperative, there is the underlying rot and corruption of the persons, networks, groups behind it – which (based on Michelle Obama’s convention speech) I cannot believe Barack knew about before he appointed this duo.

Simpson is a former Republican Senator who (during the budget impasse in 2010-11) also insulted the Social security program and those on it, once referring to it as “310 million teats” – implying those dependent on it are moochers or slouches, n’er do wells. Simpson never ought to have been appointed to ANY commission, including oversight of hog farms.

Meanwhile Ernest Bowles is an ex-Democratic staffer and Morgan Stanley Director. In addition, a champion of the Neoliberal ethic that people ought not be dependent on “entitlements” but earn their keep via their own hard work or investment acumen. In any case, citizens are expected to rely wholeheartedly on personal initiative and industry not government “handouts” (Despite the fact, as noted in the latest TIME – ‘One Nation Subsidized’ – 99% of the country already depends on such “handouts”)

More to the point regarding incipient corruption, both Simpson and Bowles are longtime allies of conservative hedge fund billionaire and former Nixon Cabinet member Peter G. Peterson, a long-time adversary of Social Security, Medicare, and government's rightful role in our society. Peterson-funded organizations provided staffers, as well as ideological guidance, to the Simpson Bowles Commission.

This alone, had Obama known of their background, ought to have led him to quash it one time and either initiate a re-do or put it aside altogether (I favored the latter)

Those staffers worked under the direction of David Walker, who was CEO of the Peter G. Peterson Foundation until he left to lead an affiliated Peterson organization called “The Comeback America Initiative”. Who is David Walker? He's a former Comptroller General of the United States, a longtime Peterson operative, and a featured figure in the rabidly anti-Obama film (“Obama’s America”), just released by Dinesh D'Souza, the far-right apparatchik whose attack book against the President was hilariously entitled The Roots of Obama's Rage.

Worse, Walker is given five minutes or so in the dastardly movie, wherein he disses the leader who allowed Walker's own staffers to affix the Presidential seal to their own work! Some fucking gratitude!

In other words, NONE of the primary subjects involved in the Simpson-Bowles commission have the nation’s interests at heart, certainly not the Middle Class interests! This is another reason I winced on watching Biden’s and Obama’s convention speeches and references to this commission – as if conferring some bipartisan reasonable patina. No, it was a major mistake. Fortunately, it didn’t matter at the time, since most viewers were not remotely aware of the background of the players in the commission.

But this is a big reason it’s advisable for no Democratic candidate to mention it any more, lest the background and connections to the anti-Obama filth and muckrakers be exposed, as well as the base objectives of the Peterson group. This is also why I’m convinced Obama appointed his commission without realizing the background and why he MUST disown it now, he must “abort” it as an infant mutant that cannot be allowed to survive.

The Peterson network is determined to foment hysteria about something that is not our most urgent economic problem. As Joe Firestone notes, government spending (as a percentage of GDP) has been higher in this country at other points in history, and many economically healthy countries spend more.

Her next question is equally lame:

“President Obama, you have denounced Gov. Romney’s Medicare plan for putting too much risk on seniors. But isn’t the idea of providing subsidies, adjusted for health status and income, to let individuals purchase insurance on well-regulated exchanges, just like Obamacare, except with a public option in the form of letting seniors buy into traditional Medicare?”

What Marcus refers to as Romney’s “subsidies” are really vouchers. They represent a limited amount of money allocated each senior and for which he is responsible for getting his own insurance. There is NO assurance, however, that any senior will be accepted by a private insurance plan and in fact there’s no mandate for any private insurance company to do so. This is how the Obama plan for medical exchanges differs from Romney’s. On Obama’s exchanges as spelled out in the Patient Protection and Affordable Care Act, any person will ultimately get insurance. On Romney’s exchanges, no similar guarantee is offered. As a senior you may, or may not be accepted.

As for what Marcus calls Romney’s “public option” (i.e. to remain on traditional Medicare) this would not be the same as using traditional Medicare (as opposed to Medicare Advantage) under Obama. Let’s also bear in mind this “option” was only added after D-Ron Wyden (OR) suggested it, whereupon it mutated to the “Ryan-Wyden plan” but there’s no assurance it’ll be retained if Romney and Ryan are elected. Why keep a “half Dem” plan?

Even if it is retained, seniors will be at a disadvantage because as hundreds of billions worth of vouchers for the private plans are doled out, traditional Medicare will be weakened. This is given that the voucher money (which would ordinarily have gone to support Medicare) is now funneled into “private premium support”. Thus, it will become insolvent even more rapidly and force major cuts in the benefits now provided for. These cuts will most likely arise by eliminating a spectrum of procedures currently covered under Medicare (at least at the 80% co-share rate), including cardiac stents, hip replacements and prostate cancer treatments. Also look for beneficiaries to have to pay for all the preventive services now covered under the Affordable Care Act, including: colonoscopies, mammograms, PSA tests, prostate biopsies etc.

To believe that Romney’s vouchers and Obama’s health plan as it applies to Medicare are anywhere close to being the same is to be totally deluded. But then delusion is the alternate reality within which the Neolibs operate. Look at the mythical "fiscal cliff" , for example, which they've now blown into some nefarious monster resembling an economic Kraken!
Posted by Copernicus at 9:50 AM