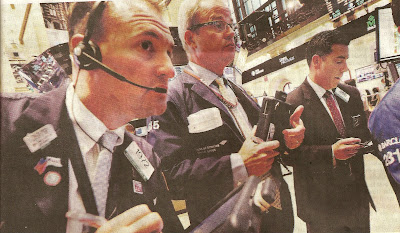 The Federal Reserve has embarked on yet another financial foray to attempt to juice the economy, in this case, into spurring employment. It has adopted an open-ended policy (as contrasted with its previous fixed term quantitative easing) of purchasing mortgage-backed securities, roughly $40b per month, to further push down long term interest rates. Economist and fed monitors suggest Bernanke and Co. are aiming for a "7% unemployment rate."

Well, 'Gentle Ben' may have his heart in the right place, but not his policy. That policy, to be sure, assists only a tiny coterie of the populace, mainly Wall Street stock holders and speculators, and home buyers.

According to Paul Dickey, president of INS Capital Management in Denver (The Denver Post, Sept. 15, p. 12A):

Indeed, in the wake of Bernanke's announcement the Dow posted its 4th straight day of gains, finishing at close to 13, 593.37 a five year high. This is monumental for stock watchers and 401k holders, and as ABC News displayed two nights ago, a 401k portfolio with $100,000 in it ca. 2008, would now - all things being equal- be up to $208,000. For this reason the nattering nabobs who focus on unemployment rate in relation to this election (i.e. no president has ever been re-elected with a rate over 7%) need to appraise themselves of the OTHER election stat: That at no time in the history of this Republic, and going back over 150 yrs., has an incumbent lost when the Stock market posted major highs of 10% or more! In other words, by THIS reckoning Obama is in very good shape. People - voters will look at their 401k gains and say 'Pfaww! Fuggit unemployment stats! I'm votin' the guy for whom the market is in uptick mode!"

Well, there is a downside, and that is one must be cognizant of a speculative bubble. We saw this story unfold before when the Fed - under Greenspan - held interest rates way too low from 2003 to 2005, thereby setting the stage for the meltdown and financial implosion that followed. The abundance of cheap money fueled the creation of high risk derivatives by quants, mainly burrowed deeply into collateral debt obligations or CDOs. The bonds created were than mislabeled AAA when they actually carried 'junk' - in the credit default swaps buried within - and should have been no higher than AA, if that.

Investors then bought up these triple -A bonds in good faith, while the low interest rates fed the housing bubble as people who ordinarily wouldn't bave bought homes stuck their necks out - and alas were taken in by unscrupulous sub-prime lenders. When that housing bubble burst it then led to the freezing of the credit markets, banks halting lending, businesses unable to get loans for payroll shuttering their doors, and millions then laid off. We ended up with the worst recession and marginal depression, since 1930-31.

The workers owning 401ks are the ones that got shellacked with nearly $5 trillion of American wealth estimated lost. In other words, that increase in 401k balance since 2008 has barely brought 401k owners past the break even point. The ones who escaped, or more accurately escaped the most pain, were the wealthiest stock owners for whom the losses were no great worry. Their nest eggs didn't depend on their investments, in other words. It is estimated that 75% of all stock owners, investors fall in this category.

These are precisely the ones that will be most helped by Bernanke and the Fed's new policy. The 401k owners, workers, again - are the ones most likely to feel the hurt if the bubble bursts again.

As one Boulder, CO management banker put it (ibid.):

"The Great Recession crushed household balance sheets and assets must rise in value for the economy to grow and survive the inevitable fiscal discipline ahead."

Meanwhile, the other beneficiaries of Bernanke's new juicing policy are those who can borrow money at low rates and invest in inflating assets. Alas, these comprise a tiny segment of the population.

So, between the two 2 or 3% wealthy invested in stocks, and the low interest rate borrowers, perhaps 5% of the population will benefit from the Fed's new policies.

Unfortunately, this is simply insufficient to boost aggregate demand to the point of increasing employment to the levels the Fed is seeking.

This is why, as I had proposed earlier, the solution to the balance sheet recession is NOT more juicing as the Fed plans, which favors the speculator-borrower set - but raising interest rates which favors savers and national SAVING overall. As the savings balances then increase, more than 44 million will feel it's ok to spend, most of them seniors. This larger portion of the populace, perhaps 20%, is the driver for more employment as they spend more.

They are now hunkered down, and living on measly savings owing to Scrooge- level interest rates of barely 0.25%. They have no other choice, and certainly aren't about to go into the stock market and risk all especially as their Medicare expenses may well grow next year no matter who gets elected. Thus, they are tightening their purse strings.

Other people, not necessarily seniors but workers who saw their earlier investments lashed in the stock market meltdown of '08, have now re-aggregated their money in fixed income CDs, money market accounts, and money market funds. They also have no inclination to splurge, again, because the earnings on interest are pitiful. With scant disposable income, they have no latitude for consumption ....of the sort that'd fuel employment.

One can thereby estimate up to 40% of the potential consumer population is pulling in their purse strings because of lack of money. THEY are the ones who hold the Main St. economy in their hands. They are the ones Bernanke and the Fed are ignoring in favor of a 4-5% minority.

Another aspect overlooked by the Fed, and which justifies an increase in interest rates, at least to 1%, is the fact that there IS inflation! The Fed simply isn't measuring it! It's using an indicator which conveniently ignores grocery price inflation, as well as the pain at the pump - those increases, and those for medicines, medical treatments. THAT IS A LOT of INFLATION!

Only by living in a Fairy land can the Fed justify its continued absurdly low interest rates, which really only feed the speculators.

Finally, and as I said before, we need to go OVER the "fiscal cliff" big time! We need those tax revenues automatically installed (i.e. Bush tax cuts and payroll tax cuts sunset) by our legislators passively doing nothing. We need it because there's no other way we can amass those revenues, since the Repubs will never agree to do it on their own as part of any "deal". One hopes Obama has at least learned that lesson. Boehner's already made it clear that Repugs intend to keep on keeping on with the Norquist monkey wrench (no -tax pledge) even if Obama is re-elected. As he told Bob Woodward for his new book, if they can't make Obama a 1-termer they will torpedo his legacy. Well, then let ALL the BUSH TAX CUTS sunset! Middle class, so -called and for the wealthy. You get the latter into the mix by ceding the former and we need ALL that revenue anyway!

Make no mistake that speculative juicing as Bernanke plans carries risks. People who've seen their 401ks amp back up can relax and smile for the time being, but they better keep a wary eye.

Meanwhile, the rest of us not in stocks and holding only pass book savings or CDs, are getting set to tighten our belts and purses even more.

At least until Ben eases up in the real sense, and gives us higher interest rates on which we can live.
Posted by Copernicus at 9:08 AM