Yeshua May Have Had a Wife: Big Deal! 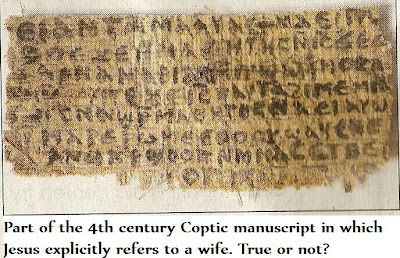 With apologies to Dan Brown and his 'Da Vinci Code', the latest brouhaha to strike orthodox Christianity is the uncovering of a 4th century Coptic script fragment (see image) in which Jesus (Yeshua) refers to "my wife" in a dialogue. Four words, evidently originally in Greek, and translated into "Jesus said to them, my wife" appear to provide evidence that Yeshua was married.

This is despite the fact that orthodox Christian tradition has long held Yeshua to be unmarried, despite there being no hard historical evidence to support it. We know, those of us who used to be Roman Catholics, that the Church was committed to the belief Jesus had no spouse. This was employed to support the view that the disciples also had no women (disproven by rigorous historical analysis, i.e. all the apostles were married except John) and that therefore RC priests had to remain "celibates". This amounted to a huge and stupid loss, given how we've seen so many priests waver and go to the dark side to prey on kids, altar boys etc.

Anyway, the Coptic fragment was presented by Karen King (an expert in the history of Christianity) to a 6-day conference held at Rome's La Sapienza University and at the Augustinanum Institute of the Pontifical Lateran University. Meanwhile, there was zero mention of King's discovery by any of the Vatican media, despite the fact they usually cover such conferences.

No wonder, they need time to think of a bunch of theological excuses or "explanations", i.e. "Christ was obviously referring to his Church, not a flesh and blood wife!" But if they tried that one they'd be instantly rejected since another line in the fragment reads: "She can be my disciple"

We know churches can't be disciples, only flesh and blood humans.

Other Christian apologists of orthodoxy haven't been so quiet. One (from Asbury Theological Seminary in Kentucky) arguing that "the language of intimacy is often used to talk about spiritual relationships". Huh?

He added that the fragment reflects a trend or practice embodied in the "sister-wife texts" of the Gnostics. These reflected a tradition whereby:

I'm sure modern women would be elated to read that, but most experts on the Gnostics (e.g. Elaine Pagels) don't buy it. Indeed, the Gnostics were amongst the most egalitarian of all early Christian groups. They'd never have reduced "female believers" to the role of chattel.

It would also not have been a big deal, in the Gnostic teachings, for Yeshua to have actually had a wife, since they didn't regard him as a special divine personage or "God man-Savior". It was instead the Pauline Christians who held him so. If he was no special divine creation or divine himself then marrying would've been no biggie.

"Whoever achieves gnosis becomes no longer a Christian, but a Christ."

In effect, in the Gnostic teachings, anyone - including females- has the capacity to become 'a Christ'. If one had to put Gnosticism's teachings in one summary phrase it would be:

"The relativity of Christhood"

Everyone, not just Yeshua, had full potential to become a "Christ" in his or her own right!

Pauline Catholicism, meanwhile, held there could be only one, on which all others had to depend for 'salvation'. This was the nexus for power and control over the masses. There would or could be no distribution of Christhood so if you wanted salvation you had to go through a rigid hierarchy and follow their magic recipes. As Christianity fragmented through the ages, these recipes became many and varied, until now one only had to "believe on the Lord Jesus Christ" as personal Savior and one is saved.

But this would've been the most abominable blasphemy to Gnostics, i.e. to select one personality and extol it over all others.

At the opposite end of the spectrum we have the strict Jewish view as revealed by Oxford biblical scholar Geza Vermes in his monograph ‘The Authentic Gospel Of Jesus’ . According to Vermes, the specialness of Yeshua in a spritual capacity was meant only for Jews, never Gentiles. In this sense Paul committed a great travesty and violation by taking Yeshua's role and extending it out to all Gentile Christians. As Vermes puts it (p. 415, op. cit.):

“The religion revealed by the authentic message of Jesus is straightforward, without complex dogmas, mythical images or self-centered mystical speculation. It resembles a race consisting only of the final ‘straight’ – demanding from the runners their last ounce of energy and with a winners’ medal prepared for all the JEWISH participants who cross the finishing line."

Irrespective of any special role for Yeshua, again there'd have been no prohibitions against marriage per se.

We shall await the outcome of this latest revelation but my bet is that by next month, Christian orthodoxy will have decided it's all a "tempest in a teacup" and Yeshua had no wife, and one must impose a broader "spiritual" interpretation.
Posted by Copernicus at 10:36 AM