The Dem Convention: Some Quick Takeaways 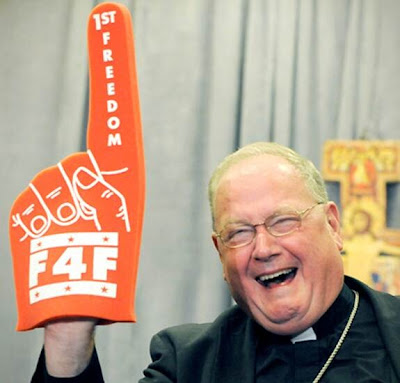 Timothy Dolan - had NO business giving a speech or "benediction" last night, since he fired salvos at the key points of many of the speakers. Dems need to learn it's not worth cheesy political pandering to try to garner a few crappy votes from troglydytes that have no common cause with your agenda.


First, the not so good. In fact, down right ugly!

Letting RC Cardinal Neandertal Tim Dolan Deliver an ending speech & “Benediction”:
Let me be frank: It was bad enough to witness the Dem Convention punk out two nights ago (after Reepo assholes bitched about no mention of “God” in the party platform- when "faith" was referenced 8 times according to Rachel Maddow) and then suddenly capitulate – actually the WH and Obama did – one reason the Left base still worries about strength of his convictions.
But having the primary “religious” opponent of Obama’s health plan deliver a final speech and “benediction”, just to make a politically pander for a couple lousy Catholic votes, was pathetic. It was the one downside of the whole convention and the only good thing was that most viewers (like me) had already switched off.
Dolan was hastily added to give the benediction at the DNC - probably because the testosterone lacking Dems didn't want to be "Out godded" after he agreed to do the same at the RNC. Sadly this miserable, sanctimonious ratfucker was given pride of place immediately after Obama. WTF were Obama, his campaign or the Dem convention brain trust thinking? Why must you play this stupid pandering game with the Reepos, to try to out-reepo them in religious bullshit?

You stand with those like Sandra Fluke and support her, as well as the mission and funding of Planned Paretnhood, and then summon an asshole like Tim Dolan who opposes all that she and liberated Dem women represent? C’mon!

The twit bloviated (before launching an attack on gays):
”Grant us the courage to defend life,” he said, and added, “Renew in all our people a profound respect for religious liberty, the first, most cherished freedom.”
But as I previously noted, “religious liberty,” is a fiction in the context he's invoking it. He and his retrograde Church have all the "liberty" they could ask for and nothing in Obama's health plan is taking that away. What it's doing is allowing secular and other employees of RC institutions to obtain the care THEY need, which is a different kettle of fish!

The good thing is maybe 20 people watched this reprobate, most switched off after Obama's speech.

Now that's off my chest, let me go on to the GOOD speakers and speeches, and positive observations:

Watching the Democratic Convention last night with our good friend, Muriah, and as the cameras panned across the arena, Muriah said first what was on our minds:

“Look at that! Look at the diverse people! THIS is the real America!”

Indeed. Black, brown, white faces as well as young and old, all together…as contrasted with the nearly uniform “white bread’ composition in Tampa last week. Despite the snarky Repup narrative that they have “the real Americans” and they will put “real Americans” in the White House in November, the fact remains they are talking bollocks. Their standard bearer is an out of touch venture capitalist who last year couldn’t even estimate the average cost of groceries for a week for the typical American, and keeps nearly $400m stashed in Swiss Bank accounts and Cayman banks – while professing he “loves America”. Yeah, right! You just prefer not to keep your money here, or use it for the positive general good.

The cavalcade of Dem speakers also reflected the diversity of the people:

A young Latina college student, the Hispanic mayor of San Antonio, a firebrand African –American (Deval Patrick) who urged the Dems to grow a spine, a nun, and a young, sensitive woman who was slandered by Rush Limbaugh- and has since been a powerful activist for women’s reproductive rights.

If one had to compare the two conventions to a football game – say a SuperBowl – one would likely invoke the blowout victory of the San Francisco 49’ers over the Miami Dolphins by 38-16 in 1985. While the Dolphins in that game were “one dimensional” – the Niners were multi-dimensional, able to perform on special teams, in the running game and with passing. They featured a star quarterback – Joe Montana – as the Dems featured their own master pilot last night, Barack Obama.

The Repugs meanwhile lacked a comparable depth of game as disclosed by their shallow speakers last week, culminating in an Alzheimers’-like performance by Clint Eastwood which stole Mitt’ thunder.

All the speeches were incredibly powerful, even the ‘minor’ speakers, like Sandra Fluke, and the heads of Planned Parenthood and NARAL. Michelle Obama blew Anne Romney right out of the water with her Tuesday night prime time speech, and even Joe Scarborough admitted on Wednesday morning, Romney likely suffered because she didn’t write her own speech like Michelle did.

Bill Clinton’s speech I already noted, and provided a powerful counterpoint to the GOP criticisms spewed last week. While the Dems had a dynamo in Bill, the GOOPers settled for an over the hill “mystery speaker” in Clint Eastwood who looked like a haggard old guy of 80+.

VP Joe Biden brought the diverse house down last night with his heartfelt acknowledgement of those in service, and his own family’s sacrifices. One saw sincerity because Joe has suffered true losses, including of his first wife and child in an auto accident. Meanwhile, watching the vacant face and smile of Paul Ryan last week, one beheld no sign he’s ever suffered or even sacrificed (though we do know he lived off his parents’ Social Security while he attended college). We got substance delivered with passion from Joe, while we got silliness and lies delivered with supercilious attitude from Ryan. No contest.

Joe also merits kudos for exposing the hidden, deceitful plan of the Romneyites to cut benefits for the existing 30 million Medicare beneficiaries as soon as they assume office, if people are stupid enough to vote them in. I already noted this in at least TWO previous blogs. I didn't use general relativity just simple math....errrrr....arithmetic....to show why it was so. That is, despite what the two shit wads proclaim (they "aren't gonna touch existing Medicare" for those 55 or over) the FACT is that if they propose to add $2 trillion to the Pentagon's budget and $4 trillion in tax cuts, the ONLY way to make that work is to carve into existing Medicare benefits! There is no fucking way they can meet their goals unless they do that, and that means cutting benefits for the existing 30m beneficiaries!

Obama’s speech was – contrary to talking heads this morning – one of his best two or three. It wasn’t laden with flighty oratory like his Denver speech in 2008, but then it couldn’t have been – given that he’s now endured 4 years of obstructionism from the GOP House, driven by the Tea Party rascals. But the speech, adopting a workman-like basis, was exactly what it had to be. Obama was also on with a number of brilliant and facetious remarks – such as (referring to the GOP formula for success)

“Feel a cold coming on? Take two tax cuts, roll back some regulations and call us in the morning”

Obama also reminded the Democratic base that he was never the focus of change, it was always the voters. “You made that happen!” he reminded them, in terms of the manifestation of his health care law. What he meant is that our driving need for medical care and support, energized him to complete this mammoth task. The irony, despite all the blunder buss from the Reeps, was that his final bill was almost a duplicate of Romney’s plan in Massachusetts but which he now disowns. (The Romney plan or “Romney care” has actually cut medical costs dramatically according to one MIT study)

Carping and Complaints from the REEP Peanut Gallery:

What can I say? The Republican base has always had a decided tendency to pick gnat shit out of sugar to find fault if the sugar belongs to Dem. If I’d been a reepo and witnessed the farce last week which passed for a convention, then watched the Dem’s three day spectacular, I guess I’d feel pissed too! Hence, the tendency to carp, piss and moan about the Dems. Some of the odd complaints I’ve seen which borders on the absurd:

1. The Dems moved the major speeches inside last night because they lacked the numbers to fill the stadium.

This is plain idiotic. The weather projections last night were for a “30% chance” of rain, heavy rain. At the time of her ABC News broadcast last night, Dianne Sawyer noted a “monsoon rain” that evening. Had the Dems not moved the venue inside they’d have looked like real asses for not attending to the safety of the masses. The complainers need to STFU and put a sock in it.

This is just plain daft. Sanders, for those who may not know, is NOT a Dem but a Socialist (listed as an ‘Independent’ in the congressional members lists), and only caucuses with the Dems. Hence, there’d be no legitimate reason to include him at all since he’s not registered with the party!

This was mentioned in some righty blogs as the counterpoint to Bush not being at the GOP convention, but there’s no analogy since Gore was never a president, while Bush Jr. was. Again, there’d have been no reason to include Gore in the speakers’ cavalcade any more than to include Dick Cheney for the Reeps. Past VPs are not where it’s at, and new blood is what’s used to ramp up energy. Hence, for instance, the choice of Rubio to speak for the Reepos and Mayor Castro of San Antonio to speak for the Dems.

Well he definitely did last night, tying it to the need to develop more alternative energy sources. Obama also referred to the most climatically disastrous summer in decades, from the wildfires here in Colorado and throughout the West, to the prolonged heat wave across the nation with more than 7,000 new heat records broken. Anyone who disputes global warming now is blind or brain dead.

At the end of the day, I expect a 3-4 pt. boost for the Dems from their Convention. And contrary to the delusions of some right bloggers (making me wonder what they’re drinking), look for Obama to take the November general election with a 310-228 electoral win. That's conditional on Obama's team and the Dems not giving any more spot speeches to the likes of pigs like Timothy Dolan!
Posted by Copernicus at 9:42 AM