Anatomy of an Asteroid Strike 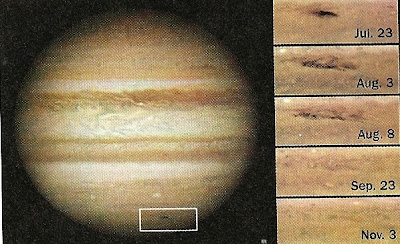 Readers with an interest in astronomy may recall the collision of the Comet Shoemaker-Levy with the planet Jupiter in 1994. That event was quite dramatic and reminded humans of how objects such as comets (basically balls of dust and ice) can effect cosmic cataclysms. It was also a cautionary tale for earthlings to monitor the skies and not be caught off guard (despite the budget cutbacks instigated by the Rs against "Space Guard" and other asteroid monitoring programs)

Have any large asteroids actually been similarly recorded? It turns out the answer is yes, and such an interaction has been documented in the June 1, 2010 issue of Astrophysical Journal Letters.

The authors note that:

"The dark impact “bruise” was first noticed on CCD images of Jupiter obtained by Wesley on 2009 July 19 at 14:02 UT, just rotating into view from Jupiter’s west limb"

This "impact bruise" is shown in the photo (left side) with white outline. The time sequence shown at the right side of the graphic shows the disappearance of the "blemish". Bear in mind Jupiter doesn't have a solid surface like Earth, but multiple layers of dense gases. Hence the images probably disclose photo-chemical or other changes associated with the impact, and hence...lessening of original impact effects.

What altered the interpretation to that of an asteroid strike? In the case of the impact of Comet Shoemaker -Levy in 1994,, the impacting fragments that initially comprised the comet head generated extended dark halos visible in Hubble's UV (ultraviolet) images. By contrast, one single body produced the effect seen in the graphic, and no halos were visible at all, leading to the asteroid conclusion.

How major would such an impact have been, if inflicted on Earth instead of Jupiter? If the estimate of diameters is correct, it would place the object that struck Jupiter in 2009 at the (Torino) scale of a "Mass extinction impact". This is applicable to diameter rangers from 100m (~330') to 1 km (3330' across). The last such documented event on Earth was the KT-boundary impact of 65 million years ago that devastated ~ 10 million sq. km., killing all extant dinosaurs and hundreds of other species.

The explosive release is in the range from 100 Megatons to 100,000 megatons TNT equivalent, and the Jupiter impact object was most likely around 75,000 megatons.

In other words, let's be grateful it struck Big Jupe and not Earth!
Posted by Copernicus at 12:45 PM